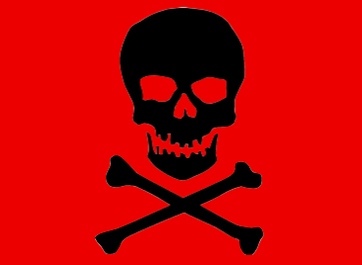 Toxic Medicines
The Safe use of Potent Medicines
Introduction
In all Traditional Medicine systems, there are toxic and potentially Fatal medicines that are used from the Plant, Mineral and Animal Kingdoms. Despite the fact that many of these medicines are prohibited from use in modern western society, they continue to be used in many traditional cultures, especially in the East and Middle East, but also in Africa, South America and elsewhere.

Paracelsus famously said "Only the Dose makes Poison". And this point is most important. Literally anything can be toxic in overdose, even water, the most common substance in our body, and our second most essential input after air.

With this in mind it stands to reason that these medicines are not "Toxic", but "Potent". Potent in that they can potentially be toxic if overdosed or misused.

"Only the Dose makes Poison"
(Paracelsus)

So the primary concern is how close the therapeutic dose is to the toxic dose. If an herb is used in doses of 500mg, and 2.5 grams could be fatal, this represents a safety factor equivalent to many common and over-the-counter medicines already in use.

Of course, Safety Factor is not the only concern as far as toxic or potent medicines are concerned. For example, some medicines are accumulative toxins which may have a good Safety Factor in acute usage, but become toxic with continued use as they accumulate in certain organs. The heavy metals are examples of this.

"Even a strong poison can become an
excellent medicine if administered properly,
on the other hand even the most useful
medicine acts as a poison if not handled correctly"
(Charak)

Toxins can be divided into the types of toxic substance. An overview of primary toxic categories of herbal medicines includes:
All of these functions have potential therapeutic effects. For example, Irritant and Caustic medicines may be stimulants in therapeutic doses, Cardiotoxins may be useful Heart medicines in correct dose (Digoxin from Foxglove being an example), some Hemolytic medicines can be effective against Cancer, and some Neurotoxins can be used for Nervous diseases (such as the use of Scorpion and Centipded in TCM).

Of course many Toxin medicines are effective against pathogens such as bacteria or parasites, and some potently increase immune response.

Poisoning can be divided into Acute and Chronic.

Acute Poisoning is achieved by taking an excessive dose, that is, a dose beyond therapeutic effect. In some cases symptoms develop quickly while in other cases symptoms maybe delayed for days.

Chronic poisoning occurs with repeated exposure over a period of time. Only certain poisons are prone to chronic toxicity as many poisons are broken down or expelled from the body quite rapidly. When the half life of a drug is 24 hours or longer and the patient is taking doses daily, an accumulative effect leading to chronic poisoning is a potential. Of course, this can be averted by having regular pauses in treatment. For example a pause after 2–3 weeks of using herbs that contain pyrrolizidine alkaloids can avert chronic toxicity.

Heavy metals such as Lead and Mercury are apt to cause chronic poisoning with repeated low dose exposure. There is some interesting research to show that Heavy metals processed according to Ayurvedic texts can be given in therapeutic doses without toxic effects or accumulation. The most interesting have been Mercurial medicines and Cinnabar in particular. However, far more research needs to be done before these heavy metals are accepted into modern practice in the West.

Three principle ways are used to prepared toxic medicines: Another method, occasionally recommended, is to keep a harsh or irritant medicine for a year or 2 before using it. This helps to lessen the toxic compounds due to natural degradation.

There are various specific and unique ways of preparing the various toxic medicines, but the above three methods cover the large majority. Some toxic medicines have a number of stages that use a combination of the above methods.

Apart from Narcotic alkaloid-containing plants, the most controversial class of alkaloids in Traditional Medicine are the pyrrolizidine-containing herbs. This is found in a number of important herbal medicines including Comfrey, Coltsfoot, Borage, Cynoglossum spp. etc. However, these alkaloids have been found toxic to the liver, primarily in animal studies. There has been a general ban on herbs containing these alkaloids in many western countries, despite many of these herbs having an long history of apparently safe use.

Some of our most potent medicines are alkaloid-containing, unfortunately, many of these are illegal for use and are therefore obsolete in modern practice..

Another important toxic Phytochemical in traditional medicine is Aristolchic acid, found primarily in Aristolchia (Birthwort) and Asarum species. Aristolchic acid is toxic to the Kidneys and Liver, is mutagenic and carcinogenic. Nevertheless these herbs have been important medicines in Traditional Medicine, and while Aristolchia species are banned for use in many countries they are still used in Unani, TCM, Ayurveda and Tibetan Medicine, although sparingly. Asarum species are still frequently used, particularly in TCM.

It should be pointed out that these herbs are most typically used in formula where they constitute a small proportion, often around 5%. Despite this, the Birthwort species are obsolete in modern western practice.
Principal Toxic Medicines in MedicineTraditions


Minerals
Primary Mineral Toxins are those based on Lead,
Mercury and Arsenic. Other heavy metals can also be Toxic.
Mercury
Litharge
Minium
Arsenolite
Orpiment
Realgar