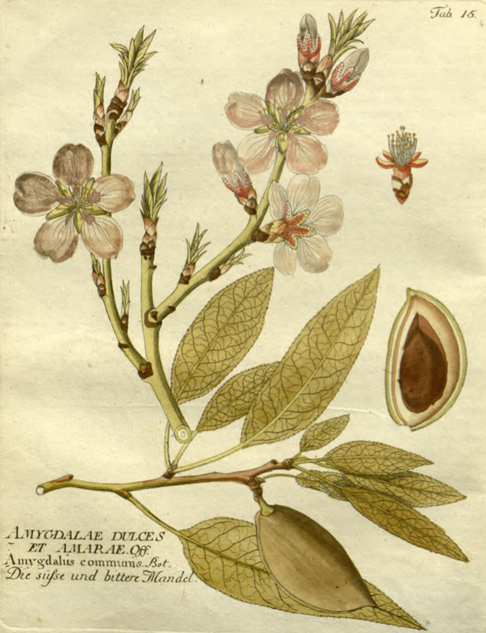 3. Clears Heat from the Liver, Opens Obstructions:
-pains of the sides
-very good for all old obstructions of the Liver and Spleen.
-'prevents drunkenness if 5 or 7 are taken beforehand' (Dioscorides)
-‘They delay drunkenness’. (Tacuinum Sanitatus)

4. Promotes Urine:
-difficult Urination, Strangury, painful urination and Stones.
-Avicenna regarded the highly in obstruction of the Kidneys.
-Dioscorides said the Gum of the Tree was good for stones.

6. Externally:
-applied with Vinegar or Oil of Roses to the temples for Headache. (Dioscorides)
-the Oil dropped into the ears is very good for ear problems including Earache and Tinnitus; ‘more agreeable to the ears than any other Oil’.
-they have been applied externally to promote Menstruation.
-externally, the expressed oils of both this and the Sweet may be used for hardness and pains of the Nerves.
-with Honey, they are applied to the bitings of Mad Dogs.
-applied to Herpes. (Avicenna)
-as a scrub to remove Freckles
-‘cleanses the skin from scurf, morphew, spots and blemishes, if it be mixed with Oil of Scorpions, and so used’. (Salmon)