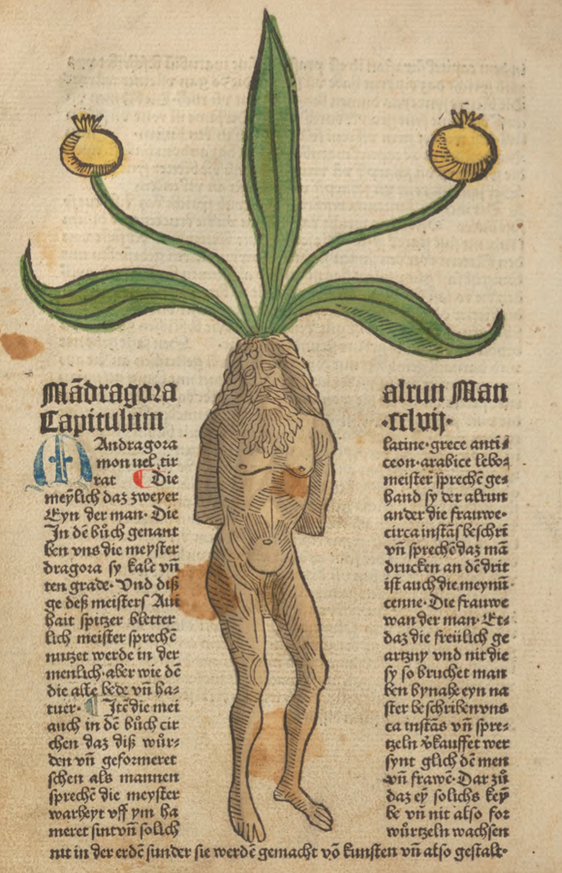 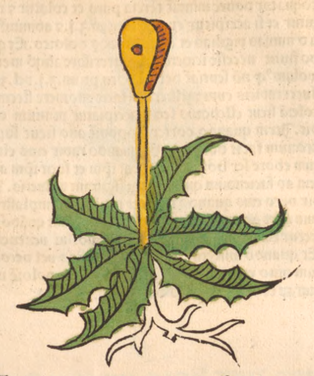 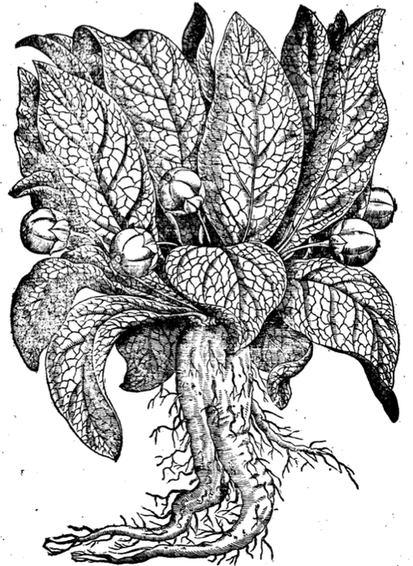 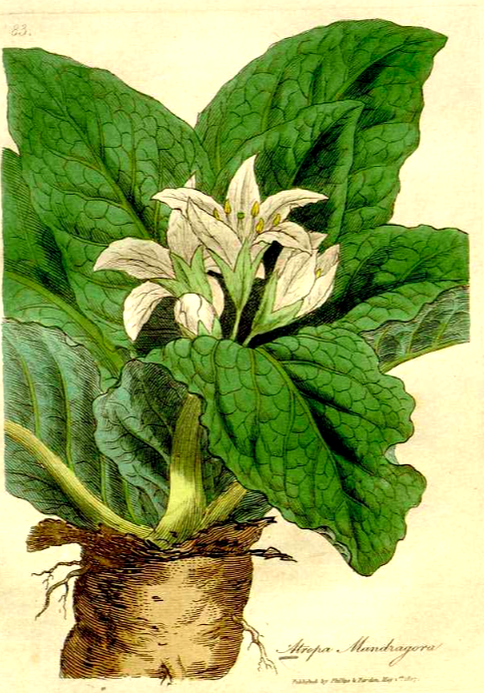 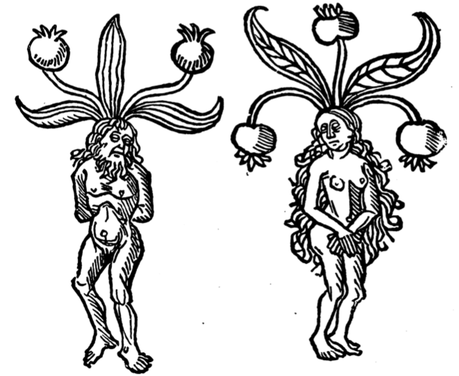 2. Moves the Blood, Promotes Fertility:
-promotes Menstruation and clears a Dead Fetus
-long used for female Infertility (Theophrastus mentioned it in the 4th century BC; also in the Bible)

DOSE:
‘Seldom used internally’, although preparations of it were used as an anesthetic.
ROOT POWDER: 30–90mg, up to 120 or 150mg;
ROOT TINCTURE (1:10 in 70% alcohol): 5–10, or 15 drops, 2-3 times daily; or 5 drops of the Tincture in 100mls. water, take a teaspoonful hourly.
For cautery and surgery, 1–1.5 drams of the root juice was taken with Hydromel "but if taken too much it kills". (Herbarius latinus, Petri, 1485)
Most commonly used externally in Oils, Tinctures and Inhalations for pain, and to promote sleep or anesthesia for surgery, cauterisation and amputation.

CORRECTIVES:
Ivy berries correct the effect of Mandrake fruit on the brain and senses, according to Tacuinum Sanitatus

EXTERNALLY:
15. Abscess, the oil can be applied, the fresh leaf can be beaten and applied, or the leaf powder mixed with a suitable juice and applied.
16. Severe Eye pain: Saffron, Myrrh, Frankincense, Opium, Gum Arabic (equal parts). Form pills; to use dissolve in Tincture of Henbane or Mandrake and paint over the eyelids and temples. (Syrian 'Book of Medicine', Budge, 1913)

​
Cautions:
1. Toxic in overdose. Generally only used externally.
2. Not used during Pregnancy
3. '... for through the great coldness which Opium, and Hyoscyamus, and Mandragora root possess, they kill the natural heat of the ordinary member of the body, and bring the sick man into great and inconceivable peril'. (Syrian 'Book of Medicine', Budge, 1913)

Main Preparations used:
Oil prepared of the Bark decocted in Oil was used for strong pain
History
How to Make Men Mad with Mandrake
​
We have told you, That a small dose brings sleep; a little more, madness; a larger, death. Dioscorides saith, That a Drachm of Morion will make one foolish; We will easilier do it with Wine, which is thus made: Take the Roots of Mandrake, and but put them into new Wine, boiling and bubbling up; cover it close; and let them infuse in a warm place for two months. When you would use it, give it to somebody to drink; and whosoever shall taste it after a deep sleep, will be distracted, and for a day shall rave: but after some sleep, will return to his senses again, without any harm: and it is very pleafant to behold. Pray make trial. (Natural Magick, Porta, Giambattista della, 1669)
Concerning the kahina root [Mandrake], and the answer of Dioscurus about the wonderful things which it doeth among men.
​
© MedicineTradition 2015–2022