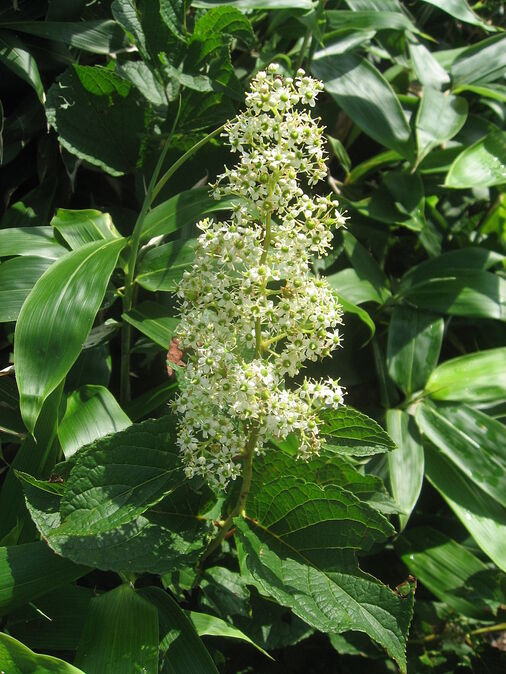 Parts used:
Root (bark is generally scraped off due to its excess toxicity)

DOSE:
1. Due to the fact that some people experience severe poisoning with therapeutic doses, if it is used, doses should be low to begin with (3 grams), increasing gradually.
2. It is decocted for at least 1 hour (up to 2–3 hours when full doses are used) to lessen toxicity.
3. The dried root that has been stored for a year is less toxic.
4. Generally only used for 2–3 weeks without a break.
5. It is best taken after food.
DECOCTION of the UNPEELED ROOT: 6–9 grams (up to 12 grams), cooked at least 2 hours
DECOCTION of the PEELED ROOT: 10–20 grams
POWDER of the PEELED ROOT: 500mg–1½ grams
The decoction, tincture, ointment or powder mixed into a paste, as well as the paste of the fresh leaf can be applied topically to the skin, but should not be left for more than 30 minutes.

PREPARATION:
Generally the root is peeled as the outer bark is most toxic.

COMMENT:
1. This is not a Traditional Medicine in China, but was added only recently due to its effectiveness in treating two stubborn conditions: chronic skin disease with itching, and chronic painful obstruction (Rheumatoid arthritis). It has also demonstrated usefulness against various Cancers.
2. It is standard practice in China to monitor blood, and liver and kidney function during use.

CORRECTIVES:
1. Licorice has been used with Tripterygium to lessen the toxicity. and research has proven Licorice to significantly reduce Liver injury.
2. Astragalus Huang Qi, Codonopsis Dang Shen, Lycium Gou Qi Zi (Goji) are typically used in China to correct the harsh effects and prevent damage to the Qi and Blood.
3. Research has demonstrated that Lysmachia Jin Qian Cao can reduce or neutralise the toxic effect of Tripterygium which was most pronounced in a ratio of 1 part Lysmachia to 2 parts Tripterygium. In this ratio, a synergistic anti-tumor effect was noted also. (See the research here)
4. Rehmannia Sheng Di Huang and Panax notoginseng San Qi together were shown to ameliorate the nephrotoxic effect of Tripterygium. (See the research here)
Main Combinations:
1. Severe Painful Wind-Damp obstruction:
i. the decoction is often used alone for Rheumatoid Arthritis
ii. Tripterygium Lei Gong Teng with Angelica pubescens Du Huo, Gentiana macrophylla Qin Jiao, Clematis Wei Ling Xian
2. Severe itching, Tripterygium Lei Gong Teng with Saposhnikovia Fang Feng, Tribulus Ci Ji Li
3. Leprosy, Cancer, the decoction is often used alone.
4. Stubborn Dermatitis, Eczema, Psoriasis, the powder is mixed with water or a suitable decoction for topical use, or the leaf can be beaten to a paste for topical applicxation.

Cautions:
1. Very toxic. Toxic effects may be seen with therapeutic doses. Overdose may be lethal. The leaf, shoots and stems are highly toxic and must not be used. It has been responsible for a number of deaths in China.
2. Avoid in the Young, Old, Weak, during Pregnancy or Lactation.
3. Should not be used in Liver, Kidney or Heart disease.
4. Individual tolerances means that some people may have severe poisoning even with normal doses.
5. When used topically, it should not be left on for more than 30 minutes otherwise severe irritation and blistering may occur.

TOXICITY:
1. Lethal doses are from 30–60 grams. (Bensky)
2. Tender young twigs are lethal in doses as low as 12 grams.
3. The fresh root and bark are more toxic, the peeled root is less toxic, and the toxicity is reduced after having been stored for a year or more.
3. Nephrotoxicity of Tripterygium wilfordii Hook. f Preparations: A Systematic Review and Meta-Analysis.
4. Efficacy and safety of Tripterygium wilfordii Hook F for CKD in Mainland China: A systematic review and meta-analysis.