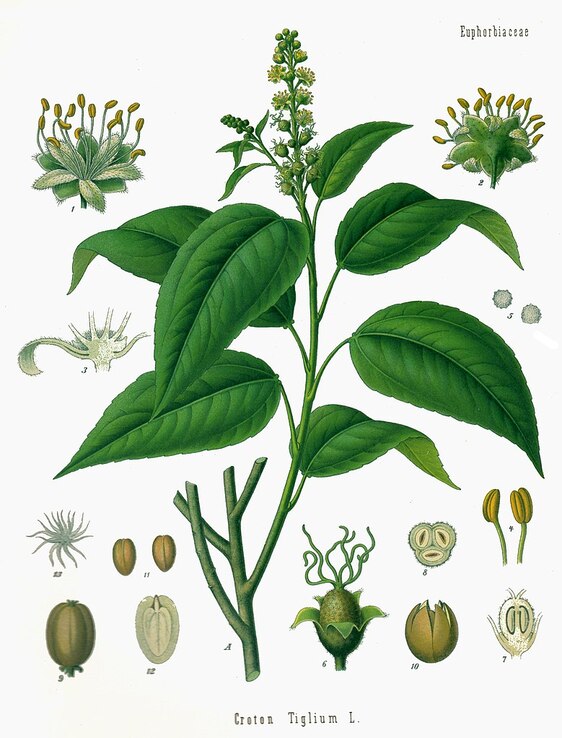 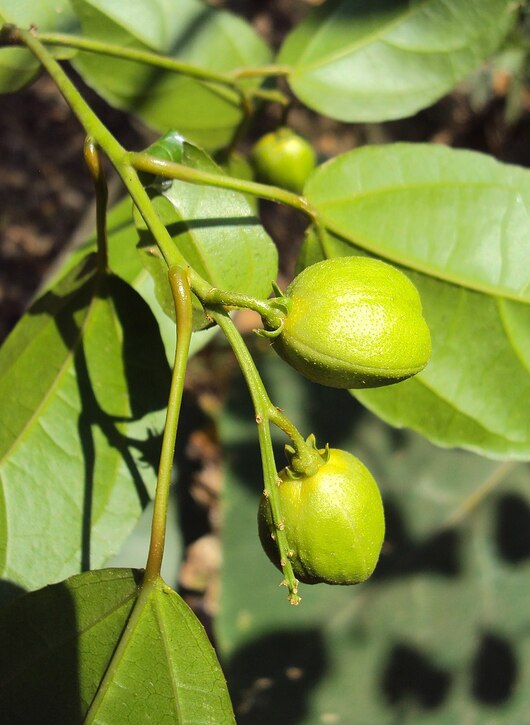 Classification:
E. Cathartics
Uses:
1. Warms and Purges Cold Accumulation:
-cold accumulation; acute abdominal pain and distention
-chronic and obstinate constipation from cold
-food stagnation, as well as chest and abdominal distention.
-'purges all kinds of stagnation in the Five Viscera and Six Bowels'. (Shen Nong Ben Cao)
-‘As a purgative it is invaluable in cerebral hemorrhage, coma and insanity on account of its minute dose and the rapid and complete evacuation of the bowels which it causes in obstinate constipation and intestinal obstruction from impacted feces, Tape Worms, Dropsy, Hydrocephalus, Uremia, Delirium tremens, etc.’ (Gems of the Siddha system, Ramamurthi Iyer, 1986)

3. Clears Phlegm from the Chest:
-wheezing and difficulty breathing from Phlegm obstruction
-fullness and distention in the chest from excess Phlegm
-early stage Consumption, and racking pain in the Lungs;
-Lung abscess with excess Phlegm
-very small doses are used in India for Whooping Cough in children.
-TCM also uses it for sore throat from wind.

8. Externally:
i. Abscesses that have suppurated to promote healing
ii. severe Ulcers
iii. the Oil is applied externally, diluted with 3 parts of olive oil, as a counter-irritant in various types of pain including neuralgia, gout, arthritis, sciatica and rheumatism.
iv. in liniments for bronchitis, asthma and throat diseases including laryngitis.
v. applied instead of the older blister plasters.
vi. warts, furuncles, tumors and various dermatitis, as well as tinea (liniment is made with 1 part Croton Oil: 7-10 parts Olive Oil).

PREPARATION:
Note in all the preparations the green sprout (cotyledons) in the center of the seed are removed as they are most toxic.
1. Milk-prepared Croton:
i. Siddha Preparation: Remove the testa and cotyledons, then boil the kernels in milk 3 times. Then wash in water, and dry well. (Siddha)
ii. Ayurvedic Preparation: testa and cotyledons are removed as the preceding, the kernels are tied up in cloth and steamed with milk in Dola Yantra (pot for steaming) for 3 hours. This is repeated three times. (Ayurveda)
2. Stir-fried Croton seed (Chao Ba Dou)
The seeds can be burnt until yellow-black, then beaten to a paste and dried. This is used for chronic abdominal diseases such as Food Stagnation and abdominal masses. (TCM)
When carbonised until purple-black and the smokle has stopped, it was said to act as a mild laxative. (Wang Hao Gu)
3. De-fatted Croton Seed (Ba Dou Shuang)
The testa and cotyledon is removed, then the seeds are beaten to a paste. The paste is pressed between blotting paper which absorbs most of the oil oil. This is called De-fatted or De-oiled Croton seed and is most commonly used in modern TCM..
4. Wine-prepared Croton:
Break 1 oz. of the seeds into small pieces, then stew with 70 mls. each of Wine and Sesame oil until the liquid is consumed. Grind the drug into a paste to use. (Ben Cao Gang Mu)
5. Vinegar-prepared Croton:
The seed may be stewed in vinegar, then washed and dried. (Li Shi Zhen)
6. Aloeswood-prepared Croton:
When soaked in a decoction of Aloeswood (Chen Xiang) its action both ascends and descends. (Li Shi Zhen)
7. 'The drug can be processed to make alchemical drugs. It is then good for nourishing blood and improving the complexion. It makes one more enlightened'. (Ming Yi Bie Lu)
8. A more elaborate preparation from the Siddha system is given below.

DOSE:
'If Ba Dou is used in bigger dosage, it has the function of treating a serious disease and dispersing the invading pathogenic factors. If it is used in a small dosage, it has the function of harmonizing the interior' (Li Shi Zhen)
Prepared Seed in Powder: 60–125mg (up to 300mg);
Seed Oil has been taken in doses of half–1 drop.
Half–1 seed was a traditional dose in India.

Cautions:
1. Very toxic in overdose
2. Not used in the very young, weak or pregnant, or in those with Heart or Kidney disease.
3. Not used if there are hemorrhoids, gastrointestinal or renal inflammations, peritonitis, or for those with weak-type constipation.
4. Not used in Fever
5. Not applied to the head, face or genitals, and should not be applied to open skin. Application may cause itching, burning and swelling.
6. It consumes Yin and was accounted bad for male sexuality.

TOXICITY:
1. Very toxic when unprepared, 1 gram of the unprepared seed can kill an adult. It should only be used in prepared form.
2. Overdose produces symptoms 1–3 hours after ingestion. Symptoms include nausea, vomiting, severe abdominal pain and severe diarrhea with blood and mucus. It irritates the Kidneys so may cause hematuria, dysuria and proteinuria.
Severe poisoning causes hypotension, cyanosis, rapid heat rate with weak pulse, respiratory depression leading to shock.
3. Doses of 20 drops of Croton oil are lethal to human.

ANTIDOTES:
A large number of antidotes have been given in Ayurveda and TCM:
1. If it causes griping, vomiting and excessive purging, a good draught of Lime juice, taken several times, is an excellent antidote. Another similar remedy is 4-5 oz. of Lemon juice taken with an equal amount of Conjee or Water. This is to be followed with a dose of Castor Oil. (Ayurveda)
2. Coriander seed is given with Curds and Sugar. (Ayurveda)
3. Cardamons macerated with Curds is also used. (Ayurveda)
4. Otherwise, in an overdose an emetic must be used immediately, followed by Olive Oil, Milk, or Egg Whites. Mucilage fluids and pain relievers are then given to ease the pain and inflammation.
5. Enough Ghee can be given to act as an emetic. (Ayurveda)
6. In Indian Medicine, Antidotes include washing out the stomach with gruel and mustard, or Olive Oil, or Diluted milk (4 oz. in 1 pint of water), and demulcent drinks including Linseed tea, Milk Whey, gruel etc; Opium and stimulants are also used. (Siddha)
7. In India, Borax is also said to be the antidote to Croton poisoning. Borax is often used in formulas with Croton.
8. Decoction of Isatis Ban Lan Gen with sugar. (TCM)
9. Peanut oil in doses of 60–120mls. (TCM)
10. TCM has developed a number of compound formulas for Croton poisoning (Chinese Medical Herbology and Pharmacology, Chen and Chen, 2001):
i. Figwort (Xuan Shen) 12 grams, Calamus (Shi Chang Pu) 15 grams, taken every 4 hours for 3–4 doses.
ii. Mung bean (Lu Dou) 150 grams, Phellodendron Huang Bai 9 grams, Licorice 9 grams, taken every 3 hours for 2–4 doses.
iii. Coptis Huang Lian, Phellodendron Huang Bai, Paeonia Bai Shao, Plantain seed (Che Qian Zi), Dendrobium Shi Hu

Preparation:
i) First, the entire seed is boiled in the Dung and Urine of a Cow or Buffalo.
ii) Then the inner seed is separated from its cover, the cotyledons are removed
iii) next boil in Lime juice, and after that in Vinegar.
iv) next boil with Rice and Water, just like cooking Rice. Then dry them in the shade.
v) then soak in Human milk for a day, then dried again in the shade.
vi) Lastly, they are fried with a little Ghee or Castor Oil. Excess oil is wiped off and they are kept for use.

A Variation:
i) Boil the seeds in a mixture of the juice of fresh Cow Dung, Tamarind leaf and Red Earth for 6 hours
ii) Wash and clean the seeds, then break open and reserve the endosperm, throwing away embryo and seed coat
iii) Cook the endosperm with Rice, just as if cooking rice.
iv) Remove, wash, grind with Lime juice to a paste, then dry.

This is a common method of Purification in Siddha Medicine.
The purification is said to remove or greatly decrease the toxic acids in the seed, while still retaining the active and useful principles.
The purified seeds are much used as a purgative in the Siddha system, and many compound Pills are made with these as the prime ingredient. These pills not only produce copious watery stool, but also stop the complications of many diseases, and cure many others. When combined with suitable ingredients, and taken in appropriate vehicles, they are used as carminatives, febrifuges, hepatics, anti-lithics, diuretics, anthelmintics, expectorants, and antidotes. They are good for general pain, pain in the joints, muscles, or bone marrow, including these problems associated with Syphilis and Rheumatism. They are used in formulas for the Poisonous Bites of Snakes, Insects, and other Venomous Beasts.

Research has found the purified seeds are not merely acting as an intestinal purgative, but have several other distinct functions and benefits:
i) They irritate no organ.
ii) They may safely be used as a common purgative, even in children;
iii) Proper doses do not produce violent catharsis.
iv) If a Cathartic effect is desired, it can be adequately controlled by simple intestinal astringents.
v) Combining with such substances as Saffron and Musk enhances efficacy.
vi) ‘Many alarming symptoms are controlled by a first dose of the Compound Croton seeds preparation’.
vii) It is of such benefit in that only a small dose is needed.

‘In many instances, after giving this purgative, no further treatment will be required’.

The purified seed is more effective than the Oil in many diseases, and much safer to use. (The Gems of the Siddha System, T. G. Ramamurthi Iyer, India, 1986)
© MedicineTradition 2015–2022