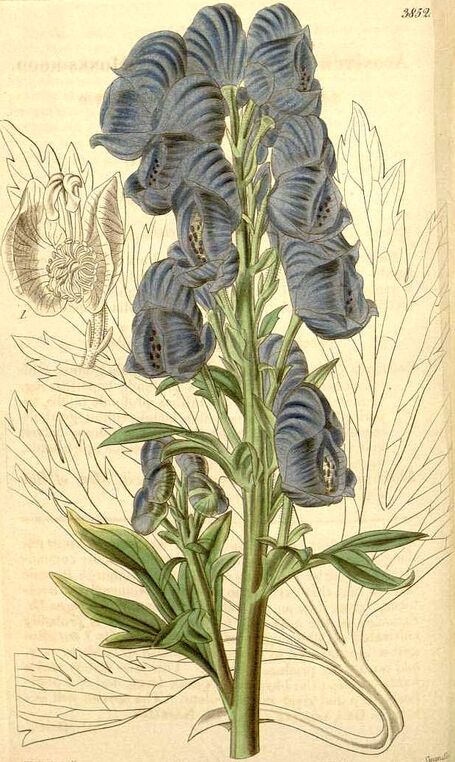 Botanical name:
Aconitum spp.
1. A. carmichaeli (Chuan Wu, Wu Tuo)
2. A. kusnezoffii (Cao Wu)
Over 20 species are said to supply Cao Wu, and a number also supply Wu Tuo.
These are equivalent to the Western Aconitum napellus and the Tibetan 'Black Aconite'

DOSE:
1. Best to always use an initial low dose (500–1000mg) to ascertain individual reaction to the herb, then increase dose as needed.
2. The Aconites should always be decocted for a prolonged period of time, 45 minutes to 2 hours before adding other herbs. They should also be decocted with fresh Ginger or Licorice, which can both enhance the effectiveness in clearing Wind-Cold-Damp as well as lessening toxicity.

PROLONGED DECOCTION: 1500mg–3 grams (cooked for at least 60 minutes before adding other herbs)
POWDER: 30–100mg (best to stir-fry until scorched when used as a powder)

COMMENT
1. These medicines are extremely toxic and are responsible for a number of deaths each year in China. They are usually wild-sourced with these being far more potent than the Aconitum Fu Zi which is generally farmed. In addition, Aconitum Fu Zi is the secondary or 'daughter' root whereas Aconitum Chuan Wu, Cao Wu and Wu Tuo are the primary root, which is older, stronger and more toxic. The alkaloids are heat sensitive and are destroyed by heat. The processing and long boiling denatures the alkaloids and produces cardio-tonic effects, but the analgesic effect is lessened. The raw root can be used in washes or tinctures for external use only to relieve severe pain (similar to how Aconitum napellus has been used in the west).
2. These Aconite roots are more effective to resolve Wind-Cold-Damp pain, but are less tonifying. Aconitum Fu Zi is milder in effect in relieving Wind-Cold-Damp pain, but is milder and has a more tonifying effect. It is the safer form to use Aconite internally.

PREPARATION:
Note is each of the following preparation methods the root will be tasted to check for numbness and tingling. If it still shows these effects it is submitted to further processing.
1. Simple Preparation:
The stems and daughter (secondary) roots are removed, the roots are cleansed, then boiled in water several times. They are then removed, partly dried, then sliced and dried completely.
2. Other Preparation:
The roots can also be prepared similarly to Aconitum Fu Zi.
3. Dry-Fried:
The prepared dried roots available on the market can be dry-fried until scorched to be used in powder form. This will lessen any residual toxic alkaloid content. It is the best way to use the powdered root.

Cautions:
1. Lethal in overdose.
2. Not used in Pregnancy
3. Not used for Yin deficient Heat

ANTIDOTES:
1. Licorice
2. Ginger
3. Mung Bean
4. Maltose and Honey
5. Purified Borax is regarded as an antidote in Ayurveda. Recent research has shown it to be an effective antidote to both acute and sub-acute Aconite poisoning.
6. Atropine negates toxic side effects.
7. Xylocaine reduces death rate after poisoning by Aconite.
8. See Aconitum Fu Zi for more Antidotes.