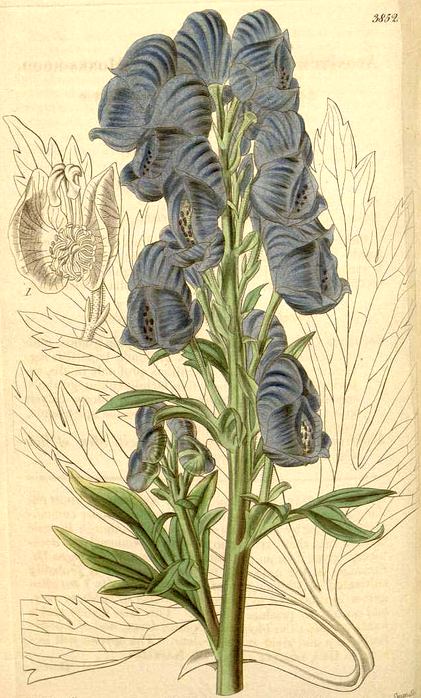 LEFT: Bai Fu Pian (White Aconite slices, without bark); RIGHT: Hei Fu Pian (Black Aconite slices, with bark)
More Photos of Aconite
The Aconite Species of the West
Experiments on Aconite of Dr. Storck
Botanical name:
Aconitum carmichaeli (syn. A. chinense)
A number of Aconite species are used in the various systems:
1. Europe: A. napellus
2. India & Tibet:
a. A. chasmanthum
b. A. ferox (Nepalese Aconite)
The above species are synonymous in effect, just the strength may vary. This is especially so with Wild versus farmed varieties. In TCM, the majority of the root of Fu Zi is farmed, whereas other varieties of Aconite (Chuan Wu, Cao Wu) are gathered from the wild and are much more toxic. It appears most of that on the Indian market is wild-crafted, leading to its possible greater strength.

SYMPTOM PICTURE:
According to TCM, the symptoms picture for a patient appropriate to the use of Aconite is: a feeling of coldness, cold limbs, a pale, flabby tongue with a white or greasy coating, a weak pulse or a deep and slow pulse and clear urine. Various other symptoms may be present such as lower back pain and weakness, cold pain in the joints, impotence.

DOSE:
1. The root is always bought ready-prepared in factories. Therefore, it is common practice for a practitioner to taste a new batch of Aconite. If it is numbing to taste, it is still potentially toxic.
2. When decocted (typical use in TCM) it must be cooked for up to an hour (30–60 minutes before adding the other herbs). Larger doses are boiled for longer periods. In addition, cooking with Ginger and/or Licorice can enhance its function of warming Yang while reducing toxicity.
3. The root should be soaked and washed in water before decocting to remove salts used in its preparation.
4. If the root is used in powdered form, the broken pieces of root should be dry-fried in a hot wok until they become slightly yellowed to further reduce toxicity.
5. In any dosage form, the addition of Licorice and/or Ginger root is wise.
6. Individual response can be varied. Some people may experience mild side effects within the dosage range while others can take far larger doses.
7. Tolerance develops meaning doses can generally be increased if required.
8. It is always wise to begin with lower doses, increasing as needed.

In the 'Sichuan Fire School' (Huo Shen Pai) large doses of aconite are used, sometimes up to 200 grams per day.
In these cases:
1. Begin with lesser doses increasing as required.
2. Large doses require longer boiling. For example, a 50 gram dose may be boiled for 2 or more hours; 100 grams for 4 hours.
3. It is always advisable to use adequate amounts of correctives (detoxicants) such as Ginger and Licorice.
4. Individuals response to the drug dictates how far the dose is raised.
5. Formulas specific to the 'Huo Shen Pai' School are generally used when large doses are given.

PREPARATION:
Various methods of preparation are employed. Processing is never carried out by practitioners, but the root is prepared in factories to be supplied to the medicine market. There are a number of different preparations used in China, but generally only White and Black types as pictured above are available on the Western market.
1. Prepred Aconitum Fu Zi (Zhi Fu Zi):
Usually, preparation involves soaking a number of times in water or brine, and cooking with herbs or salts, then drying. The modern method of processing is more elaborate but based on this same process.
A variation: Soak the root in water until it cracks, peel off the bark and stew the root. Remove and cut into slices while hot. Stir-fry the slices until yellowed and dried. (Li Shi Zhen)
2. Lime-prepared Aconitum Fu Zi:
Soak the fresh sliced root in water for a day. Remove and cover the pieces with Lime, changing the Lime several times until the drug is fully dry. (Han Bao Sheng)
3. Aconitum Dan Fu Pian:
Prepared with Licorice and Soy bean. It is less toxic than Hei Fu Pian and Bai Fu Pian.
A traditional variation of this is to soak the sliced root in water with Black Soybeans for 5 days, then remove and dry in the sun. (Lei Xiao)
4. Dry-fried Aconitum Fu Zi (Pao Fu Pain):
The fresh root is Dry-fried in sand. This is the least toxic preparation.
Traditionally, the roots were buried in hot ashes until they crack but before they are over-scorched. Then they are taken out and broken to pieces. Some stated the ashes of willow tree should be used.
5. Vinegar-prepared Aconitum Fu Zi:
Soak the fresh root in Vinegar in a sealed vessel for 1 month. Then remove and dry in the sun. (Li Shi Zhen; this method.
of processing is no longer used)
Vinegar prepared from Barley porridge was also used. The drug was steeped for several days in the sour Barley water, stirring daily, then dried in the sun for 100 days. (Su Song)
6. Urine-prepared Aconitum (India):
In India, the root is prepared by soaking in Cow urine for 3 days, changing the urine daily.
In TCM classics, the root was steeped in boys urine until completely soaked, then stewed in the same. It is then removed and dried. It is better with a little Salt added.
Another version suggested soaking the roots in Boy's urine for 14 days, then slicing into 4 pieces. Then wash and soak in water for 7 days, changing the water daily.
This reduces toxicity and promotes the downward function of Aconite. (Zhu Zhen Heng)
7. Licorice and Ginger Prepared Aconitum Fu Zi:
Put one root in half a cup each of Salt Water, Ginger juice and Boy's urine, along with 6 grams of Licorice. Stew the root until well cooked. Remove and leave for a night. The toxicity is then much reduced. (Li Shi Zhen)
8. Unprocessed Aconitum Fu Zi:
The unprocessed product is not generally used internally. It is very toxic, but is sometimes used in external medicine (but should never be applied to broken skin).
The Tao Hong Jing states that when decoction of fresh Ginger and Aconitum Fu Zi was prepared, the fresh root was used. While Ginger corrects the poison of Aconite, the fresh root is not used internally today.
Li Shi Zhen said if raw Aconitum Fu Zi is used, it should be processed as follows: the roots are soaked in water until the roots crack, then the bark should be peeled off. Then it is boiled, sliced, dried, then stir-fried until yellowed inside and out. Leaving the prepared drug for a while before using further reduces the Fire Toxin. (Li Shi Zhen)
However, in parts of Sichuan, the dried, unprepared root is occasionally used in cooking where it is stewed with meat for 6 hours as a traditional dish (personal communication).

SUBSTITUTES:
1. Delphinium denudatum (Unani)
2. Various toxic blue-flowered Aconite species can be substituted for Aconitum Fu Zi, the main difference being the degree of toxicity. Wild roots and 'mother' roots are most potent, the farmer 'daughter' roots after correct processig are least toxic. Aconitum Fu Zi is regarded as being more tonic, the wild and mother roots stronger to clear Wind, Cold and Damp.

COMMENT:
1. This is a very potent medicine and is responsible for more deaths in China than any other single herbal medicine. Nevertheless, it is a potent and indispensable medicine in TCM, Tibetan Medicine and Ayurveda.
2. There are a number of types of processing methods used.
3. There are two main varieties used: Black Aconite Pieces (Hei Fu Pian) and White Aconite Pieces (Bai Fu Pian), the former retaining its black root skin, the latter having the black skin removed.
4. There are several different Aconites used in TCM, Ayurveda and Tibetan Medicine. In TCM, Zhi Fu Zi, dealt with here, is most used. It is the strongest tonic. Zhi Chuan Wu is less tonic, but is hotter, and better for strong Wind-Cold-Damp pain.
5. The main difference in the use of Aconite is the application of it as an anti-inflammatory, anti-pyretic, febrifuge in Traditions other than TCM. Its other uses, for example Rheumatic and Arthritic disease and Nervous disorders is quite similar.
6. An old TCM addage states 'Aconitum Fu Zi is not hot without Ginger'. Ginger increases the Yang tonifying effect of Aconite while simultaneously reducing Toxicity. The same can be said of Cinnamon, which likewise enhances teh warming, Yang tonifying effect of Aconite while reducing toxicity.
7. The unprcessed Drug (which was sometimes used classically) is very dispersing, the processed root is tonifying. (Li Shi Zhen)
Main Combinations:
With Ginger makes its effect very Heating.
With fresh Ginger makes it more dispersing.
With Licorice to moderate and slow its effect.
With Cinnamon to lead Fire back to the Ming Men (in the lower abdomen)
With Ginseng to tonify Kidney Yang.

Cautions:
1. Extremely toxic in its unprepared state. Even the prepared drug is highly toxic in overdose. A number of deaths occur each year in China from Aconite poisoning.
2. Only the prepared root is used internally.
3. It is wise to begin with lesser doses, increasing as needed. Cooking time can also be longer to begin with (2 hours), reducing cooking time over a number of days.

ANTIDOTES:
NOTE: Overdose from Aconite is potentially lethal and therefore any overdose should be sent to hospital immediately.
1. Licorice (TCM)
2. Ginger, fresh and dried (TCM)
3. Cinnamon–infuse 5–10 grams of Cinnamon in hot water and drink, repeating if necessary.
4. Garlic
5. Asafetida
6. Anthora (Aconitum anthora) was regarded as a specific antidote to the toxic Aconites. Anthora is a non-toxic (less toxic) species of Aconite. Similarly, in Tibetan Medicine, non-toxic (less toxic) species of Aconite (A. heterophyllum etc.) are regarded as counterpoisons to the toxic Aconites.
7. Delphiniums are closely allied to the Aconites. D. denudatum has, similar to the above-mentioned Aconites, been regarded as an antidote to the toxic Aconites.
8. Ground Pine: "It is an especial thing for the Poison of the Aconites of all sorts". (Culpeper)
9. Herb True-Love: 'The leaves or berries thereof are effectual to expel Poison of all sorts, especially that of the Aconites'. (Culpeper)
10. Purified Borax is regarded as an antidote in Ayurveda. Recent research has shown it to be an effective antidote to both acute and sub-acute Aconite poisoning.
11. Compound Decoctions from TCM:
i. Fresh Ginger, Licorice, Mung Bean (Lu Dou), Black Soy bean (Hei Dou), Sophora Ku Shen; Coptis Huang Lian, Ginseng; Astragalus Huang Qi (dosage of each herb depends on symptoms)
ii. irregular Heartbeat: Sophora Ku Shen (20 grams), Licorice (10 grams).
iii. Cold extremities and very weak pulse, Ginseng, Licorice, dry Ginger

CYTOTOXIC:
–Diterpenoid Alkaloids from the Chinese Traditional Herbal “Fuzi” and Their Cytotoxic Activity
–Cytotoxicity of Aconitum alkaloid and its interaction with calf thymus DNA by multi-spectroscopic techniques