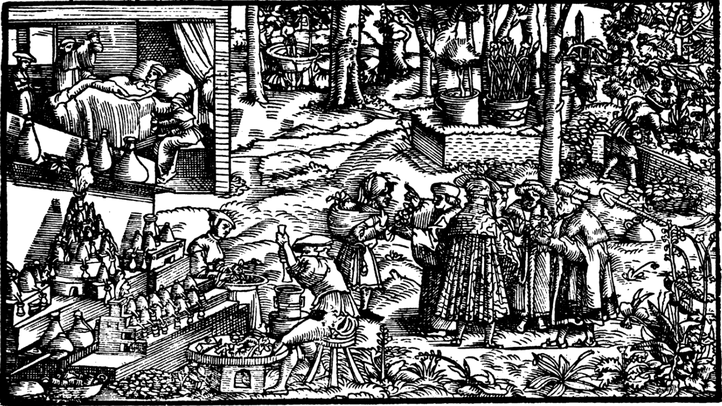 A Brief Overview of Traditional Medicine

The 4 Great Medical Traditions focused on in this Website are:
These systems are important in that they have all had direct or indirect influence upon one another and all have traditions going back up to several thousands of years and had a common link for well over 2000 years via the Silk Road. 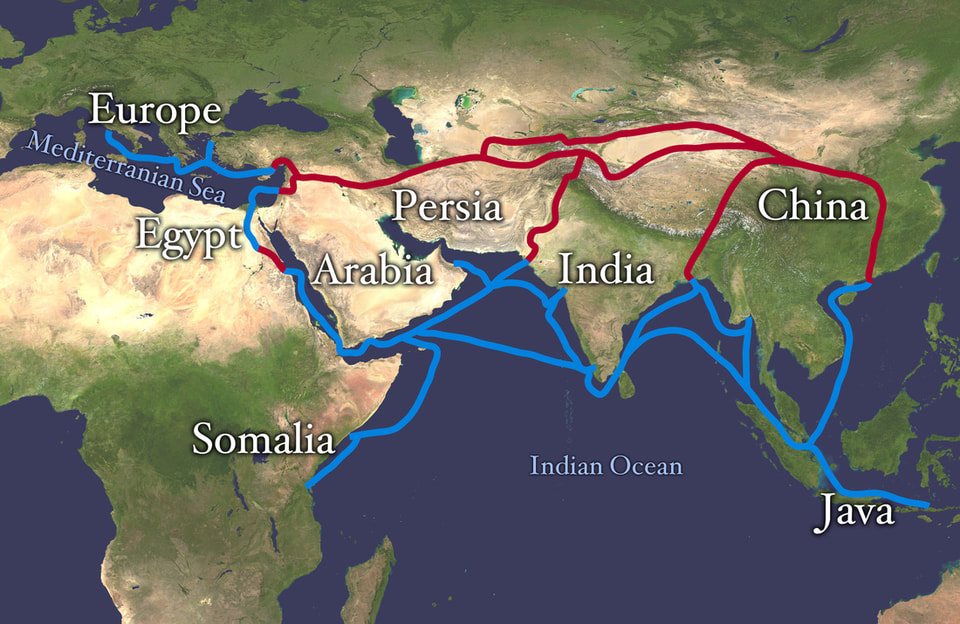 
The Silk Road is at the Heart of Traditional Medicine. As a direct trade route it has been in use for well over 2000 years. Indirectly, this route has existed far longer (with commodities and information being shared between neighboring cultures). The Ancient Egyptians used spices from the East, for example, indicating trade between east and west far older than 2000 years ago.

Although its name is derived from the Chinese Silk traders which used the route from the Han Dynasty (206 BCE – 220 CE), the cross pollination of ideas and the passage of knowledge was arguably far more important. It is obvious that theory and technology was passed along this route from a very early age.

Around 2000 years ago, water trade routes began to be used from Hanoi to India, and from the Red Sea to the west coast of India.

Many medicines, including Musk, Rhubarb and the Spices, were imported into Europe from China, Tibet and India. The herbal of Dioscorides, for example, already contains numerous Eastern medicines and Hippocrates (2400 years ago) likewise used medicines such as Cardamon, Cinnamon and Cloves from the Far East. Even the Ancient Egyptians had access to Cinnamon, Cloves and various other Eastern medicines.

The Silk Road was the connection between the various Cultures and their Medical Systems:

This shows the flow of interaction of the various medical systems over the past several 1000's of years.

As stated before, the ancient Greeks and Romans were already familiar with numerous medicines from the East. Likewise, Tibetan Medicine uses medicines such as Lapis Lazuli and Red Coral, the use of which was imported by the Arabs over 1000 years ago. The Chinese have also long used medicines introduced from the West including Myrrh, Frankincense, Dragon's Blood.

The Western Medical Tradition is commonly said to have originated with the Greeks. This is wrong. What the Greeks did, and Hippocrates in particular was to apply rationalism to an already ancient tradition. The Greeks obtained much of their knowledge of the Arts and Sciences from the Egyptians. This is clear when we look at the Greek God Hermes. He was identified as the Greek version of the Egyptian God Thoth, who was the Moon God, God of Wisdom and Knowledge, and the originator of the Arts of Medicine and Alchemy. The Western Alchemical Tradition, allied to the Ancient Medical Tradition, is known as the Hermetic Arts with at least part of this knowledge originating with the Ancient Egyptians.

The Western Tradition, via the Greeks, can then be seen to have roots in Ancient Egypt, but also in Mesopotamia and the ancient civilisations of Babylon and Assyria, possibly even back to Sumeria 6000 years ago.

The Western Tradition is vast in its scope, both in time, area, and civilisations which contributed to it. It has direct influence from Egyptian, Greek, Roman, European, Arab, Persian and Indian sources.

In addition, as the Europeans began to colonise remote lands, they brought back medicines with them that greatly increased the Materia Medica at their disposal.

The Eastern Traditions are based on ancient texts going back over 2000 years. In particular, the Vedic texts (the books of Sacred Knowledge) of India are said to have been revealed to seers of the Aryans in the second millennia BC and passed on by oral tradition. Modern scholars differ greatly on the exact age of the Vedic texts but they are definitely of ancient origin.

Likewise with the Chinese texts such as Huang Di Nei Jing (Yellow Emperor's Classic of Internal Medicine) and the  Shang Han Lun (Classic of Cold Disorders). These have been stated by some Chinese scholars to be well over 2000 years old, being derived from oral tradition. However, the earliest found texts are only around 2000 years old. The Yellow Emperor's Classic in particular is quite possibly information introduced from an already advanced culture.

Buddhism also had a major role to play in the spread of medical knowledge throughout the East. As Buddhism was introduced to Tibet, Nepal, Mongolia, China, Japan and elsewhere, so medical knowledge was also shared. The basic doctrine of Tibetan Medicine can be seen to be very close to Ayurveda of India and this also followed through to Nepal and Mongolia amongst other places. Likewise when Buddhism arrived in Japan from China, a great deal of the medical knowledge of China followed with it. So much so that the Medical Tradition of Japan relies heavily on Chinese Philosophy, Materia Medica and Formulas.


The 2 Most Interesting Systems

Perhaps the 2 most interesting medicine systems are Unani and Tibetan medicines. These intermediate systems had a wider scope of influence due to their geographical location. Arab and Persian physicians were strongly influenced by the ancient Greeks from around 900CE, but were equally influenced by Indian Medicine systems, as well as their own ancient Persian Traditions. This was a Golden Age of Unani, when texts were written that were studied for the next 1000 years, and some of the greatest formulas of Traditional Medicine were written, again to be copied and tranlated widely throughout the Western and Middle Eastern world.

Tibetan Medicine was well established before Buddhism arrived being closely allied with its traditional Bon religion. It was largely influenced by Indian Medicine which was introduced when Buddhism arrived. But before this Tibetan medicine had already been greatly influenced by other systems when in 685AD the King of Tibet invited medical scholars from Persia, Indian, China, Bhutan and elsewhere to share their knowledge. Around this time, Middle Eastern Physicians were employed as Court Physicians, and from this the influence of Arab physicians began. So Tibetan Medicine doctrine is now very closely based on Ayurveda, while the practice and formulas were influenced by Unani medicine. Even the use of Gem stones in Tibetan Medicine were probably introduced by the Arab physicians.

The other point of interest is that these 2 systems reached their peak much later than Greek, Indian and Chinese Medicine. The latter systems had their seminal texts written 2 or more thousand years ago, and these seminal texts are still the foundation of teaching and practice. But both Tibetan and Unani medicines peaked later. This is important as concepts, theories and clinical practice was much more advanced, more great thinkers had contributed to the teachings, and multiple systems had contributed to their advancement.


Proof of the Cross-pollination of Ideas and Medicine

There is lots of evidence of the early cross-pollination of theory and medicines between the systems. Some is well recorded, such as the importation of medicines along the Silk Road from early times, or the Arabs translating Greek texts in the 10th century, and the introduction of Ayurveda to Tibet with Buddhism. But there are many more subtle indications too. Many medicines are named from their translation from a foreign language. The Arabaic Zafran became Saffron; the Indian Bukuchi (Psoralea) became Bu Gu Zi in Chinese; Karpura (Ayurveda), Karpoor (Unani) and Ga Bur (Tibetan) and the English equivalent Camphor all share a common origin; there are many, many other examples of the names of medicines.

But to me, the most important proof of the cross pollination is in ideas; all share basic, fundamental concepts that are too wide and diverse not to have come from an original source, or to at least have been shared widely: the Elements of Nature; Humors of the Body; the concepts of Qi and Spirit; the Taste and Temperature of Medicines; the influence of the Planets on Medicine and Medicines; practices like Bloodletting, Cupping and Cauterising... all these and lots, lots more are far from coincidental. They are proof of a single ancient body of knowledge which has been adapted, enhanced and shared by different cultures since ancient times.

Thus, the purpose of this website (Integration of the various medical traditions) has already been in progress for thousands of years, with all medicine traditions devouring and incorporating Theory, Materia Medica, and treatment from other systems at any opportunity.

Now it is time for western practitioners of Traditional Medicine to follow this lead and move forward, blending ancient knowledge and reforming it into a practical model for modern use.