Hot or Cold? The Temperature of Medicines

By Adam Tate, 2010
The temperature of a medicine is one of the first energetic classifications used in all Traditional Medical systems. It can be found in Greek / Roman, Arabic, Indian, Tibetan, Mongolian, Chinese and Japanese Traditions, to name a few. It also goes back to antiquity, with the ancient Egyptians and Mesopotamians using this method of categorisation.

The Ancient Greeks established perhaps the most detailed categorisation of the temperature of medicines. This is because the heat of a medicine was divided into degrees between 1 and 4, 1 being the mildest, or slightly cool or warm, while 4 being the Coldest or Hottest. In addition, the qualities of Moist and Dry were added, also divided into degrees of 1–4. So a medicine may be Cool and Dry in the second degree, or Warm in the 1st degree and moist in the second, for example.

In most cases, the temperature of a medicine is manifestly present. A cool, moist, succulent medicine, such as Lettuce or Plantain, immediately shows itself to be cool and is recognised as such in all traditions. Then, upon tasting it, it is moist, cool natured, with a slight bitterness. In addition, if we take it internally in sufficient quantity, we may perceive a coolness of the body, and in cases where there is bodily heat, fever or inflammation, we may note a relief of those symptoms. Thus, it is a cold medicine.

Some medicines look warm. Spices tend to have rich, warm and vibrant colors, and if not, their aromatic, spicy, pungently uplifting aromas makes their nature known. Then, if we were to hold such a warming medicine in our mouth, a warming, pungent taste makes it nature definitive.

However, there are medicines which are less clear. Despite the fact that a large majority fit into a class of being fairly obvious, this small selection of medicines whose nature has been debated over and contradicted in systems, deserve some special attention.

TCM tends to view the Nett effect of a medicine: the end effect on the body when a medicine is taken. So a medicine that is bitter, has anti-bacterial and anti-inflammatory effects, would generally be classed as cool or cold.

The Western traditional tends to look just at the medicines as a whole. So a very bitter and aromatic medicine, like Rue or Gentian, is usually classed as Warm. There is a logic to this, inasmuch as a potently manifest nature is very Yang, and to have a strong smell and taste, we can expect the medicine to have a strong, stimulating and invigorating effect. So to call these Warm is understandable, if not a little strange to a TCM practitioner.

In the Western Tradition, a medicine can be classed as warm, yet still acknowledged for being useful to clear Bile, the heating humor of the body. Rarely does TCM regard a medicine as Warm, but effective to clear Heat.

Some medicines and in fact some things in nature show a manifest and obvious propensity for Heat or Cold. All traditions from all cultures will agree upon the coolness of Cucumber, Violet and Pearls. These medicines can even be said to be ‘archetypes’ of Coldness, their effects, nature and even appearance represent coolness, so much so that someone with no philosophical background could judge these things to be cooling.

Likewise Cayenne, Ginger and Arsenic are principally Heating. It is manifest in their colors, their taste, and their effects. Just looking at these medicines suggests their heating nature.

These types of ‘archetypal representatives’ can be called ‘True’ manifestations of their nature, hot or cold. There is no ambiguity and no arguments.

There are various medicines, however, that have greater or lesser levels of ambiguity about their actual nature. This is because of opposing or contradicting qualities or effects.

Dosage and administration form also have an effect. For example, TCM tends to use large doses in decoction form. If large doses of a very bitter medicine are given daily for a couple of weeks, people will tend to feel weak, cold and their digestion will eventually become disordered–all logical manifestations of a cold medicine.

However, when the same medicine is given in pills, powders, troches or electuaries, as in the western tradition, the dose will be much smaller.

In such cases, the bitter nature of these medicines works more as a stimulating, activating medicine, promoting digestion, stimulating appetite and promoting excretions. Given in small doses over a short period of time indeed acts like a tonic. Small doses of such medicines still has a profound effect, without being as draining.


Time and Place play a Part

Another aspect is of time and place, or indeed, person (that is, the person using or writing about the medicine).

Cold places, such as England, Northern Europe and Tibet focus on the use of Warm medicines. The general coldness of their environment means that they are prone to cold and wind diseases, and therefore tend to require warming medicines. In such places, a medicine that is mildly cool, but with warming aspects, may be judged as cold. However, the same medicine may be judged warming by the Arabs in a desert area.

If someone works on a battlefield as an army physician (as many great healers of the past have), they may judge a medicine which is beneficially applied to inflamed Wounds as Cool, whereas doctors in a hospital who find the same medicine effective to stimulate menstruation when obstructed may class it as Warming.

Ancients tended to have to deal with many infections, both epidemic, and due to wounds, injuries and childhood diseases. In such cases, any medicine they found to be effective in reducing the Fever and checking the infection may be classed as cooling. Later doctors treating very different conditions may see different effects from the same herb.


The Effect of Combinations

Thus with bitters. When bitters are combined with cold medicines, they work as cold medicines. They will effectively clear Heat and inflammation, and will manifest with effective antibacterial activity.

However, when a bitter medicine is combined with warm, aromatic and pungent medicines they are more stimulating. Western Pharmacy developed a class of medicines called Aromatic Bitters. These formulas combined Bitters and warming Aromatics together and were used to stimulate the digestion, especially taken before meals; these are the original apertifs.


All Herbs contain Heat and Cold (Yin and Yang)

One philosophical point that is worth noting is that all medicines contain both Heat and Cold, dry and Moist.

In fact, the Ancients said everything is composed of the 4 Elements, which between them contain all 4 Qualities: Hot, Cold, Dry and Moist. What gives a medicine its given qualities is a predominance of 2 of the Qualities, for example, Heat and Dryness in the case of Garlic. But it can be said that Garlic has some Cold and Moisture within it, just far less than its Heat and Dryness.

This then suggests that almost all medicines can be treated in such a way as to bring out opposing effects. So drying a green herb will reduce some of its moist quality, while heating (such as stir-frying) a medicine engenders its warmth. Carbonising Rhubarb reduces its cold and purgative nature and enhances its warm, drying, astringent nature.

The mode of preparation, form of administration, combination and dosage can all effect the inherent nature of a given medicine.


Bias of the Different Systems

TCM was heavily influenced by the Wen Re Bing (Warm-Febrile Disease) school, that is, the Heat disease School of thought. This arranged Heat diseases (Infections and Epidemics) into various grades and levels of penetration. From this, the use of cold formulas and cold medicines became very sophisticated.

The Western tradition had a great focus on warming and supporting the Innate Body Heat (Yang). Despite the fact that the western tradition included colder European countries, its development happened in the warmer Mediterranean regions. And yet, there was still a focus on warming medicines. Not that they didn’t use cold medicines, but there was certainly a bias on the use of Warming medicines. In fact, the most potent Cold formulas were introduced by Arab physicians around 1000CE. This includes Troches of Spodium (Tabasheer) and Troches of Camphor, for example.

Thus, the different systems tend to have different biases which affect the way they view their Materia Medica.

Some authors found the best way to work with the conundrum of the temperature of a medicine was to class some medicines as both warm and cold.

For example, Unani texts often class Fumitory as having a dual nature, both Warm and Cold. Holmes in his 'Energetics of Western Herbs' likewise talks of some medicines being both Hot and Cold.

This can be an easy solution to explain the dilemmas that come from seemingly opposing effects.


Some Medicines that have opposing views: 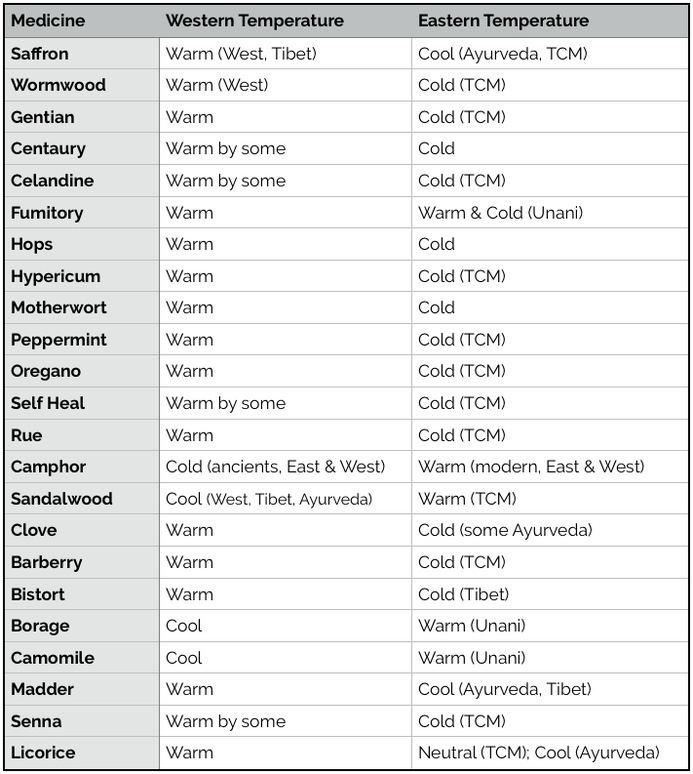 * Note than within any given system, some of the above medicines may be classed differently by some sources, the above examples given to illustrate differences.


Other medicines which have been claimed to be Hot and Cold

A classic example is Camphor. Classically regarded as Cold, it has been recognised by modern authors as very Warm. This is seen in both west and east, where in ancient times it was regularly regarded as Cold. Salmon said ‘the old say Cold and dry; the new say Hot’. The coldness is manifested in its cooling effect on the tongue when tasted, and on the skin when applied. Even the smell is ‘cool’. However, in modern times its incredibly potent and penetrating nature, it lightness and volatility all point to a very warm nature. Thus, it truly manifests both Hot and Cold natures. Ancient formulas often used Camphor for Fevers, including High Fever, and in these cases it was combined with notably cold medicines such as Rose, Cold Seeds and Tabasheer. Later formulas tend to focus on its warming, opening, uplifting and stimulating nature.

Asparagus has been classed as both Hot and Cold by differing sources, yet all agree on its moisture, as it is an accepted Yin tonic.

Self Heal was often classed as Warm in Europe, but is regarded as very Cold in TCM. The ‘Canon of the Materia Medica’, a TCM classic says the drug is Hot in taste, but Cold in nature.

These are some of the conflicting energetics of some traditional medicines.

﻿﻿In a majority of cases, the manifest temperature of a medicine is obvious. In a small number of examples the classification is ambiguous.

Generally, in the cases where temperature is not clearly defined, it is often not very important. For example, a strongly astringent medicine may be classified as being hot and cold by different authors. However, regardless of its temperature, it will be used to restrain leakages, and when associated with heat-type leakages it will be combined with cold medicines and vice versa. The energetic effect of the medicine will be defined in formula, for example, when it requires a warming effect, it is combined with warming medicines.

The doctrine of Heat and Cold is useful and important, and is a fundamental principle of Traditional Medicine. But, just as in pathology, some manifestations of diseases are not clearly heat or cold dominated. And in those cases, Heat and Cold are not so important.