As with other Traditions, Tibetan Medicine has a number of standard combinations regularly used in their formulas. While some of these are derived from Ayurveda, such as Triphala (Myrobalans) and Trikatu (Three Pungents), others are unique to Tibetan Medicine.


Six Excellent Drugs
One Tibetan group of herbs of particular interest is the Six Excellent Drugs. This combination is composed of one medicine for each of the 5 Main Organs (5 Yin Organs of TCM), Heart, Lungs, Liver, Spleen and Kidney, as well as the 'Life Channel' (Du Mai of TCM), the primary channel for Yang Qi. In addition each of the Dosas (Humors–Phlegm, Bile and Wind) are affected by 2 medicines. It is regarded as fairly Neutral in nature. For these reasons, it is commonly added to large formulas for complex diseases. When combined with Triphala, which also balances and regulates the Dosas (Humors), it becomes a powerful compound for regulating the Humors and balancing the Organs. 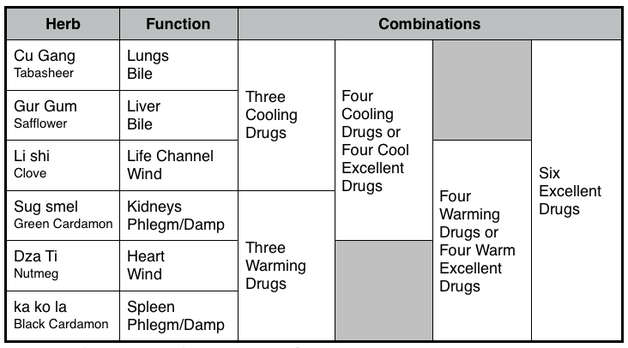 Within this group of Six Drugs are several other groups, as demonstrated in the table above. Three and Four Warming and Cooling Drugs, used for Cold and Heat diseases respectively.


Pomegranate 4
There are a number of variations of Pomegranate Four, all having similar effects, but slightly different emphasis. They warm and strengthen the Stomach, promote Digestion and enhance the formation of Chyle suitable to make good blood and Humors (1st Digestion). When Safflower is added, it enhances the effect in the Liver of producing good Blood from the Chyle (2nd Digestion).


Pomegranate Sanctuary
This is the same as Pomegranate 5, but substitutes Safflower for Galangal. It is a stand-alone formula but may also be found as a component of larger formulas. The warming spices and Pomegranate help the Stomach produce good Chyle (1st Digestion). When Safflower is added it aids the Liver in producing good blood from the Chyle (2nd Digestion). It is also used for obstruction of the channels.