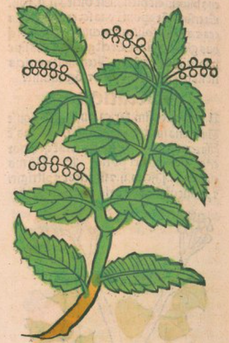 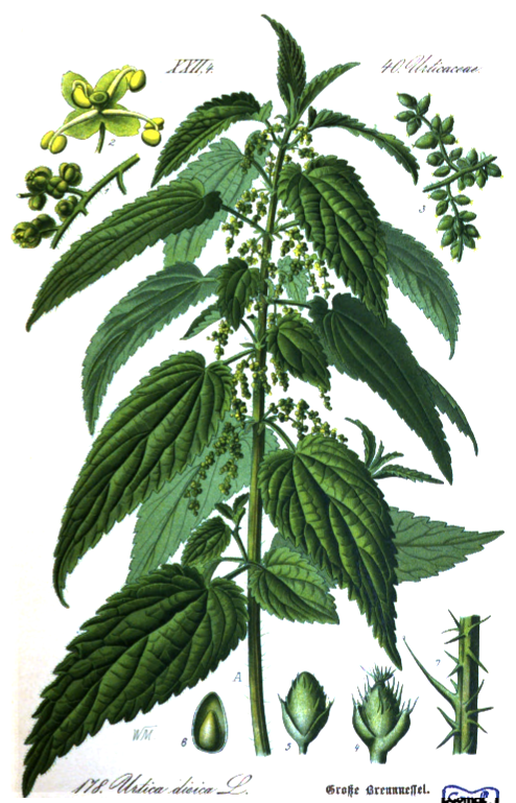 Flora von Deutschland, Kohler, 1886
Botanical name:
Urtica dioica
Related species are used including Roman Nettle, U. pilulifera.
Greater, Lesser, Roman and Dead Nettles (Lamium) were recognised in Western texts.
In TCM, a number of Urtica species have been used although mostly in Folk Medicine. These include:
1. U. angustifolia
2. U. cannabina
3. U. lobata
4. U. urens
5. U. utillis
6. U. laetevirens
In Tibetan Medicine, U. tibetica (Za phyi a ya) and U. triangularis (Za rgod)

2. Clears Damp and Phlegm:
-Nettle tops were traditionally eaten in Spring to clean out the cold, moist and phlegmatic excesses left after Winter.
-lymphatic congestion and swellings including Scrofula.
-Hypertension related to obesity and for Renal Hypertension.
-excessive watery Diarrhea.

3. Opens the Lungs, Clears Phlegm, Stops Wheezing:
-Shortness of Breath, Wheezing and Asthma (juice can be taken with Honey or the leaves are burnt and the smoke inhaled);
-boiled with Barley cream to bring up thick phlegm from the chest;
-Pleurisy, and swelling of the Throat.
-Tuberculosis, especially in the early stages.
-Allergies and Hay Fever.

4. Benefits Liver, Blood and Uterus, Promotes Menstruation:
-promotes menstruation, and settle the ‘suffocation and strangling of the Womb’. (decocted in wine to promote menstruation)
-Taken during pregnancy to strengthen the Fetus, aid the Kidneys, ease Leg cramps as well as promoting an easy delivery, easing pain and preventing hemorrhage.
-traditionally for Blood Deficiency, Anemia, and to nourish the Womb to promote Fertility.

6. Promotes Circulation: (West, Tibet)
-traditionally used to promote eruption of Rashes such as Measles and Small Pox (Salmon);
-disorders of the Heart and Circulation.
-promotes circulation by clearing Phlegm and Damp, and promoting Blood flow.
-local species in Tibetan Medicine for Heart disease

8. Externally:
-fresh plant used externally in the form of its sting is the strongest, safe method of causing stimulation of blood supply to an area; applied to muscular aches and pains.Schroder said ‘Chirurgions rub a part that wants nourishment with Nettles, to attract the Blood’.
-juice or decoction is used for Polyps, Old and Stinking Sores, Fistulas, Corroding Scabs, Gangrenes, Scabs, Itch etc. in any part of the body.
-used for the Nettle Rash itself (infusion of the young leaves being taken, or the Oil or juice applied).
-applied to Green Wounds, Dislocated Joints, Aches and Gouts. The ointment or wash is good for cold, numb Joints.
-The infusion or tincture (diluted with equal parts of water) is a good application to Burns.
-used internally and externally for stubborn Eczema, poor conditioned Ulcers, both internal and external.
-for Edematous Swellings, Edema, Swelling of the Legs (wash or bath)
-wash of Nettles is a good wash for preventing Hair Loss, to promote Hair Growth and remove Dandruff; Kneipp boiled the plant in Vinegar and Water as a very useful Hair Wash; but to stimulate Hair Growth, the scalp is rubbed with Nettle juice; a tea of the leaf was used and to clear Dandruff.
-gargled for sores and inflammations of the Mouth and Throat
-ash mixed with vinegar is applied to swollen glands, thyroid swellings and tumors (Unani)

3. Resists Poison:
-the seed is a counter-poison to Venomous creatures, Hemlock, Henbane, Nightshade, Mandrake, Mushrooms and Mercury as well as Snakes, Scorpions and Mad Dog bites
-Seed has been taken for Fever (usually in wine).


ROOT: in general, used the same as the herb.
1. Strengthens the Kidneys, Clears Damp, Promotes Urine:
-specifically used for Prostatitis, Prostate Adenoma, and Prostatic Hyperplasia.
-It is more strengthening than the herb so is better in chronic Kidney conditions, and for the elderly.

1. Extract of Nettle.
i. take Leaves and Stalks of Nettle, Bruise them in a stone mortar, then express the juice, and evaporate to the consistence of an Extract.

2. Syrup of Nettle:
i. Juice of Nettle, depurated by boiling, then strained, White Sugar (equal parts). Boil slowly to the consistency of syrup.
Copyright © 2015–2020