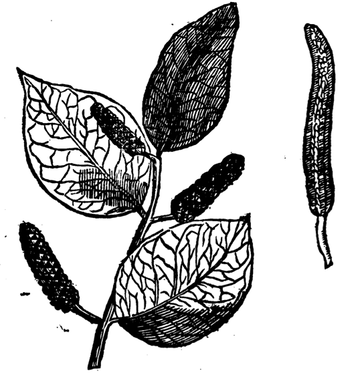 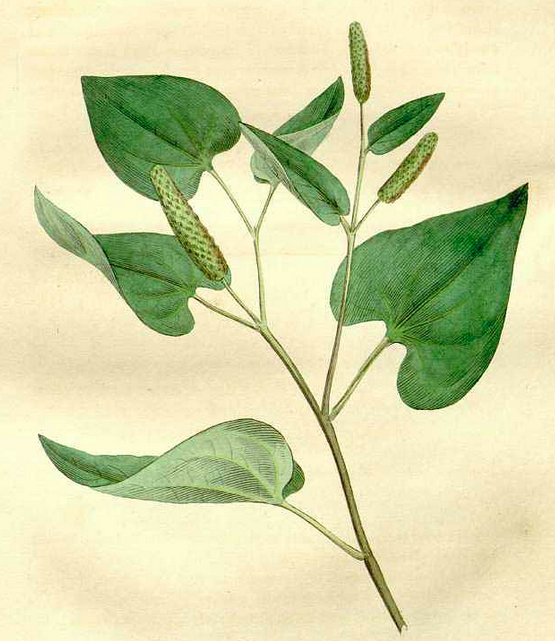 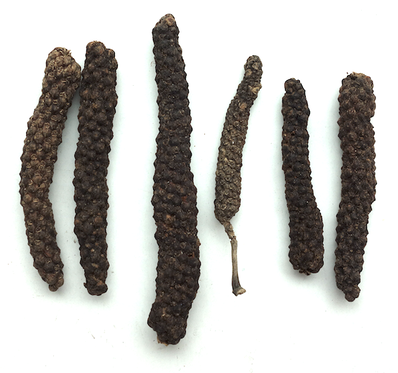 Parts used:
Mature ripe fruit
The root of Long Pepper is also used in Ayurveda. It has similar effects but is considered  more heating.

3. Clears Cold Phlegm (TCM, West, Ayurveda, Tibetan):
-cold phlegm of the Lungs, Stomach, or Bowels
-Cold Cough
-Long Pepper is used in Ayurveda for Asthma and Bronchitis, especially in Children (with Jaggery or Milk or Honey)

4: Stops Wind, Eases Pain, Clears Cold and Damp:
-pacifies Vata/Wind in Ayurveda, and is said to help downward movement of Qi within the body;
-Headaches, Toothache, and Arthritis from Wind, Cold, and Damp;
-Sinusitis

5. Rasayana (tonic to the 7 Body Tissues):
-Ayurveda considers Long Pepper to be Rasayana, beneficial for Longevity, and a promoter of Intellect.
-Neurasthenia, Amnesia
-strengthening, and it is given for Diabetes and Tuberculosis. (Taken with Honey, or Honey and Ghee)

7. Externally:
-can be used as Black Pepper

NOTE:
1. Black, White and Long Pepper are used similarly. White Pepper is regarded as hottest but is least used. Black Pepper is better for the Stomach and Upper Body, while the Long Pepper is better for the Spleen and Kidneys and is regarded as more tonifying and strengthening. Clinically, either Black and Long Peppers, or all three Peppers, are used together.
2. Root of Long Pepper is used occasionally in Ayurveda and Unani. It has anti-fertility effects. It is often combined with Long Pepper fruit or Trikatu, for example in Powder of China root. It is also regarded as more strengthening so is used in tonic formulas, often with Withania, as in Balivivan.
Main Combinations:
Trikatu:
This is a mix of equal parts of Black Pepper, Long Pepper, and Ginger. It is both a stand-alone formula, and an important component of larger compounds. It warms the Stomach, increases Digestion, resolves Damp, Cold-Phlegm and Ama (toxic residue of undigested food). Used alone for Indigestion, Hyperacidity, Cold and Flu, Cough, Bronchitis and Asthma. It is regarded as useful in Obesity and Diabetes. It enhances bio-availability, meaning it increases effectiveness of other medicines it is combined with.

Cautions:
1. Full doses are not suitable for use in Heat conditions or Yin deficiency.
2. Generally not used in Diabetes, Tuberculosis, Lupus Erythematosus, and Menopausal syndrome