by Adam Tate
Vertigo is traditionally classed as a Wind disease in Traditional Medicine. It is viewed as being related to abnormal activity of Qi which disorders the Brain and Nervous system to produce a feeling a giddiness or loss of balance. Wind (or erratic flow of Qi) can come with Heat, or Cold and Phlegm.

Vertigo can be very difficult to treat and Modern Medicine is often not effective. Therefore, it is worthwhile to study some of the Traditional formulas used in the treatment of Vertigo.

Primary medicines used are medicines that settle Wind or regulate Qi: Calamus, Nutmeg, Peony and Mistletoe are often used. Seeds of the Apiaceae, such as Coriander, Fennel and Aniseed are also used.

Other medicines used include Coral, Pearl and Amber. These medicines settle the Mind and Nerves, calm the Spirit, and are effective in settling Wind. In obstinate cases, Cinnabar was viewed as a Specific by various Western authors.


Sample Formulas used in the Treatment of Vertigo
The first is out of Gabelhover (1599) and combines the famous pair of Peony and Mistletoe, so often combined in the Western Tradition for Wind diseases including Epilepsy, Dizziness and Vertigo. This combination settles Wind but has a strengthening nature and is therefore indicated in cases with deficiency, chronic cases, and Vertigo in the aged. Here, Peony seed is used but the root could be substituted.

The next is called Electuary for the Head and is from Lewis. It combines Mistletoe with Valerian and is very good to settle Wind when combined with Damp or Phlegm.

This next is called Pills for Vertigo and is an Ayurvedic formula. It uses Chebulic Myrobalan to regulate Qi, the other herbs being warming, and therefore indicating this formula is intended for cases caused by Cold and Damp.

The following is out of Wirtzung (1598) and is called Powder of Juniper for Vertigo. It is a simple combination of 3 medicines, however is elegant in design. Juniper warms, clear Cold and Damp, and is also used against Wind diseases. Betony has been highly regarded for various diseases of the Brain since ancient times. Centaury is bitter and clears Liver Heat. This, therefore has a muli-faceted action, despite being composed of just three medicines.

The next is from Gabelhover, 1599 and is called Sugar for Vertigo. It is primarily composed of seeds of the Apiaceae along with Calamus and Marjoram. It is likewise intended for cases caused by Cold and Damp or Phlegm.

The following is from the Western Tradition and is called Powder of Nutmeg for Vertigo. It is based on Nutmeg which is also the base of a number of Eastern formula for Wind diseases. It also includes the famous pairing of Peony with Mistletoe, a staple in the treatment of Wind diseases in the Western Tradition. Galangal and Calamus open the orifices of the Brain and regulate the Qi and the Brain while relieving Phlegm and Damp. Betony is also considered a specific in various disorders of the Brain. 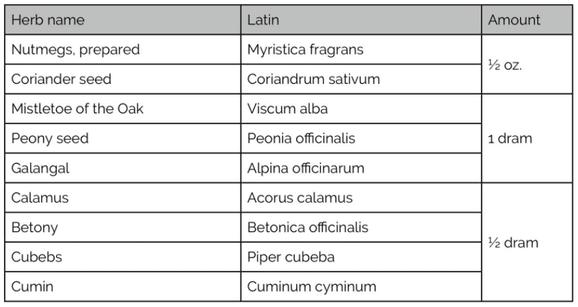 The next is taken from Gabelhover, 1599. It is effectively an expanded version of the preceding. 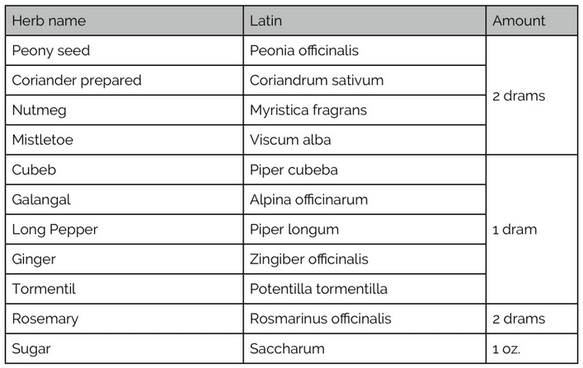 The following is called Tincture for Vertigo, and is taken from Antidotarium medico chymicum reformatum (1620). It contains a number of medicines to move Qi, clear Cold and Phlegm, and regulate Qi. 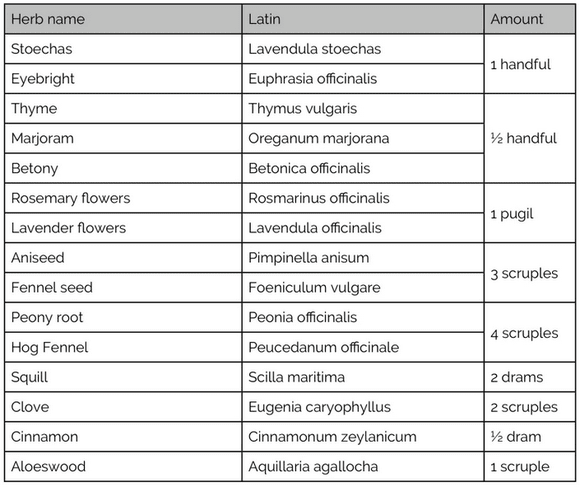 This next formula is the only official formula we will look at here. It is from The Royal Pharmacopoeia [of France], Moses Charras (1678) and is called Cephalic Decoction. It combines a number of medicines used in the previous formulas and is based on Valerian, Peony, Mistletoe, Orris and Calamus. These medicines strengthen the Brain and Nerves, settles Wind, clear Damp and open the Orifices of the Brain. It is an elegant formula which could be modified and used in powder or tincture form. 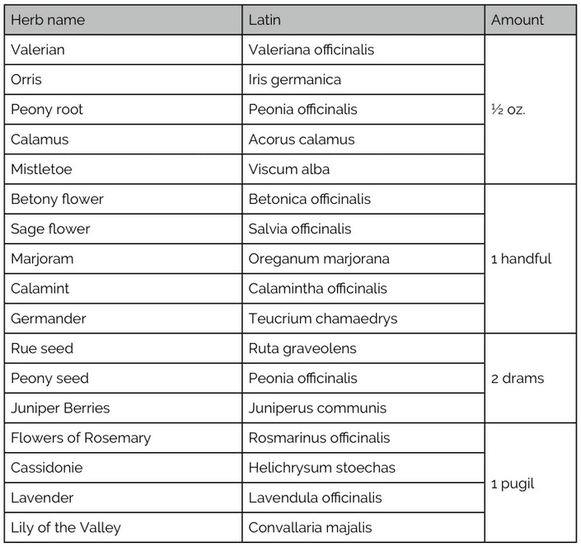 The next is the first of the formulas to use mineral medicines. It is called 'Electuary of Great Virtue for Vertigo' from Hartman, 1682. It uses flower, root and seed of Peony, mixed with Pearl, Coral and Amber. A number of authors had similar versions and a number extolled the virtues of this combination. Peony root can be used in place of the seeds and flowers, but in this case, the Western Peony is to be preferred.

An Interesting Case
Years ago I had an elderly man come to see me. He was in his mid 70's, of Greek origin, and was a self-made wealthy man with an old-world work ethic and strength of character. He actually came for back pain but during our first consultation he said 'you can't do anything for Vertigo can you?'. He had been plagued with Vertigo for over 30 years and had tried various western medicines over that time without relief and in some cases 'side effects worse than the Vertigo'. He had also been to various other practitioners including Naturopaths. He just learned to live with it and had days where he couldn't work or drive.

Although he was elderly, he had a strong character and still worked physically every day. His pulse was big and moderate, as is typical for a healthy gentleman of his age, his tongue large and strong, but with a noticeably thick, dirty, yellow coating.

From the Humoral perspective, his tongue indicated the need of purging. The thick yellow coating indicated stagnation of Bile and Phlegm. I had recently made my first batch of Stomach Pills (composed of Aloe, Rose and Mastic), and knew they were used traditionally to 'purge the Head', and indeed, had been used for Vertigo. I decided to give him 7 pills, one for each day over the next week, and once purged, I would use another formula to directly treat the Vertigo.

When I saw him a week later, the first thing he said was 'Now, what can you do for this shoulder, I've had a problem with it for years.' I asked how his Vertigo was and he replied 'Oh, you've cured that. It was better after the third day'. He commented on the foul 'stuff' that had come out of his body. On follow-up over several years, his Vertigo remained absent.

Sometimes, the judicious use of purging medicines achieves more in a few days than months of other medicines.