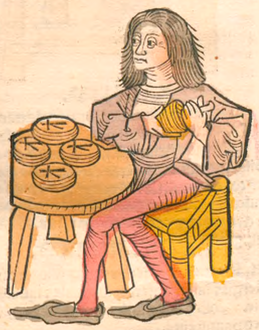 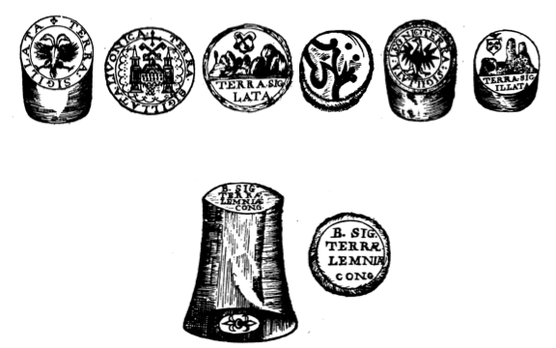 A number of types of Sealed Earth. The right illustration is specifically Terra Sigillata prepared from Lemnian Earth and includes Arab and Turkish types in the top 2 rows, Florentine in the 3rd row, Bohemian in the 4th, Silesia (Central Europe) in the 5th, and Laubacenses in the bottom row. (Museum Museorum, Valentini, 1704) 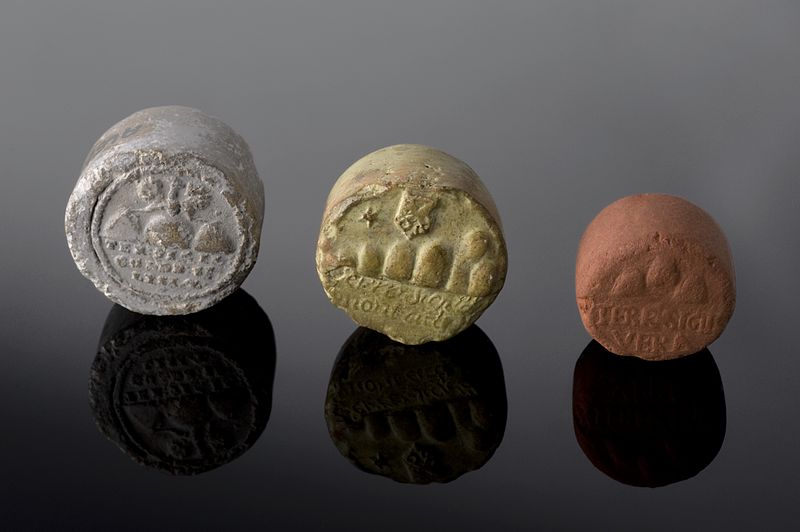 Parts used:
Sealed Earth was prepared of Earths from various locations, apparently sometimes from White Earth and sometimes from Red Earth, pressed into the form of round discs. That of Lemnos was prepared by mixing with Goats Blood. Thus, white Lemnian Earth may have been used but appeared red due to the blood. Versions were prepared from Lemnia, Samia, Melia, Silesia, Germany, Turkey, and elsewhere, with that of Constantinople often regarded as best.
Earth of Lemnos and Sealed Earth are used very similarly; Sealed Earth was generally regarded as stronger against Poison.

PREPARATION:
As can be seen from the above photos and illustrations, there were many varieties of Terra Sigillata. Some said the cleansed Earth was mixed with Goat Blood and formed into round discs. Evidently some were not mixed with Blood as the color remained whitish or yellowish as the Earth they were prepared from.
Main Combinations:
Combinations are similar to the other Earths, which see.

Cautions:
Not used in constipation