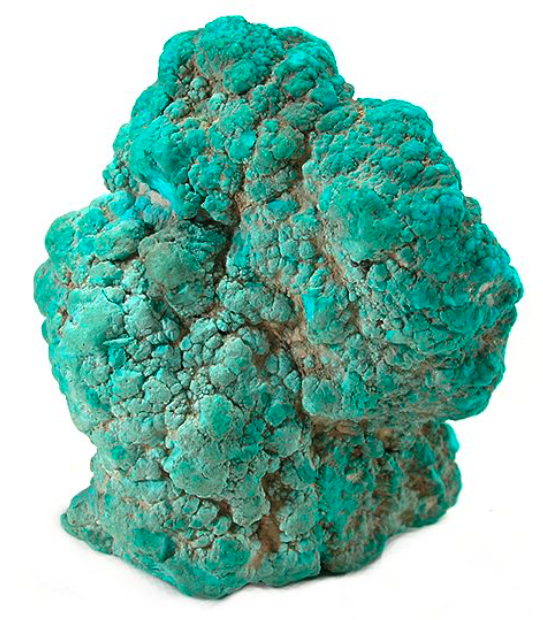 Parts used:
Finely levigated stone
Salmon said 'it is of a dark sky-colored, green, or greenish-blue and said they are either Oriental or Occidental:The oriental are to be preferred, the Occidental being more Green or white in color.
Some said the best was the color of Verdigris.
In Tibet, 'Old' Turquoise is preferred in medicine. That is Turquoise which has been mined in the past as opposed to recently mined Tuquoise. The old stone is a deeper green color.
Today, the US is also a primary source of quality Turquoise.

3. Strengthens the Eyesight: (West, Ayurveda)
-strengthens the sight, poor or failing sight
-like Emerald, the beautiful color was said to please the Eyes
-Egyptians reportedly applied Turquoise for Cataracts

COMMENT:
1. It was long believed to grow pale and lose its color if the wearer grew sick or had a fever. Conversely, when the owner became healthy again, the stone would again return to its fine color. Salmon (Seplasium) relays the story witnessed by another, that upon the death of the wearer, a beautiful Turquoise became dull and colorless, and was sold off cheaply. After being sold, it returned to its fine color again. This is identical to what the Tibetans say regarding Turquoise color and the health of the wearer.
2. Some claimed that during the day, the color should be like a fine sky blue, but at night time, it became greenish colored.
3. In Tibet, Turquoise is regarded as a superior gem, second only to diamond.
4. The lost color of a Turquoise stone was said to be revived by being rubbed with Oil of Vitriol.

PREPARATION:
1. Levigated Turquoise:
It can be levigated (finely powdered) with Rose (or other) water until fine enough not to be felt between the fingers when rubbed.
2. Prepared Turquoise (Tibetan):
Turquoise is boiled with Chebulic Myrobalan, Dryopteris root (Re ral) and Saltpeter for 4 hours. The water and herbs are disgarded and the Turquoise is washed well. After processing the color of the Turquoise is much lighter.
3. Bhasma of Turquoise:
It can also be prepared as Bhasma in the same way as Lapis Lazuli.

Main Preparations used:
Levigated Powder (Pishti), Bhasma
Research
1. Cupric Oxide (which accounts for almost 10% of the weight of Turquoise) has been used medicinally for Worms (Tape), and as a Resolvent; used (mostly externally in ointments) for chronic indurated glands, varicose ulcers, arthritis, myalgia etc. (Merc Index) It was used in doses of 50-100mg., meaning that a dose of 500mg-1 gram of Turquoise would supply a medicinal dose of Cupric Oxide. Its use as a resolvent may be related to its reported effects against Liver Tumours in Tibetan Medicine. The Bhasma of Copper (similar to the Oxide) has likewise been established as a Hepatoprotective, and has long been used for Chronic Liver disease in Ayurveda.
© MedicineTradition 2015–2021