A TCM patent remedy for Headache
by Adam Tate, 2019 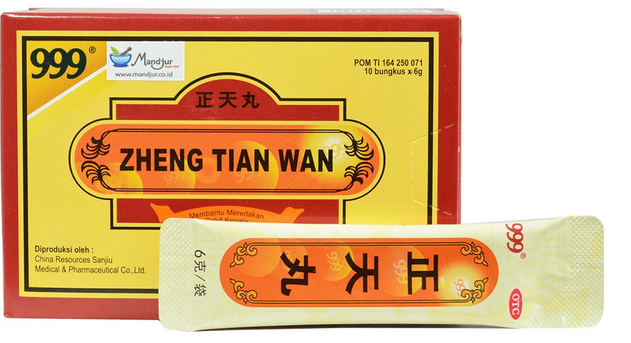 Zheng Tian Wan is a TCM patent medicine for Headache. It is an OTC (over-the-counter) medicine available from various manufacturers as a general first-line remedy for Headaches and Migraine.

Some patent medicines develop a reputation for being effective for a particular disease without necessary differential diagnosis. They may achieve a high rate of efficacy regardless of the diagnosis, in some cases equal to or better than a formula written by a TCM doctor. These are Empiric remedies which often are the origin of a patent medicine.

Despite the fact that it is available as an OTC medicine it contains prepared Aconite Zhi Fu Zi and Asarum Xi Xin, both accounted toxic and forbidden in western use.

There is a great variation in the formula used by different manufacturers, and some companies have made versions marketed at the west which do not contain the above-mentioned toxic herbs.

As per general Chinese convention with patent medicines, the doses or proportions are generally not given.

Following is 4 different varieties available from different manufacturers under the name Zheng Tian Wan, the first being another version from 999:

Gastodia Tian Ma is not included in all versions, but is a potent addition to settle Wind


Formula analysis
The basis of this formula is Four Substance Decoction (Si Wu Tang), which is composed of herbs 1–4 being the primary Blood-tonic and circulation regulating formula of TCM. Ligusticum Chuan Xiong in particular is regarded very highly for various types of Headache. It is closely related to the western Lovage root which is used similarly.

Then there are the herbs that move the Blood and clear Blood stasis. This includes Ligusticum Chuan Xiong, Carthamus Hong Hua, Asarum Xi Xin and Prunus Tao Ren. This group regulates circulation and clears stasis, as well as helping relieve pain.

Finally, there are special medicines to penetrate and open the channels to clear obstruction. Of course many of the herbs already mentioned help achieve this, but in particular, Carthamus Hong Hua, Asarum Xi Xin, and Prepared Aconite Bai Fu Pian (Zhi Fu Zi) potently achieve this, especially in combination.

Aconite in particular is perhaps the most essential herb of the formula. It potently regulates Qi to stop Wind, warms the Yang to promote circulation and clear Cold and Damp, is analgesic and regulates the blood circulation.


Dose
It is available either as Pills, Tablets, or as small bags of tiny pills, each bag containing 6 grams which is taken as a dose. However, due to variation in formula and strengths, individual manufacturers directions should be followed.

This can be taken 2 or 3 rimes daily for 2 or 3 weeks, then a break in treatment will often be found beneficial. Chronic cases may need to take continuously for 4–6 weeks.

Contraindications
This is generally safe and well tolerated when used as prescribed. However, it is not suitable for use during Pregnancy, in the very Young or very Old. In addition, its use should be avoided in those with serious Heart, Kidney or Liver disease.

If using a patent form of the medicine, especially from China, it should be ascertained if Aconite is included or not. If it is, ensuring the patient is aware to avoid overdose, and perhaps starting for a few days on half doses would be sensible measures to take. Ensuring the product is kept out of reach of children is also important.


The Use of Aconite
Aconite is an incredibly important and potent medicine used in the Eastern systems. It is most used in TCM and Tibetan Medicine although its use in these systems in quite different. Aconite is primarily used in TCM 1. as a potent Yang Tonic; 2. for Wind-Cold-Damp arthritic and rheumatic complaints.

In Tibetan Medicine its use in more diverse and it is especially used in various Wind diseases. Aconite has a potent effect of settling wind and regulating Qi circulation, as well as relieving pain and inflammation.

One interesting formula related to its use in chronic and obstinate Headache and Migraine is the Tibetan Pill, Red Coral 25, a compound medicines with 25 ingredients including mineral medicines such as Red Coral and Lapis Lazuli. This is one of the famous Rin Chen, or 'Precious Jewel Pills' of Tibetan Medicine. It also contains Aconite and this has been credited as being one of the primary effective medicines of the formula. (Click here to read more about Red Coral 25)


Warning on the use of Aconite
A few years ago this formula became well publicised in the West due to its Aconite content. The UK MHRA (medicine regulation board in the UK) released a statement claiming the medicine could be dangerous, stating that anyone who has taken it should cease immediately and contact their doctor or health practitioner.

In this media release they stated that 3 cases of suspected Aconite poisoning had come to their attention. One suffering Kidney problems, one with dizziness and paraesthesia, and a third with palpitations and shortness of breath (who recovered after ceasing). It does not state these cases were associated with taking Zheng Tian Wan, just after taking Aconite which was most likely after it was prescribed by a practitioner to use in decoction.

The media noted Aconite is known as the 'Queen of Poisons', but neither mentions the elaborate processing that the Aconite goes through in the Eastern systems, nor compares the percentage of side effects connected to the use of Western Medicine for similar diseases.

However, it is true that Aconite is related to most of the serious side effects and fatalities that occur in modern TCM in China. But this is in Decoction where the dose maybe 10–20 or more grams per day (sometimes far higher), and also using Wild forms of Aconite which are known to be far more potent that the cultivated forms. In Pill form where the amount is only a fraction of the formula, no side effects would be expected when used in therapeutic doses.

It does remind us to be aware of the use of such formulas and patent remedies. Some people can think that 'herbs are not as strong as western pharmaceuticals, I therefore should take more than directed'.

If recreated for the western clinic, the Aconite can be omitted.


Research
Details of available research are sketchy and only available in Chinese. However, according to some clinical trials, there has been up to 98% efficacy (efficacy meaning some relief, not necessarily a cure). There is plenty of anecdotal reports of it being very effective in some patients.

A proposed version for the Western Clinic

Powder or form honey Pills.
Dose of the powder: half–1 teaspoonful, 2–3 times daily.
Feverfew (Tanacetum parthenium) is an obvious addition in the Western clinic as it is cheap, readily available, and has a lot of research to show its effectiveness in various types of Headache including Migraine.
Mistletoe and Peony were always combined in the Western tradition for Wind diseases of the Head. This combination settles Wind, regulates Blood as well as being nourishing to Yin and Blood. Along with Gastrodia, this combination powerfully settles internal Wind.

Additions
1. If permitted, 10 grams of prepared Aconite Bai Fu Pian (Zhi Fu Zi) can be added. If Aconite is added, an equal dose of Licorice should be added to counteract any potential toxicity.
2. If there is Blood deficiency, double the doses of Dang Gui and Paeonia Bai Shao and add Rehmannia Shu Di.
3. For acute Headache, double the dose of Fang Feng and add Angelica Bai Zhi.
4. Chronic Blood-stagnation type Headache with fixed pain, add Persica Tao Ren, increase the doses of Dang Gui and Ligusticum Chuan Xiong to 30 grams, and the dose of Asarum Xi Xin can be increase to 15 grams.
5. If there is excess Heat with stress, anxiety and insomnia, Red Coral and Pearl may be added.
6. To make it more penetrating to open up the network channels and open the orifices of the Brain, a little Borneol Bing Pian can be added.
7. Headache associated with Depression, St. Johns and Balm wort can be added.
8. This will be much stronger if 3–5 grams of Saffron is used in place of Safflower.

This formula is also well suited to being made into a tincture which will be absorbed more quickly and enter the blood vessel more effectively. The Tincture can then be applied on a cotton ball or gauze and applied topically to the pain as well as being taken internally.


Conclusion
Each Traditional Medicine system has numerous empirical formulas for the treatment of specific conditions, often being formulas that have proven their efficacy over generations. These are often quite different from formulas used by practitioners which are based on differential diagnosis. However, there is no reason why they cannot be incorporated into the modern clinic. These formulas can also serve as a basis for inspiration in the creation of individual formulas.