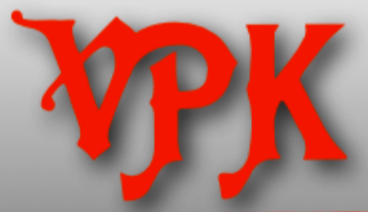 A useful way of Understanding Materia Medica
By Adam Tate, 2014

In Ayurveda, there are three primary Humors (Dosas): Vata (Wind), Pitta (Bile) and Kapha (Phlegm). These three energies are found throughout the body in a delicate interplay that is responsible for life and growth. When disordered, they also cause disease. Thus, Ayurveda is a Humoral system of medicine.

The qualities of the Dosas are:

Vata is the activator and moving energy, analogous to Air or Qi. It controls and is responsible for all activity from a cellular level to the passage of food through the digestive system and the movement when we walk.

In Ayurveda, it is common to give each medicine a ‘VPK rating’, which represents both the nature of that medicine, as well as inferring what that medicine will be useful to treat. For example, Garlic can be said to be P+VK–. This means it will increase Pitta (because of its heat and dryness), but will reduce Vata and Kapha. Thus, taking into account its pungent taste, straight away it can be expected that Garlic will be good for Coldness, Phlegm, Damp and Water with disorders including Cold Stomach disorders, Asthma, congestion of the Heart, Edema, Arthritic disorders etc.

Every medicine can be demonstrated to have such a quality, and by nature of one factor, that automatically effects its opposite. For example, the Heat of Garlic will eliminate Phlegm, but due to the same reason (its Heat), it will also increase Bile.

Some medicines are said to be VPK=, meaning they tend to balance, and may only effect the body in an unbalanced way if a large dose is taken, like Licorice, which tends to be balanced, but aggravates Phlegm in excess.

How does this fit with TCM?

The classifications of Chinese Herbs can be seen to readily fit this method of categorisation. For example, medicines which clear Damp-Heat would be classified as PK–V+. That is, they reduce Bile (Pitta) and Phlegm (Kapha), but will aggravate Wind (Vata).

The following Table shows some basic groups from TCM, classified according to the Ayurvedic method. Not all herbs of one category will be necessarily the same, but the following demonstrates the general principle. 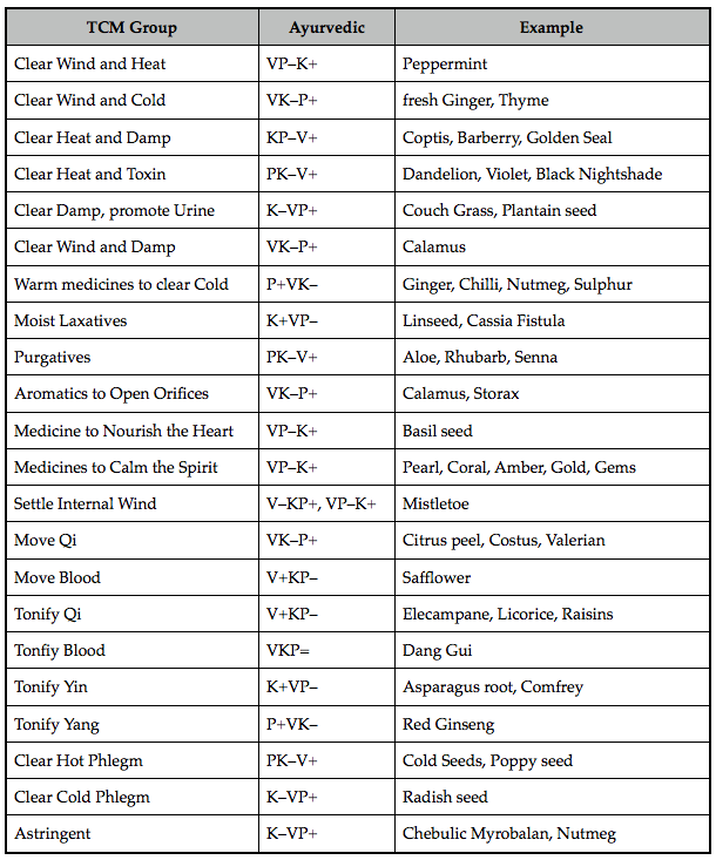 It is important to note that the above is only general. For example, some diuretics are KP–V+, whereas certain of the cooling seeds which are diuretics will be PV–K+. But most, in general, will be K–, meaning they clear Phlegm and Fluid, both associated with the Water element.

The useful thing about this method is inference. For example, because Rhubarb root is PK–V+, we can see that is the same nature as those medicines which reduces Damp-Heat, and therefore, Rhubarb can be used for Damp-Heat conditions as well. Likewise medicines which move Qi can be seen to be useful for disorders caused by Wind and Phlegm, because they tend to be VK–P+. Similarly, all warming spices are P+VK–, meaning they can be successfully used for Wind and Phlegm (or Damp) conditions. European and Tibetan formulas for treating Wind diseases of the head commonly contained lots of warming spices, because Wind disorders commonly come with Cold and Phlegm in cold climates. Warming Spices are P+VK– (their heat aggravates Bile, their aromatic nature settles Wind and their Heat and pungency resolves Phlegm); thus, they are effective for Wind and Phlegm diseases of the Nervous system such as Epilepsy, Dizziness, Vertigo, Headaches etc.

Therefore, when we find a warming Spice in a formula for Cold Phlegm of the Head, the reason for which may not be directly evident from a TCM point of view, we can see that it helps by having the effect of P+KV–.

This useful method of categorising a medicine or group of medicines helps greatly to understand their energetics so that it can be ascertained what conditions and constitutions they are suited for. It is also a very good common ground when integrating the medicines from various systems.