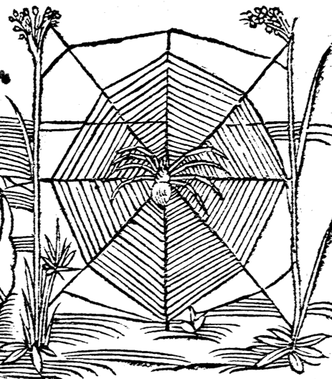 Temperature & Taste:
Cool, dry.
Uses:
1. Stops Bleeding, Clears Heat (TCM, West, others):
-around the world Spider web has been used in various ways for its Hemostatic properties.
-internally to stop bleeding, primarily of the Lungs; rolled into a ball, or roasted to yellow, and taken with wine.
-applied to the umbilicus for Diarrhea and Dysentery
-applied topically to stop bleeding Wounds

3. Malaria (TCM, West, elsewhere):
-‘More effective for Malaria than Cinchona or Arsenic’ (Graham, 1858).
-it was claimed by some to be especially effective for Chills. (Ellingwood)
-listed for Malaria by Dioscorides and in TCM

4. Clears Heat, Stops Coughs, Benefits the Lungs (TCM, West):
-severe coughs, especially coming after childbirth (TCM).
-The US Dispensatory of 1833 listed it for Asthma and Tuberculosis
-taken internally for bleeding of the Lungs.

5. Clears Heat, Astringes the Kidneys:
-Listed for ‘Nocturnal Orgasm, whether in male or female’. (Ellingwood)

6. Externally:
-applied to stop Bleeding of Wounds since classical times.
-applied to creeping ulcers. (Salmon)
-applied to help heal old Ulcers.
-applied to toxic Boils
-applied in preparations to Gout, and Toothache, to relieve the pain.
-applied to the umbilicus for Diarrhea and Dysentery, especially in children.
-Wounds of the Joints, boil Spider web in oil and apply (Pliny)

DOSE:
1 large web can be rolled into a pill or lightly toasted, then taken;
5–6 grains was a common dose;
3–9 webs can be decocted;
It can also be steeped in alcohol to form a tincture.
Main Combinations:
1. Bleeding in general:
i. Typically used as a stand-alone medicine to stop bleeding
ii. taken with Shepherd's Purse to stops Bleeding
2. Hemoptyis, in China, the web was rolled into a ball and taken with Rice congee
3. Nose-bleeding:
i. mix with egg white and stop into the nose'
ii. mix with Purslane juice and insert into the nose
4. Bleeding Piles, Aloe, Frankincense, Dragons Blood, Red Earth, equal parts; rub a large cobweb in the powders, then make a salve by mixing egg white (Wirtzung)
5. Diarrhea and Dysentery, crush Rue and a Spider web and apply to the navel for
6. Toothache, wrap a corn of salt in a spider web and apply to a hollow tooth