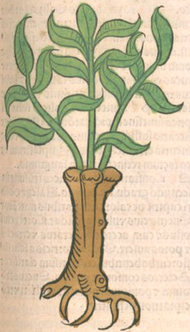 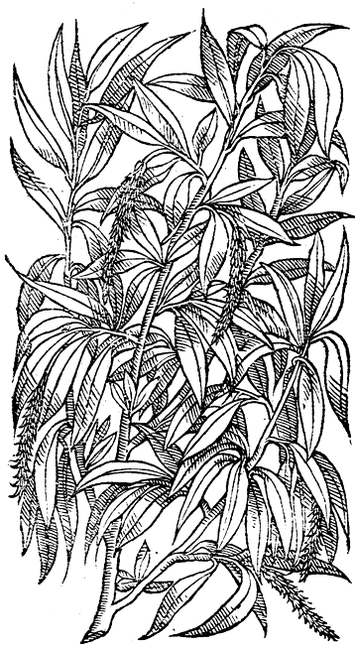 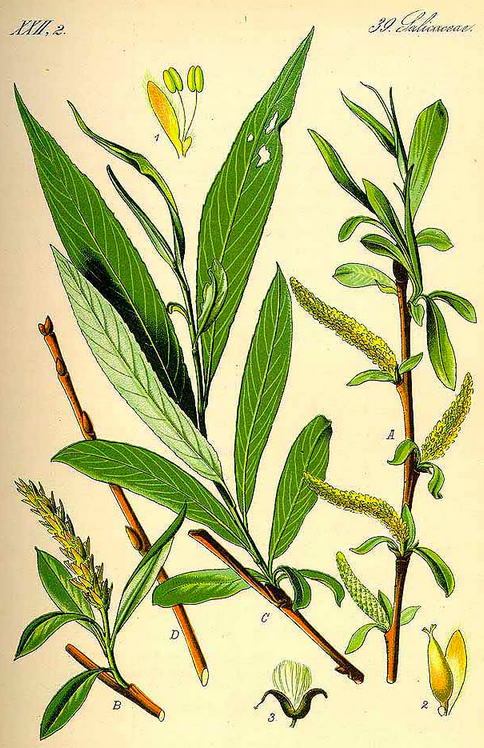 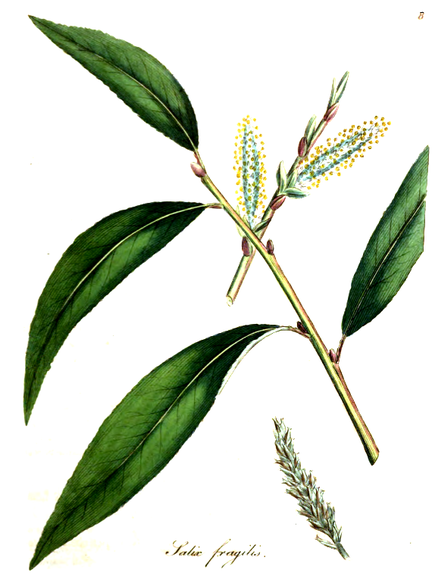 Salix fragilis
Medical Botany, Woodville, 1810
Botanical name:
Salix alba
Other species used include S. penandria and S. fragilis, the last of which was claimed to be the strongest of the species.
In addition to S. alba, Unani uses S. aegyptiaca (Musk Willow), S. caprea, S. acmophylla

5. Stops Leakages and Bleeding:
-bleeding from wounds, the mouth, nose, and other types of bleeding.
-chronic diarrhea, Dysentery, and Spermatorrhea. (The seeds, bark or leaves were traditionally decocted in wine)

6. Externally:
-skin disease such as Erysipelas, Eczema and Scurf.
-Sap from the cut tree clear Spots from the face and skin
-leaf decoction in water with one-tenth part of wine vinegar added was used for Erysipelas and Herpes. (Herbarium Horstianum)
-ashed bark is mixed with vinegar and applied topically to Warts, Corns iv. the Sap is used externally to clear the skin
-leaves or bark are decocted in wine and used as a wash for Dandruff (Dioscorides)
-decoction of the leaf and bark is used as a wash for Gout.
-oil obtained from the Wood (with heat) is anointed on for Numbness, Lack of Feeling or Shaking of the Limbs.
-Sap gathered by cutting the bark while the tree is in flower is good for dimness of Sight, redness of the Eyes, or Films growing over them.
-foot bath in the heat of Fevers, and bleeding Noses
-Buds or Bark stop Bleeding, applied
-ashes of the Bark cures Warts and Corns

NOTE:
1. Musk Willow is regarded as strong than Common Willow.
2. ’The Mistletoe [of the Willow] is commended highly to cause Delivery’. (Schroder)

Cautions:
1. Not used in Cold and Weak Kidneys or Yin deficiency
2. 'the leaves cause barrenness' (Dioscorides)

Main Preparations used:
Distilled Water of the Leaves
History:
Pilny on Willow:
'The fruit of the willow, before it arrives at maturity, is covered with a down like a spider's web: gathered before it is ripe, it arrests discharges of blood from the mouth. The bark of the upper branches, reduced to ashes and mixed with water, is curative of corns and callosities: it removes spots also upon the face, being still more efficacious for that purpose if mixed with the juices of the tree.
'The juices produced by the willow form three different varieties; one of which exudes in the shape of a gum from the tree itself, and another distils from an incision some three fingers in width, made in the bark while the tree is in blossom. This last is very useful for dispersing humours which impede the sight, acting also as an inspissative when needed, promoting the discharge of the urine, and bringing abscesses of all kinds toahead. The third kind of juice exudes from the wounds, when the branches are lopt off with the bill. Either of these juices, warmed in a pomegranate rind, is used as an injection for diseases of the ears. The leaves, too, boiled and beaten up with wax, are employed as a liniment for similar purposes, and for gout. The bark and leaves, boiled in wine, form a decoction that is remarkably useful as a fomentation for affections of the sinews. The blossoms, bruised with the leaves, remove scaly eruptions of the face; and the leaves, bruised and taken in drink, check libidinous tendencies, and effectually put an end to them, if habitually employed.
'The seed of the black willow of Ameria, mixed with litharge in equal proportions, and applied to the body just after the bath, acts as a depilatory.' (The Natural History of Pliny, trans. by Bostock and Riley, Vol. 5, 1856)
Copyright © 2015–2021