i & j
The letter ‘j’ is a relatively new addition to the language, so was often represented by the letter ‘i’, just as it was in Latin. For example ‘iaundice’ is commonly used for jaundice in pre 1600 writings.

missing or added 'e'
Often 'e' is added, for example 'blynde' and 'Byrdes', as given above. However, other times such as 'therwith', and e may be dropped.

Ending in ‘eth’ or ‘ath’
‘avoideth’ may be written for avoid; ‘hath’ for has etc.


Abbreviations
ana, means ‘of each a like amount’
M, means manipulum; a handful 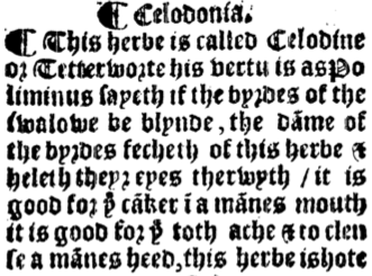 Celandine
This herb is called Celandine
or Tetterwort, his virtue is as
Poliminus says if the birds of the
swallow be blind, the dame of
the birds fetches of this herb &
heals their eyes therewith; it is
good for the canker in a mans mouth,
it is good for the toothache and to cleanse
a means head, this herb is hot ...
(From 'A Book of the Properties of Herbs', Anon, 1541?) 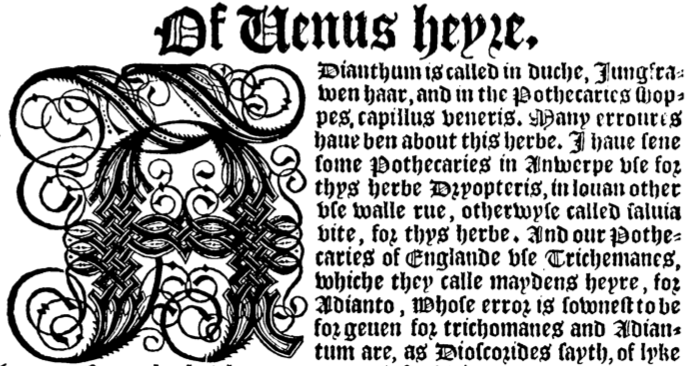 Of Venus Hair
Adiantum is called in Ducth, Jungfra-
wen haar, and in Apothecaries shops,
Capillus Veneris. Many errors
have been about this herb. I have seen
some Apothecaries in Antwerp use for
this herb Dryopteris, in louan other
use Wall Rue, otherwise called Salvia
Vitae, for this herb. And our Apothe-
caries of England use Trichomanes,
which they call Maidens Hair, for
Adianto, whose error is soonest to be
forgiven for Trichomanes and Adian-
tum are, as Dioscorides says, of like ...
(Turners Herbal, 1551)