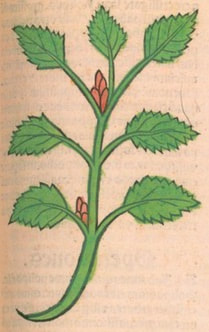 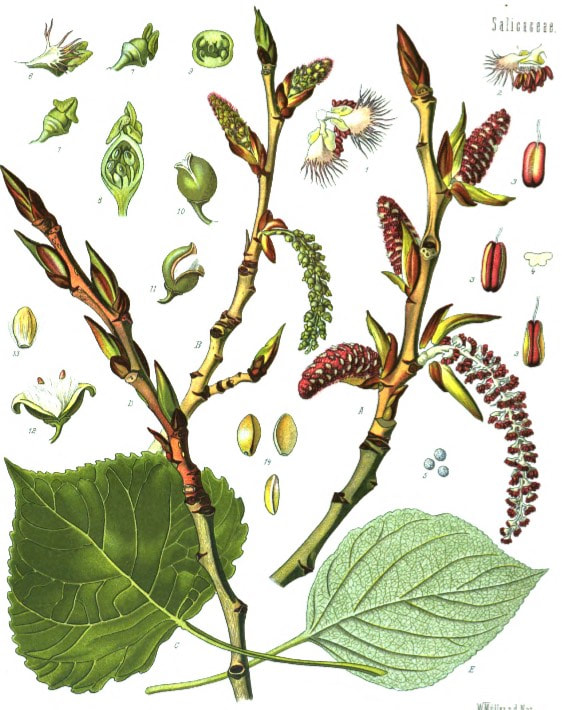 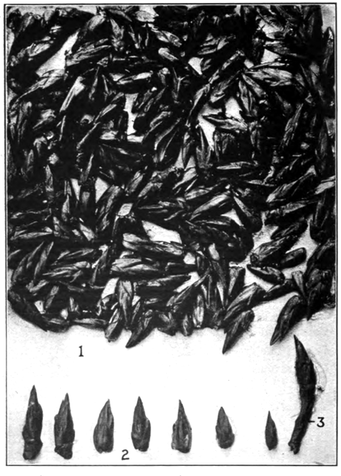 Parts used:
Bark, Buds, leaf of the Black Poplar; Bark of the White Poplar.
Avicenna said the Bark and the Gum of the White Poplar are used.
Salmon (Seplasium) said:
Temperature & Taste:
‘They are both of a mixed Nature, both moist and dry, inclining to Cold’ (Schroder); Black is Colder.
Uses:
1. Clears Heat and Damp, Promotes Urine:
-Strangury, Difficult, Painful or Dribbling Urine;
-more recently it has been used for Prostatitis, Prostatic Hypertrophy, and Prostate Adenoma.

2. Clears Damp, Settles Wind:
-Seed in powder, taken with Vinegar was given for Epilepsy.
-Arthritis, Sciatica (Bark, since Dioscorides)

3. Externally:
-Black Poplar buds are used in Poplar Ungent, which was their principal use, used for Heat, Inflammation and Arthritis.
-topical applications of preparations of the bark are useful for Pain such as Joint Pain and Rheumatism, as well as Headaches etc.
-Poplar salve is very good for Kidney pain, Gout and Arthritis
-Black Poplar leaves mixed with vinegar and applied.
-the sap applied cures Warts, Impetigo, ‘Pushes, Wheals, and other like breakings out in the body’. (Culpeper)
-Leaf juice dropped into the Ears eases their pain.
-the buds are used in preparations for Hemorrhoids
-fresh leaves bruised with vinegar are applied to Gout and Joint pain
-the buds, leaf or bark have all been used for Burns and Wounds
-buds have been used topically for Frostbite and Sunburn.
-buds of the Black were used in hair washes, or steeped in fresh butter to improve the Hair.
-decoction of White Poplar bark used as a wash for Dandruff (Avicenna)
-‘Buds or Seeds of the Black are used by Women to increase and adorn hair, and to allay pains’. (Schroder)
-‘the juice in the holes of the Tree, cures Warts and Impetigines [Impetigo]’. (Schroder)

Comment:
The above species are similar, with different parts being preferred from the varying species. Aspen leaf is used like Black Poplar.
Main Combinations:
1. To clear Heat and Inflammation, and ease pain, the buds are made into an ointment with Poppy, Blackberry tips, Black Nightshade, Wild Lettuce, Violet (as in Ointment of Poplar)
2. Sciatica, Populus Tremuloids bark, Juniper (one part each), Myrica, Ginger (half part each). Decoct and take a wineglassful 3 times daily.
3. Arthritis, make a strong decoction of the bark and drink a quarter of a pint three times daily.
4. Gout of the Feet, Poplar salve, Red Earth, Oil of Roses (equal parts), form a Salve (Wirtzung)
5. Burns, Poplar Salve mixed with Egg white and applied.
6. Ear ache, White Poplar leaf extract boiled with Rose oil and Pomegranate peel. (Avicenna)

Cautions:
1. Avoid overdose.
2. "The Leaves of the White being drunk cause barrenness" (Salmon)