Adam Tate, 2019
Pectoral, from the Latin Pectus, refers to the Chest. Thus, Pectoral Medicines are those attributed to the Chest, Lungs and Airways. The standard and most common Pectoral Medicine was the Pectoral Decoction. The Pectoral Decoction, of which there were many versions, was essentially dried fruit (Raisins, Figs, Dates), with Licorice, sometimes Barley, and usually some herb appropriated to the Respiratory organs (Coltsfoot, Maidenhair, or Hyssop).

This fine, pleasant Decoction, often made up into a syrup with Honey or Sugar, is sweet-tasting, strengthening, a mild expectorant while being good to stop Coughs and increase respiration. It was made to be safe for young and old, primarily a strengthening medicines for the Lungs, but which helps clears the airways and make breathing easier.

It can thereby be used by Young and Old, for both acute and chronic Lung diseases, and is a very good vehicle to give other stronger medicines for the Lungs.

Such decoctions were kept ready-made at the Apothecary and in Hospitals for use as needed on a daily basis.

2. Licorice
The admirable effects of Licorice as a Lung medicine are known in all Traditions. It strengthens the Lungs, increases Qi, clears Heat and Toxin, relieves Sore Throat and stops Coughing. Its tonic nature makes it effective for Chronic Lung weakness while its effect in clearing Heat and Toxin makes it good for acute Cough with Sore Throat. Its pleasant taste makes it readily accepted by children too.

3. Maidenhair
Maidenhair was highly regarded for Lung weakness, to increase Respiration and stop Cough. It again has use in both acute and chronic Coughs and Lung diseases.

4. Hyssop
Hyssop clears Heat and Toxin from the Lungs. It is a useful herb for Cough and Wheezing and is often used in the Pectoral Decoctions. It is also useful for sore Throat, Tonsillitis etc.

5. Coltsfoot
Coltsfoot is a very useful herb for all conditions of the Lungs, and can be used in basically any Lung disease depending on the medicines its combined with. It clears the Lungs, promotes a free breath and strengthens the Lungs when combined with the fruits and Licorice.

Other additions:
Often Pearl Barley is added. This helps make it more nourishing, better to clear Heat and toxin, and along with the fruit, makes the decoction a little more syrupy, and therefore better to soothe the Throat and stop Coughing.
Some added Marshmallow or Elecampane root, both working to strengthen the Lungs, the former nourishing Yin, the latter, increasing Qi.
Sometimes Aniseed or Fennel seed were added.


Some Samples of Pectoral Decoction:

The First is from Pharmacopoeia Augustana (1564):

The next version is from the London Pharmacopoeia, 1650. It adds Coltsfoot and Figs, both good additions: 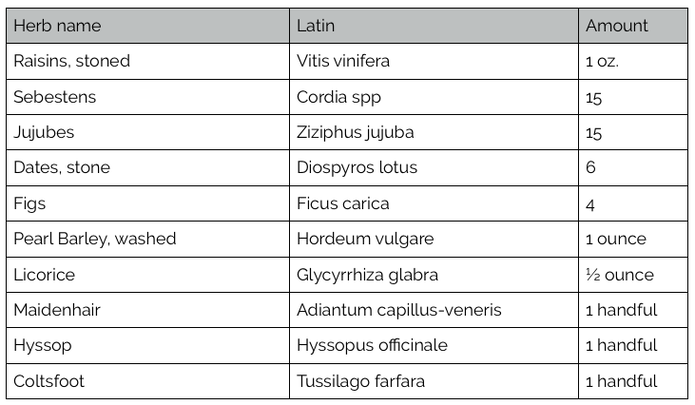 Also note that the Syrup of Licorice of Mesue is effectively a simplified version, without the fruits:

The indications for this are Cough, Bronchitis, shortness of Breath and obstructed Phlegm of the Lungs.


Additions:
1. To increase the strengthening effect on Lung Qi, add Elecampane
2. To increase the strengthening effect on Lung Yin, add Marshmallow and/or Comfrey root
3. Acute Cough, Cough in Children, add Thyme
4. With thick Phlegm with Breathlessness, Asthma, take with Powder of Turbith (Avicenna), Compound of Turbith with Aniseed, or with Pills of Agaric.
5. Marked weakness of the Lungs, take with Fox Lung powder
6. Consumption, take with Tragacanth Cooling Powder.
7. Some added 4 Cold Seeds to help nourish the Yin and moisten dryness.


Conclusion:
This basic formula is very useful for a wide variety of Lung conditions. Fundamentally, it is anti-tussive, useful to help stop Cough. However, it frees the Lungs, promotes expectoration, and due to the nutrition, can strengthen the Lungs with continued use.

It is easy to recreate for modern use, and ample experience shows that it is both effective, and can be made with numerous modifications, additions and subtractions.