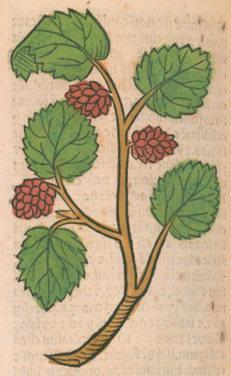 Temperature & Taste:
The Mulberry tree, in general, is Cool.

UNRIPE BERRIES (cold and dry in the 3rd degree, very binding):
-all Fluxes, Diarrhea, Dysentery, Uterine Bleeding, spitting of Blood (similar nature to Pomegranate peel and flower)
-sore and ulcerated Mouth and Throat (gargles etc)
-Dioscorides said they are used instead of Sumac

COMMENT
The White and Black Mulberries, as used in East and West respectively, are similar and closely related species. There are similarities in the use in East and West, but some differences. The Root-bark was regarded as strong to 'purge' water in the West; while the White Mulberry root-bark is used to pass urine in TCM, it appears to be not as strong as its western counterpart. The leaf is an important medicine in TCM, but was rarely used in the West. In both systems, unripe Mulberries have been used as astringents, while Ripe mulberries are used to nourish the Blood and Yin. According to various sources, they may be used interchangeably. However, we have separated the Chinese use of the various parts of the Mulberry tree because of their specific uses that are different to the use in the West.