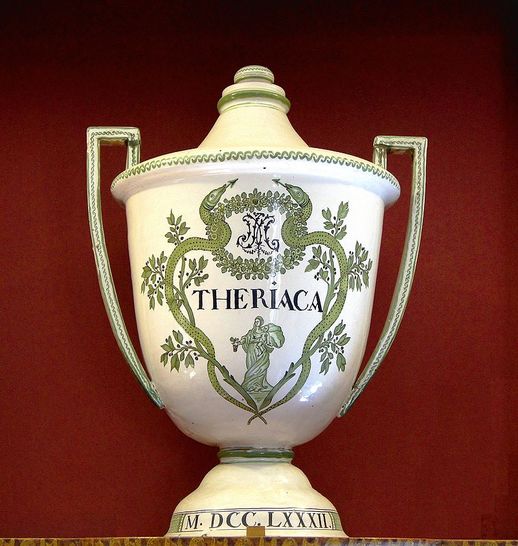 
There were two great and noble compounds used throughout Europe since ancient times. These were Mithridate and Theriac.
The former, named after Mithridate (132-63 BC), King of Pontos, was first made to protect the King from all poison. So paranoid of poisoning was the King that it is said he tested poisons against condemned prisoners before giving them traditional antidote simples. Those that proved their efficacy against a certain poison were combined into Mithridate’s grand formula.
Mithridate was a ‘most generous and most learned Monarch, who understanding the languages of 22 Nations, and having much skill in Medicine, made this noble Antidote against Poison, whereof he was most afraid: by the use whereof, he lived long free from all virulency and deletery qualities’.
After his death, a manuscript of medical commentaries was found. A certain Pompey took these to Rome, giving them to the Roman Physicians Damacrates and Andromachus, who both approved of all the remedies listed, but were especially intrigued by his Mithridate. Damacrates rendered the formula into Latin verse in an effort for it not to be modified from its original
The latter, Theriac, which became known as Treacle in England, was originally designed by Andromachus the Elder, physician to Nero, but was later modified by Galen, where it was to become a standard medicine for nearly two millennia. During the 16th-18th centuries, the best was that made in Venice, hence its alternate name, Venice Treacle.
In Venice and other Italian and  European cities, the towns best physicians, along with noblemen and even royalty would attend, and an elaborate ceremony was performed during which Theriac was made. All the medicines to be used were put out on display to ensure the quality and certainty of the ingredients. Then, with elaborate ritual and reverence, the medicine was formulated according to the traditional method. This was partly to ensure the quality and also as a way of promoting the product against rival cities.
Both these medicines were designed and used primarily against all Poison–both vegetable and mineral poisons, as well as Contagious and Epidemic diseases including the Plague; in fact, for almost 2 millennia, these were the staple medicines used in such conditions. They were also used for a wide variety of other disorders, for which they were often added to other compounds or taken with certain vehicles.
Theriac had many versions made in various European towns. Later, the Pharmacopeias of London, France and others would rewrite their own version which was usually greatly simplified and relieved of its unobtainable ingredients.
Because they were much sought after, and relatively expensive, they were often counterfeited. Ibn Ridwan in his Useful Book (12th c?) relays the story of one who supposedly prepared the Theriac of Andromachus, and wished to prove its efficacy. He ordered two cocks to be bitten in the same place by a snake, administered his remedy to one and not the other. Apparently the cock that took the medicine died, while the other cock lived.
Mithridate, Treacle of Andromachus, Philonium and Diascordium formed ‘The Four Capitals’ being the cornerstones of medicine, particularly in the treatment of Epidemic and Infectious diseases.

Mithridate was taken for all types of acute diseases, and was used in numerous different manners, both internally and externally. It was principalle used to avert and treat Epidemic and Infectious diseases

Uses of Mithridate from Wirtzung (1598):
1. To strengthen the stomach after purging in Heat of the Head with Melancholy (with Bugloss conserve)
2. In an external wash for head wounds (with Theriac, Egyptian Ungent, Aqua Vitae and Carduus water)
3. Taken to beautify the Face (not in young, hot people)
4. Pain of the Eyelids (applied topically to the eyelids and held in the mouth)
5. ‘a special property to put away the clouds, and all that swarm before the eyes’.
6. Cancer of the Nose: ‘chiefly Treacle and Mithridate thrust into the nostrils, and to hold the same in the mouth and eat it’.
7. Good for Tinnitus and loss of hearing, taken after purging with conserve of Bugloss
8. Improves Memory, taken after purging
9. Vertigo: ‘Treacle and Mithridate are also much commended for this purpose’.
10. For Dead Palsy
11. Epilepsy, after purgation, taken with Balm water.
12. Swelling and Falling down of the palate [of the mouth] through Cold’.
13. Loss of Speech (as a gargle in water of Sage, Marjoram and/or Rosemary)
14. Toothache, internally and topically
15. Sore Throat through Phlegm (no heat signs)
16. Cold and Moist Cough (after purging)
17. Asthma
18. ‘Treacle and Mithridate do marvelously withstand the spitting of Blood, if there be taken of them one dram and a half, tempered with Vinegar and Purslane water’.
19. Phthisis and Consumption
20. ‘Fainting of the Heart’; Heart weakness
21. Palpitation
22. Hernia through Wind: ‘the patient every morning [is] to take seven hours before meat one dram of Mithridate with two ounces of the water of Rue. This is a divine medicine to expel wind, and to take away the occasions thereof’.
23. To increase Semen
24. Dysentery (not heat-type)
25. Stomach Pain (taken in wine)
26. Liver obstruction through Cold, ‘very commodious’.
27. One-1 ½ drams taken with wine potently provokes sweat in Edema
28. To cleanse the Blood of Melancholy
29. Kills Worms
30. Gravel and Stones, taken with Decoction of Chickpeas
31. Excessive Urination from Cold, ½–1 dram, taken with wine
32. Gently promotes Menstruation
33. Arthritis, take 1 dram twice a week, or alternate with confected Chebula
34. Small Pox
35. Swelling of the Veins, applied topically
36. To promote sweat
37. Tightness of the Sinews
38. Clear Phlegm
39. Plague, Epidemic and Infectious diseases
40. People caring for Plague victims were to take Mithridate daily to avoid infection.

Generally speaking, all the dry ingredients may be powdered together, beginning with the hardest substances, gradually adding the softer ones. The Gums are dissolved together in wine, the Castor and Saffron should be powdered separately, and the Bitumen, Earth and Chalcite can be pulverised together, all these being added towards the end. Either the Troches or Powders of Squill and Vipers can be added to the rest, all being powdered, then added bit by bit to the warmed Honey, adding the Saffron and Castor at the end.

When it is quite cool, it is placed into an earthen vessel which must remain at least one-third empty to allow for the rising which occurs during fermentation which may be quickened by leaving in a warm place. It should be stirred with a wooden spoon twice a week, for around 15 minutes each time for the first 2 months, then once a week for another 4 months, making 6 months in total, which was said to be the minimum required time for the full fermentation to take place.
Originally, the Honey was mixed with sufficient wine, and they were both boiled together to clarify the Honey. But this leads to a lessening of the positive qualities of the Honey due to the more volatile parts flying away with the alcohol. Therefore, the Honey can be clarified by being very gently heated without addition, removing the scum as it arises.
As with Mithridate, Theriac was used for various conditions, mostly of an acute nature, and especially in the prevention and treatment of Epidemic and Infectious diseases. It may be used for acute Fever, all types of Poison, Cough, Asthma, Pneumonia, etc.

Dose: children may take 1–3, or 4, and up to 6 grains, depending on age and severity of the disease; Adults may take 1 scruple to 1 dram, and up to 2 drams for strong constitutions, or in urgent cases. It was typically taken in a dose the size of a Hazelnut.
Over the centuries, various reformations were made of these classic and complex formula. Numerous substitutions and alterations were made but the most significant changes were in the drastic simplifications that occurred in the 18th and 19th centuries. Various authors and Pharmacopoeias published greatly simplified versions, intended to have the same effect. From a practical viewpoint, and especially if they were wanted to be recreated, these are most relevant

They also serve to show a basis from which other medicines from the original formulas could be added.