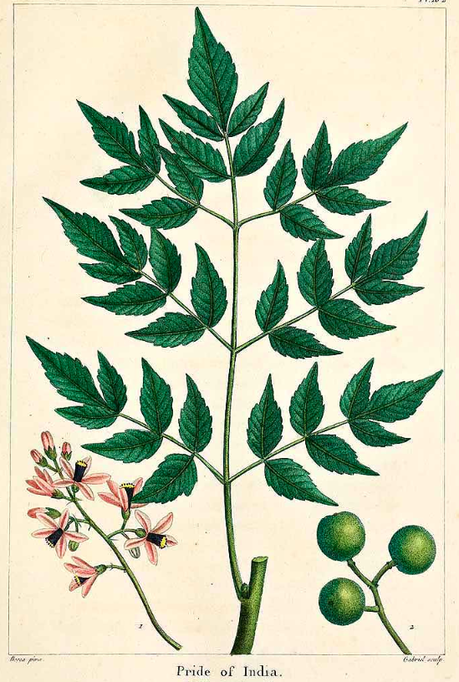 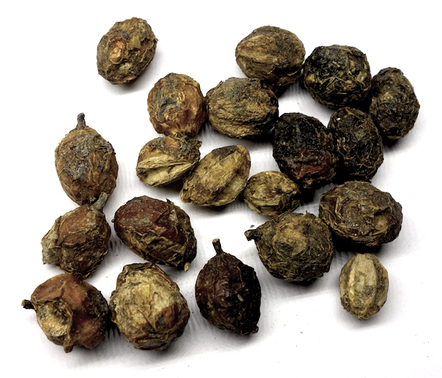 4. Clears Heat, Opens Obstructions: (Ayurveda)
-Phantom Tumor
-nausea, vomiting
-Dyspnoea
-'The fruit, especially its pulp, is a cleansing agent for the viscid humours and it removes the obstructions of the viscera when used after mixing it with vinegar and water'. (Avicenna)

5. Externally:
-anti-rheumatic (seed oil)
-topically for Ringworm, Tinea (paste with vinegar applied or used as a wash) (Ayurveda, TCM)
-fruit is used for pityriasis, freckles, scars (Avicenna)
-fruit in ointnents for all types of hard swellings and Warts (Avicenna)

SUBSTITUTE:
1. It is similar to Neem and in some cases, Neem may substitute
FRUIT:
1. Equal amount of Madder (Avicenna)
2. Half the amount of Cassia bark (Avicenna)
3. Mace (Avicenna)

NOTE:
1. There can be confusion between Melia azedarach and Azadirachta indica (Neem). They are very similar in appearance so the former was named after the latter.
2. Also note this is equivalent to Melia toosendan, Chuan Lian (Sichuan Chinaberry). Both these species may be used as a source of the Bark or Root-bark. However, only Melia toosendan is used as a source of the Fruit. (see separate entry)
Main Combinations:
Often combined with Neem

Cautions:
1. Strictly avoid overdose (see Toxicity). Fruit is Toxic.
2. Damages the Stomach Qi due to its bitterness and coldness; use cautiously in those with weak digestion. Avicenna said 1 mithqal (4.5 grams) causes severe vomiting and diarrhea.
3. Not used during Pregnancy, with Heart or Liver disease, severe weakness, anemia or gastric ulcers.
4. Side effects may occur within normal dosage ranges. Side effects may include nausea, vomiting, abdominal pain, dizziness, drowsiness and cease when the herb is discontinued.

TOXICITY:
Overdose can cause severe vomiting and diarrhea, toxic hepatitis, internal bleeding, and even circulatory failure.