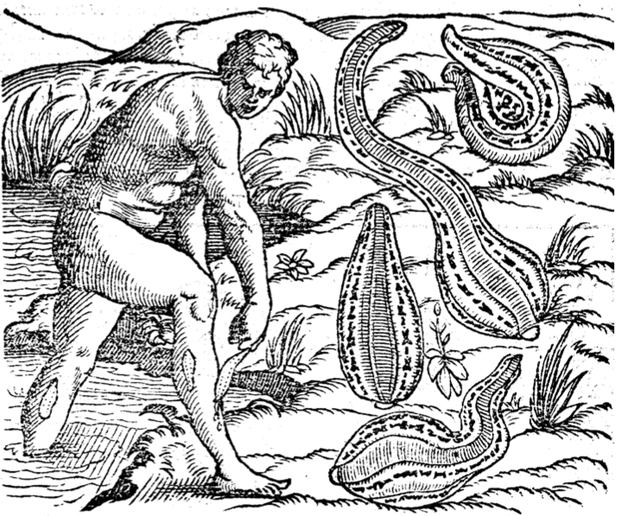 Introduction
Leeching has been used for a long time in the Western Tradition. Where exactly it first started in uncertain, but it was formerly widely used throughout Europe, and is still used in Unani and Ayurvedic medicine today. Further, its usefulness has been rediscovered in modern medicine where it has been found useful in certain circumstances, such as after cosmetic surgery to promote healing with less scar tissue. Leeches are also used internally in TCM.

There are over 600 species of Leech, but only around 15 species are used medicinally, often collectively termed 'Hirudo medicinalis', the Medicinal Leech.

Leeches contain a number of medicinal substances in their saliva which have potent effects. One of the most important is Hirudin, a blood-thinning factor similar in effect to Heparin. Other factors have anti-thrombotic, anti-inflammatory, analgesic/anesthetic effects and vasodilating effects, amongst others. Antibacterial substances have also been found.

It should also be noted that these medicinal effects are used internally in TCM where leech-containing medicines are taken inwardly for the same purposes to clear blood stasis, resolve masses and ease pain ('Moving the Blood').

The classical concept when a Leech takes blood is that it only removes 'Bad blood' and will fall off by itself when good blood comes. Certainly, when a Leech is applied to an area with veins noticeable, the darker venous blood will be drained, removing the thicker, darker 'bad' blood while simultaneously injecting a small but potent dose of Hirudin which thins the blood in the area, making venous return and the entry of 'fresh' blood into the area far easier.


History
The earliest document of Leeching appears in Egyptian paintings from around 1500 BCE (3500 years old). That illustration shows Leeches being used on the Head of a patient. But evidence suggests Leeches have been used in various cultures since the Stone Age.

Left: fresh Leeches ready to be used.  Right: Leeches in bottles with the patients name and date of last using, ensuring only the same Leeches are used each time for the patient. (Calcutta Unani Medicine College, Adam, 2019)

Medicinal Effects:
1. Anticoagulant:
Contains several enzymes and compounds that stop coagulation, most notably, Hirudin which binds to thrombins thereby preventing coagulation. It also contains Calin which prevents the von Willebrand factor binding to collagen as well as inhibiting platelet aggregation. Leech saliva also contains Factor Xa inhibitor, further preventing Blood coagulation.
2. Antithrombotic
Leech saliva contains Destabilase which has a thrombolytic effect, thereby helping dissolve clots.
3. Fiibrinolytic
Destabilase, as well as other compounds, have Fibrinolytic effects thereby helping dissolve fibrosis in clotting and potentially in Fibroid growths as well.
4. Anti-inflammatory:
Bdellins and aglins are compounds from Leech saliva that have anti-inflammatory effects. The former works by inhibiting trypsin, plasmin and acrosin.
5. Vasodilating effect:
Several compounds have been identified as having vasodilatory effects. This includes histamine-like substances, acetylcholine and carboxypeptidase A inhibitors. All these open the blood vessels to allow greater blood flow as a residual effect after cessation of the Leeching therapy.
6. Anesthetic/Analgesic
Certain compounds have anesthetic and analgesic effects. These are naturally occurring to allow a Leech to feed off the host without the host knowing. But these effects can have a useful and potent effect in localised pain from inflammation of blood stasis.
7. Antibacterial
Some compounds have shown antibacterial effects
8. Systemic Effects:
The above effects have a generally beneficial effect on Blood circulation throughout the body. Vessel dilated, Blood is thinner and clots and fibrosis is dissolved. Therefore, a course of Leeching can have a very beneficial effect around the body, especially concerning Blood circulation.

It should be noted that these above effects are achieved with internal use in TCM where Leeches are used typically in pills, powders or tinctures.

How to Prepare Leeches
'Horseleeches, the blood sucking water worm, shall be kept sorne days in fresh water before they be used; putting a little blood and bran into the water for their food, then do they lose their venom' (Wirtzung)

Leeches were long recognised to have a type of Damp poison, due to the Damp environment they live in. They were therefore kept in water for several days to lessen their venom. As Wirtzung noted, it was common to add a few drops of blood each day to feed them. This also helps them to become hungry so the drain blood more efficiently. When not prepared like this they often cause a more itchy bite wound which may become more red and irritated.


How to Use Leech Therapy
In modern days, it has become standard practice in Hospitals using Leech Therapy to dedicate a Leech or number of Leeches to only one patient. These are kept in water with the patients name on the container and will only be used for that one patient. This removes all possibility of contamination of blood from another diseases-carrying patient.

General Method:
1. Have the patient seated and relaxed or supine.
2. Warm the area to be bled with a cloth soaked in warm water to draw blood to the area.
3. Apply the Leeches to the area and allow them to bite
4. Leave the Leeches on until they fall off on their own.
5. The bite site can be allowed to bleeding a little longer; a compress can be applied to stop bleeding.
6. The wound site should be covered with a bandage. Traditionally, a compound such as Aloe and Myrrh was applied.
7. In the case that bleeding doesn't stop, a little Alum can be rubbed onto the site.
8. The Leeches are put in a glass jar of water with the patients name and date of use clearly written and these Leeches are only to be used for that patient.
9. Leeching maybe applied once or twice weekly for a number of weeks as a course of treatment. In certain situations they may be applied more regularly, but usually on different sites. For example, in chronic varicose veins, they may be applied to the inside on the ankle, and then a day or 2 later to the outside of the same ankle.

Unani Physicians (such as Bhagdadi) recommended Bloodletting and Purging is best done before Leeching.


Precautions:
1, Hemophilia
2. The greatest precaution is ensuring no cross-contamination of blood by using Leeches only for one patient.
3. Caution in those taking anticoagulant therapy.
4. Also note that some people, especially in the west, may find applying Leeches disturbing and there is a risk of fainting. Therefore, the patient should be seated and relaxed.
5. According to Ruffus, Leeching should not be applied to the Stomach, Epigastrium, over the Liver or Spleen, in old age or lean individuals.
6. Finally, ensure only medicinal Leeches are used, as some Leeches are poisonous and cause swelling, inflammation, intense itching or other undesirable effects.

TREATMENT
11. Unani treatment and leech therapy saved the diabetic foot of a patient from amputation
12. The Vascularity of Ayurvedic Leech Therapy: Sensory Translations and Emergent Agencies in Interspecies Medicine
13. Positive outcome of medical leeches (hirudotherapy) for venous congestion
14. Effect of Taleeq (Leech Therapy) in Dawali (Varicose Veins)
15. Clinical efficacy of Jalaukawacharana (leech application) in Thrombosed piles
16. Medicinal leech therapy in venous congestion and various ulcer forms: Perspectives of Western, Persian and Indian medicine
17. Management of nonhealing venous ulcer in systemic sclerosis with leech therapy—A case report
18. Leech therapy for pain relief: Rational behind a notion
19. The Effectiveness of Leech Therapy in Chronic Low Back Pain: A Randomized Controlled Trial
20. Efficacy of leech therapy in the management of osteoarthritis (Sandhivata)
21. Exploiting leech saliva to treat osteoarthritis: A provocative perspective
22. A Comprehensive Review of Medicinal Leeches in Plastic and Reconstructive Surgery
23. Leech Therapy for Treating Priapism: Case Report
24. Pigment reduction in nevus of Ota following leech therapy
25. A clinical trial for evaluation of leech application in the management of Vicarcikā (Eczema)
26. A clinical study to evaluate the efficacy of leech therapy and panchatikta ghrita in the management of psoriasis)
27. Leech therapy for epidermoid cysts and review of the literature
28. Management of herpes zoster in Ayurveda through medicinal leeches and other composite Ayurveda Treatment
29. Leech therapy (Hirudo medicinalis) attenuates testicular damages induced by testicular ischemia/reperfusion in an animal model

COMPLICATIONS / SIDE EFFECTS
30. Complications of leech therapy
31. Cutaneous Pseudolymphoma As a Rare Adverse Effect of Medicinal Leech Therapy: A Case Report and Review of the Literature
32. Preventing Infective Complications following Leech Therapy: Elimination of Symbiotic Aeromonas spp. from the Intestine of Hirudo verbana Using Antibiotic Feeding
33. Prolonged bleeding due to a medicinal leech bite: another treatment method, primary suture
34. Orbital Cellulitis Due To Leech Therapy
35. Anal abscess due to leech therapy of hemorrhoids: mumbo jumbo is still in vogue
36. Prolonged Bleeding after a Single Leech Application in Pediatric Hand Surgery
37. Non-Occlusive Mesenteric Ischemia Due to Hirudotherapy: A Case Report
38. A rare case of adverse effects caused by leech bite
39. Complications of leech therapy directly on the eyes
© MedicineTradition 2015–2022