Introduction to the Art of Distillation 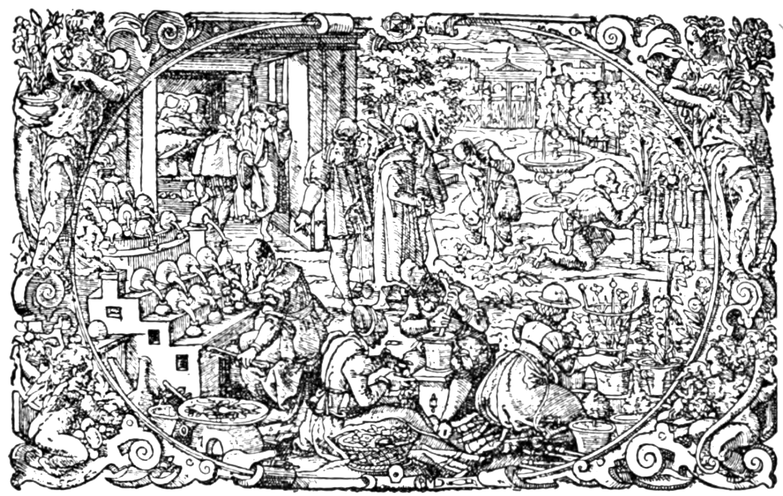 Introduction
Distillation was a major turning point in Pharmacy, and therefore, also in Medicine. Through Distillation, the Essence of a liquid or plant could be separated from the more dense or earthy aspect. This produced a medicine which is clear and won't corrupt like a decoction would, for example. The distillation of Wine gave Spirit (alcohol) which could be used to extract the virtues of plants. Likewise, aromatics could be distilled to give essential oils, useful in both Medicine and Perfumery.

What is Distillation?
Distillation is basically the art of collecting steam, or separating Volatile from the Non-Volatile. When we boil a kettle of water, the steam that comes out is distilled water. If you place a cup over the spout where the steam comes out, the condensation that drops out of the cup is distilled water, and the process, distillation.

There are 2 main parts to distillation: heating the matter to be distilled, and condensing and collecting the steam which rises into a receiver.

The three main parts of a Still are the Vessel containing the matter to be distilled, the Head (Alembic) where condensation takes place, and the Receiver, in which the distilled liquid is collected. 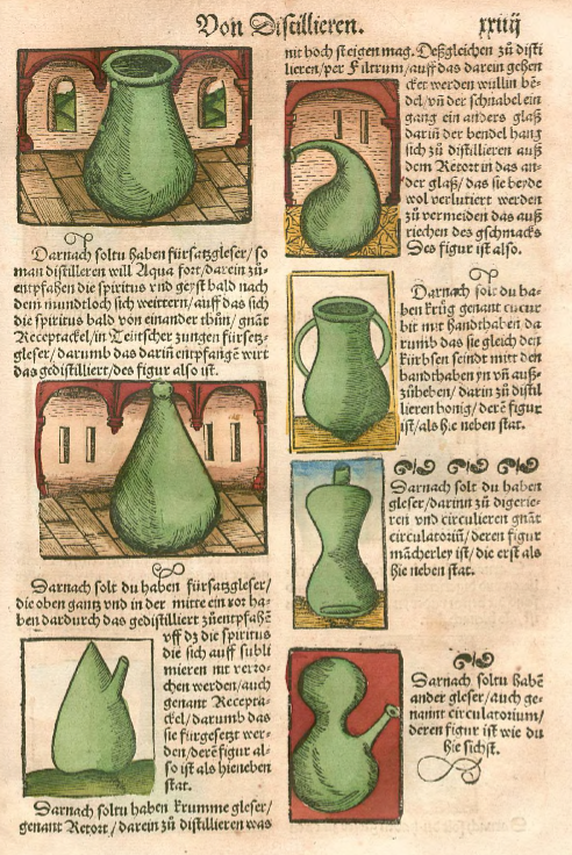 A page from showing different vessels from The Book of Distillation
(Das Buch von Distillieren), Brunschwig, 1532

Above:
Alembics, or the 'Head' of the Still. These were early condensers and
were usually made of earthenware, copper or lead to facilitate cooling.
They were designed to increase surface area and thereby enhance
more efficient cooling. 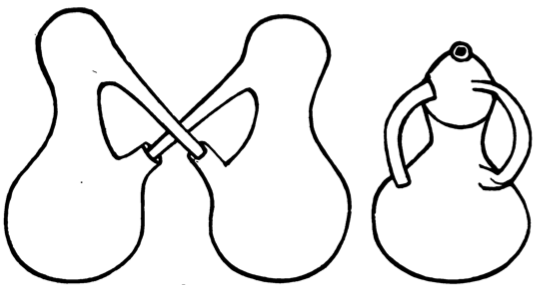 More elaborate Circulatories:
A Double Circulatory (left)
A 'Pelican' (right) with 2 tubes for
returning fluid.
Here we see three types of distillation setup. On the Left is a simple Alembic with a long neck reaching down to the Receiver. The only condensation happening in the long tube between the Alembic and Receiver. In the middle, the same basic setup with a cooling tank to aid condensation. The latter is better for very volatile liquids such as Spirit. On the Right, two sources of water can be seen, the lower feeding water into a Water bath (which moderates the heat), the upper feeding cold water into a bowl surrounding the Alembic (to aid condensation). (Kreutterbuch, Matthiolus, 1586)

Refinements in Distillation
As the popularity of distillation increased, so it became more refined. Larger, more elaborate apparatus were conceived, and variations were developed suited for different purposes. 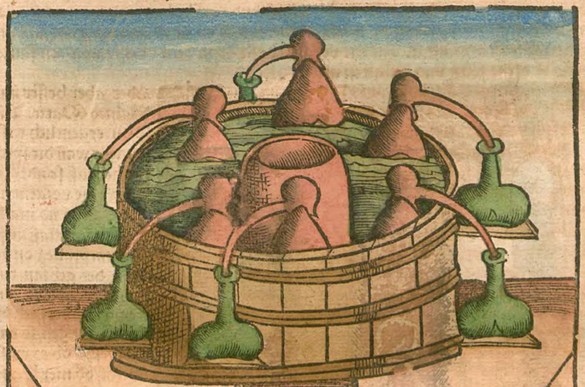 One of the early refinements was the use of a
water bath, or Balneo Marie, the Marian Bath.
The vessel containing matter to be distilled is
sat in a water bath and the water is heated.
This is especially useful for distilling herbs as
it prevents excess heat, the vessel only
reaching a maximum of boiling water
temperature (100 degrees C.). 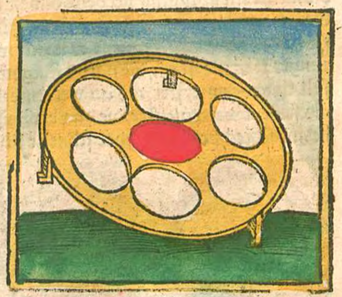 A plate used to sit over a Water-Bath,
the round holes being for vessel to sit in.
This helped stop the boiling away of the Water. 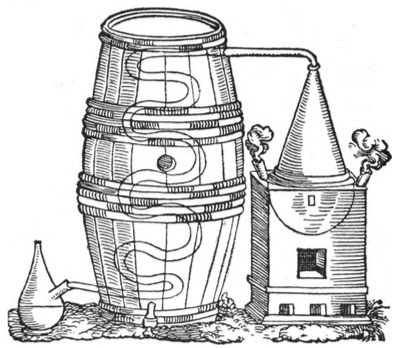 This version, also from Ryff, is suited
to distilling larger quantities. 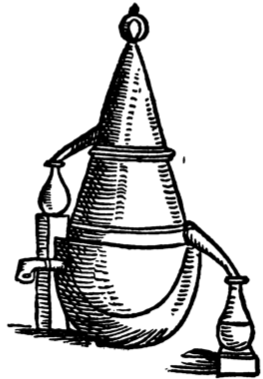 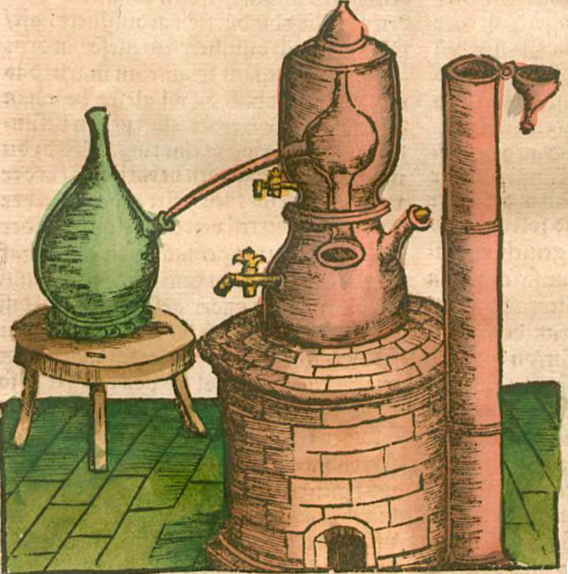 Here we see a distilling apparatus as
may have been found in a 17th century Apothecary. The vessels began to be
made of Copper, and the Alembic is
seated inside a large copper vessel
of water (called a 'Moor's Head'). This
greatly facilitated the condensing of
steam into water. 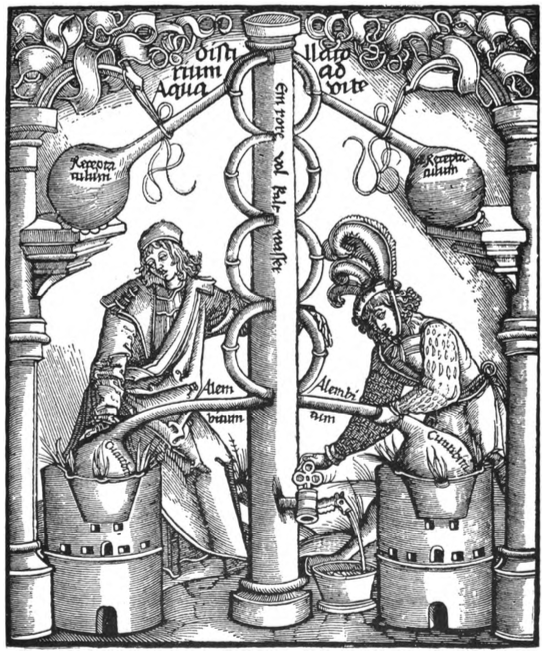 An improved Still. Only the most subtle
spirit will collect in the top Receivers,
the rest being returned to the bottom
vessel.
This type of apparatus is suitable for
rectifying alcohol to get high purity.
Stills similar to this are still used in the
distillation of spirits.
Often a sponge was put in the head
which would condense the water,
leaving the alcohol to pass through
to the receiver. 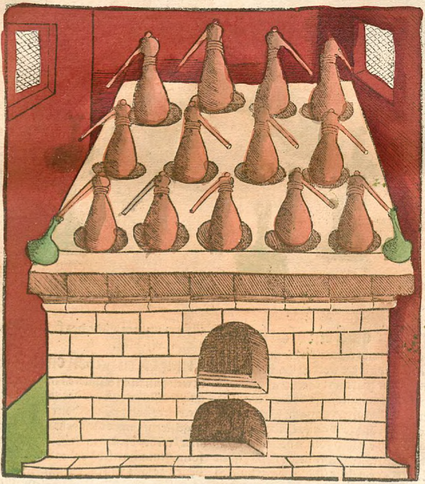 An apparatus used for multiple
distillations at one time. 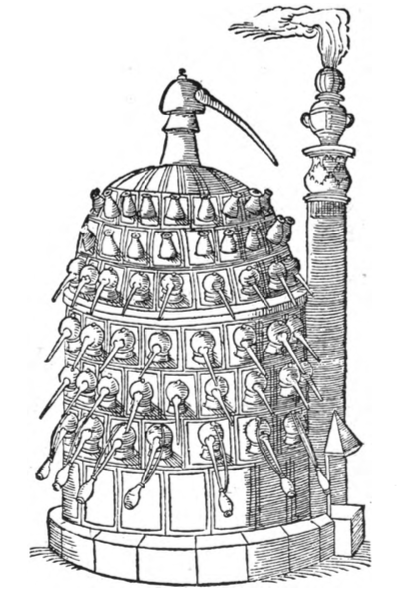 The Herb Book of Matthiolus (1586) illustrated this
vessel which he said was in common use in Venice.
First, the fire is lit and allowed to make the entire
apparatus hot. Then, when the fire dies down, tiles
are used to block the flow of air in, thus maintaining
an even and lower temperature. Distillation is then
started. It is quick and efficient, capable of distilling
100 pounds of water in 24 hours.