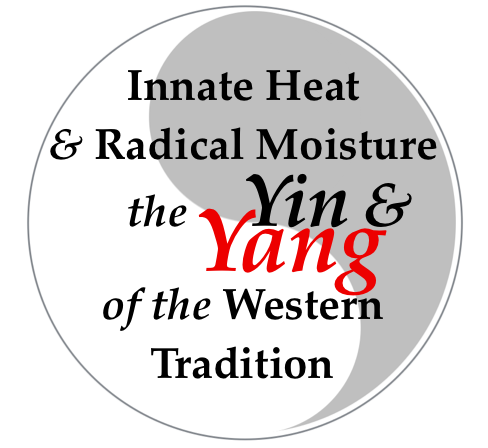 ‘Two natural principles of life are laid down by the Chinese,
viz. vital heat and radical moisture, of which the
Spirits [Qi] and the Blood are the vehicles.
They call the Vital Heat Yang, and the
Radical Moisture Yin’.
(The Chinese Traveller, 1772)

One of the great attractions to Chinese Medicine are some of the foundations at its very core: Yin and Yang, and Qi, Shen (Spirit) and Jing (Essence), known as San Bao, the 'Three Treasures'.

What if, then, we found that the same basic concepts were apparent in the Western Tradition, incorporating Ancient Greek, Roman, European and Middle Eastern medicine?

Semantics often hide the most basic of concepts, or rather, mask them, by causing something to seem to be something different from what we already know.

But it was the Arabs, and Avicenna in particular, who fully elevated this concept and perhaps increased the importance clinically. They believed that Fevers, decay, consumption, old age and death could not adequately be explained by Humoral Theory, but instead, insisted it was due to diminishing Radical Moisture and/or Innate Heat.

Further, Radical Moisture is depleted either by Innate Heat, or putrefaction of the Humors. The first is natural, and happens with age. The second is pathological and requires preparing and cleansing the putrefied Humors, and increasing digestion.

Parmenides (late sixth or early fifth century BCE) is credited with perhaps being the first western philosopher to recognise Natural or Innate Heat (2). He noted that dead creatures were cold while living creatures are warm. Empedocles (490–430 BCE) expanded upon this by saying ‘sleep comes about when the heat of the Blood is cooled in the proper degree, death when it becomes altogether cold’. (3)

Hippocrates said ‘the belly is by nature the hottest in the winter and spring, and sleep is the longest. And in this season food ought to be given plentifully. For there is plenty of innate heat and plentiful nourishment is needed. Those in the prime of life, and athletes, are evidence of this’. (4)

Aristotle followed by saying the Innate Heat is responsible for the power of digestion and that the Heat was cooled or rather moderated by air inhaled. (5)

Galen talked of a work of his specifically on Innate Heat. (6) This work of his has not survived, and so what is known about what Galen said regarding Natural Heat is only what is found scattered throughout his vast works. He, along with Hippocrates and Aristotle placed great importance on Innate Heat, believing it was imperative for digestion, growth, generation of Humors, and distribution of nourishment. He stated that Innate Heat forms the Fetus, that children grow because of it which is why infants were said to have most of it as growing creatures require more. He also stated that as we age, Innate Heat withers and when exhausted, we die.

Avicenna in his Canon often talks of the Innate Heat. He closely associated it with ‘Vitality’. He noted that when breath wanes the Innate Heat lessens, and when Innate Heat is increased due to Nutrition, the breath increases. (7)

The Innate Heat is that responsible for separating the impure from the healthy humors, that is, the digestive Fire which enables proper digestion and separates the pure from the excrement. He also stated that in disease the breath is not in harmony with the formation of the Humors and toxic by-products (acidic or corrosive–the Ama of Ayurveda) are formed, and this is either from improper Innate Heat or a conflict between Innate Heat and pathological Heat.

Radical Moisture in the Bible:
In his Annotations Upon the Five Books of Moses Ainsworth states in reference to moisture: ‘the chief sap, or radical moisture, which is an aiery and oily substance, dispersed through the body, whereby the life is fostered, and which being spent, death ensues’. (10)

And again:
In the Western Tradition, it was the Arab physicians who were responsible for developing and refining the concept of Radical Moisture. Rhazes, Haly Abbas and Serapion all referred to it, but it was Avicenna who gave the most detailed account.

Avicenna gave the metaphor of the oil lamp showing the balance and interaction of the flame (Yang, Innate Heat) and the Oil (Yin, Radical Moisture). But he was not the first to use this metaphor; in fact Galen had even used this metaphor (De ferbris differentiis) and it likewise appears in Chinese Philosophy.

The Radical Moisture is analogous to the Chinese concept of Yin. It is a highly refined part of the process of digestion, not only liquid, but thin, oily and subtle by nature.

There is a part of the Radical Moisture which is acquired from our parents at conception and a part which is replenished from the food we ingest. The small amount of the finest essence of the creation of the Four Humors replenishes our Radical Moisture.

Radical Moisture is associated with
1. The special fluids of the Organs and Glands.
2. The growth and maturation over time.
3. Associated with Humoral Immunity.
4. Longevity (with Innate Heat).

Radical Moisture is lost in the male every time he ejaculates. The Tantric arts of withholding the sperm at ejaculation enables the sexual act with minimal or no loss of Radical Moisture.

In addition, the act of Love in lovemaking helps restore the Radical Moisture, especially of the Heart. So sex with a loved one is far more wholesome than sex for the sake of sex, or self pleasure.

Avicenna recognised the Innate Heat to continually consume the Radical Moisture much like the flame consumes the oil in the oil lamp. He also stated that the Innate Heat is lessened because it is continuously extinguished by extraneous moisture (damp) which accumulates due to weakening of the digestion. This latter is the putrefaction of the body fluids. Thus, the first reason for loss of Innate Heat is physiological, the second, pathological.

Putrefaction makes the fluids unsuitable for use by the body, in other words they are not able to become nutrition, and are therefore termed extraneous.

To prevent the putrefaction of fluids requires sufficient Innate Heat, whereas excess Innate Heat will more quickly consume Radical Moisture. Thus, the delicate balance between Innate Heat and Radical Moisture (Yin and Yang) are dependent on the effect of age on the body, and from this, it can be seen that the Acquired Radical Moisture inherited from our parents is more relevant to living a long life than the restoration of Radical Moisture due to the food eaten. That is why we see some people who smoke, drink and have an average diet sometimes far outlive those who are very health conscious.

Ancient and Natural Philosophy extends back before written records. All peoples from all ancient lands developed a rich understanding of their reality, originally largely based on observation of nature.

With development and trade came the sharing and blending of knowledge, and since ancient times, the Silk Road was a highway of trade in both commodities and knowledge.

The enormous similarities in concepts of Qi (Pneuma), Spirit, Soul, Innate Heat (Yang), and Radical Moisture (Yin), among others, makes it implausible that these advanced concepts were achieved independently. Rather, they were disseminated. I wonder if there was not perhaps a common source for a lot of ancient knowledge.

Regardless, from a practical viewpoint, the fact that these fundamental concepts of traditional medicine are largely synonymous and common makes it easier to accept a concept of ‘Traditional Medicine’, rather than TCM, Ayurveda, Tibetan Medicine etc.