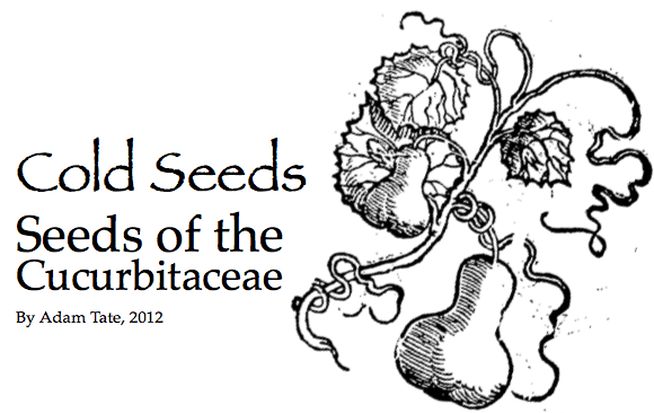 The Four Greater Cold seeds formed a cornerstone in Western Pharmacy for 2 millennia. They are often used in cooling compounds, and in compounds to nourish and moisten, such as would be considered Heat-clearing Medicines and as Yin tonics in TCM.

At times, and in different locations, closely related species may have been substituted. For example, a number of species of Gourd have been used and sometimes related Melon species are used.

They are best used when as fresh as possible, and will not keep over 1 year due to their fat and moisture content.

Further, a number of powders contained the Cold Seeds. These powders can not be kept too long, and it is best to powder shortly before dispensing. It was common with some formulas to keep the rest of the herbs in powder, powdering the cold seeds and adding them to the remaining powders as prescribed. Otherwise they cause the whole compound to go off or become rancid too quickly.


The Nature of the family

In general, the Cucurbitaceae family is Cool. They have a moisture within them, but also clear Damp and Phlegm. They are generally regarded as Cool and Moist in the 2nd degree. The seeds generally contain good nutrition.

ADVERTISEMENT:
A Review of the Primary medicinal members
of the Cucurbitaceae and their Seeds:

2. Bottle Gourd - Laegenaria vulgaris (syn. Cucurbita lagenaria)
Native to India, Molucas and Abyssinia.
There are sweet- and bitter-fruited varieties
Seeds are white, compressed with a marginal groove
a) promotes Urine, for heat and sharpness of Urine, Strangury
b) clears heat of both Blood and Bile

As can be seen above, there are a number of types of Gourd over a number of different species. The species supplying the market appear to have been the Bottle Gourd (Laegenaria) as well as some Cucurbitas. However, other species have been used and may be preferred depending on the intended use or formula.


4. Sweet Melon - Cucumis melo
Found wild in India and tropical Africa
a) diuretic-painful or suppressed urine; for heat and sharpness of Urine; Cystitis; Prostatitis
b) clears heat of both Blood and Bile
c) nutritive

ADVERTISEMENT:
﻿General Actions of the Family


Uses of Other Parts

The majority of the species mentioned have sweet fruits that are cooked and eaten as Food. They likewise have a cooling nature, and tend to clear Heat as well as being diuretic.


Primary Constituents in the seeds of Cucurbitaceae


Compounds in which the Cold Seeds are Primary Ingredients

A large percentage of classical Cooling formula in the Western and Unani traditions rely on the Cold seeds.
They appear in formulas to:
1. clear Heat in Fever and Inflammation
2. Nourish Yin and moisten the Body
3. as a diuretic and in Urinary diseases
4. Tonic formula.


Sample Formulas in which the Cold Seeds are used