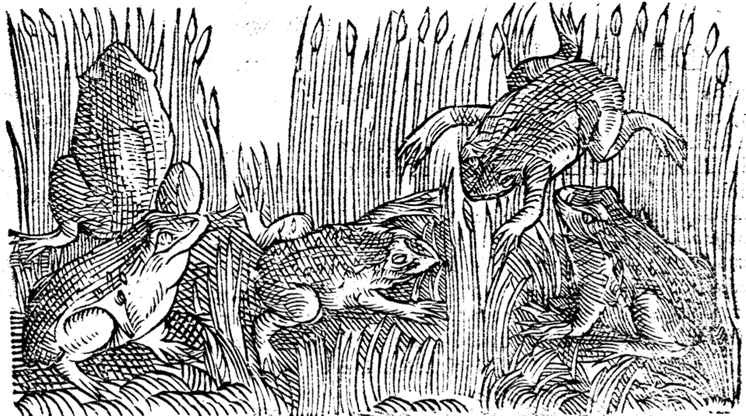 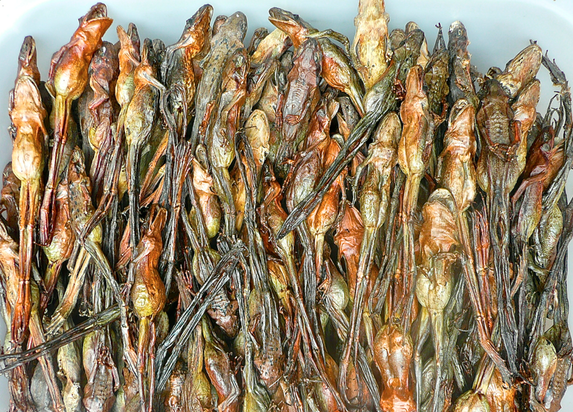 NOTE
As stated elsewhere, MedicineTraditions does not support harvesting wild endangered animals for medicine. Frogs are becoming endangered in many parts of the World. However, Frogs are farmed for eating in many regions including Europe, and the Frog farming for both food and medicine in Asia is massive.
Zoological name:
Rana species including R. temporaria and numerous others.
The Bull Frogs including R. tigrina can also be used
Frog Oviduct is collected from the common Chinese Brown Frog R. dybowskii, Forest Frog Rana temporaria chensinensis and others.

6. Stops Bleeding:
-‘Frogs burnt to ashes stay blood’ (Dioscorides)
-Often applied with Vinegar, it was used for bleeding from the nose or uterus, or from sores and ulcers.
-Albertus said ‘the ashes of a Great Frog, borne at a woman's girdle, restraineth greatly the coming of a woman's natural purgation’.

7. Externally:
-Applied to cure Alopecia, usually in a plaster with pitch (Dioscorides)
-Frog Ashes, mixed with water and applied, removes Hair (Albertus).
-The ashes are also applied to burns and boils. (Magic of Kirani, TCM)
-ashes applied to Eczema of the Ear. (Li Shi Zhen)
-The broth is used as a gargle for Toothache. (Avicenna)
-decoction as a wash to swollen tendons (Avicenna)

Preparation:
Frogs are either dried, roasted to dry, or ashed. To Ash them, they can be covered in clay and baked over a fire until hard and dry. The frog is removed and powdered.

Dose:
Dried Frog in Decoction: 3–9 grams
1–2 roasted Frogs has been used for Edema in TCM
Frog Ashes: 1 scruple–1 dram (1–3 grams); taken 2 or 3 times daily for Cancer. (Barefoot Doctors Manual)
Dried Frog Oviduct: 1–4 grams in pills
Main Combinations:
1. Hectic Fever and Consumption, Frog with Viper powder and Sage (Riverius)
2. Consumption, Frog with Snails
3. Chronic Bronchial Asthma: decoct Frog with Pork Stomach; take every second day. (TCM)
4.  Leprosy: 'Some that have had the Leprosie have been cured by frequent eating of Frogs in Lakes; namely the heat of their blood being abated, and the burnt melancholy being corrected. This you must understand of Frogs that leap, and not those that creep or go slowly for they are venomous'. (Mizald)
5. Edema:
i. take 3 Frogs, putting into their mouth a copper coin with a little Picrorhiza (Hu Huang Lian) powder sprinkled on it. Take a well cleansed Pig Stomach, put the frogs into the stomach and seal it. Simmer overnight. Remove the skin and organs of the frogs, eat them and the Stomach with a little Wine. (Shou Yu Shen Fang, TCM)
ii. Ascites, dry Frogs (2) cut and stir-fried with butter, stir-fried Mole crickets (7), White Gourd seed (Lagenaria) (15 grams). Powder them all, take 6 grams per dose with warm wine. (Sheng Hui Fang, TCM)
6. Dysentery, pound a whole Frog to paste, heat on a tile, then mix a little Musk and apply to the umbilicus. (old TCM)
7. Cancer:
i. A fresh Frog is wrapped in mud. It is baked over a fire until the dirt is hard and dry. Remove the dirt, and powder the Frog.
Dose: 2-3 grams, 2-3 times daily. (Barefoot Doctors Manual)
ii. Cancer of the Uterus: Oil of Frogs applied topically; also, frog boiled and applied as a plaster, while the strained decoction is used as a douche 'which are accounted specifics'.. (Salmon, Synopsis Medicinae, 1681)
iii. Cancer of the Eye, collect a Frog, remove its skin, burn the skin in a sealed vessel, powder, and apply topically. (Zhi Zhi Fang, TCM)
8. Canker: Melt and boil 1 lb. of fresh butter, then add 4 Common Green Frogs and stew until they are dry; then remove them, and add Chamomile and Parsley; let sit until cold, then add a little burnt Alum. Said to cure an inveterate Canker of the mouth, throat or stomach. (The Family Physician and Farmers Companion, New York, 1840.)

Cautions:
1. Some Frogs are toxic, such as the Poison Arrow Frogs of South America. Common Frogs and Frogs used for human consumption are suitable for medicinal use.
2. Excess use of Frogs can cause Anuria which can be remedied with a decoction of Plantain seed. (TCM)

2. DISTILLED WATER of FROGS.
'Frogs may be cut into pieces, and in a glass Cucurbit may be distilled in B.M. with a gentle fire, which you may cohobate 6 or 7 times, so have you a Water of great use in the Gout, and in all Internal pains of the Reins, Ureters, and Bladder. The Magma may be distilled in an earthen retort well Luted, in a close Reverberatory with a long receiver, as Vipers are distilled, so will you have a Volatile salt and Oil with much phlegm which you may rectify and separate.' (Salmon)
Salmon said in the distillation of Frogs, or their Spawn, or of Snails or Earthworms, that it was best to hang them in a linen cloth in the middle of the still; this stops the distilled water smelling foul.

3. FROG SPAWN WATER.
Fill an Earthen pot with Frog Spawn. Cover it well and bury it in the ground half a foot deeper then the pot is high. Leave it for 3 weeks, in which time it will turn to liquid. Strain and bottle. This is used for joint pains, and was much commended for Gout and Arthritis. A cloth is applied with some of this water as hot as can be taken, which is done night and morning until cured.
<
>
Click the Tabs above for more information on this Medicine
1. Traditional Uses, Bioactive Constituents, Biological Functions, and Safety Properties of Oviductus ranae as Functional Foods in China
© MedicineTradition 2015–2022