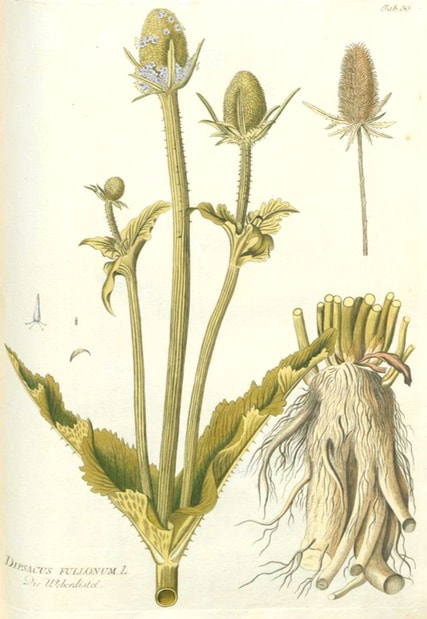 Members CLICK HERE for the PRO VERSION
Botanical name:
Dipsacus spp.
Salmon said there were many varieties, but 2 main types were used. In addition the Chinese (or Japanese) variety is used in TCM:
Parts used:
Root; leaf was used externally in the West


CHINESE:
1. Strengthens Liver and Kidneys, Strengthens Sinews and Bones:
-weakness or pain of the lower back; stiff joint

3. Used for Trauma:
-Bruising and Trauma, especially of the Lower Body

Comment:
The European and Chinese Teasel are closely related and are similar in appearance. Despite the fact that European Teasel was not commonly used and appears in no traditional formulas, the Western Teasel may be used similarly to the Chinese Xu Duan. Garran, in his Western Herbs according to Traditional Chinese Medicine states that the Western Teasel can be used the same as Chinese Xu Duan.