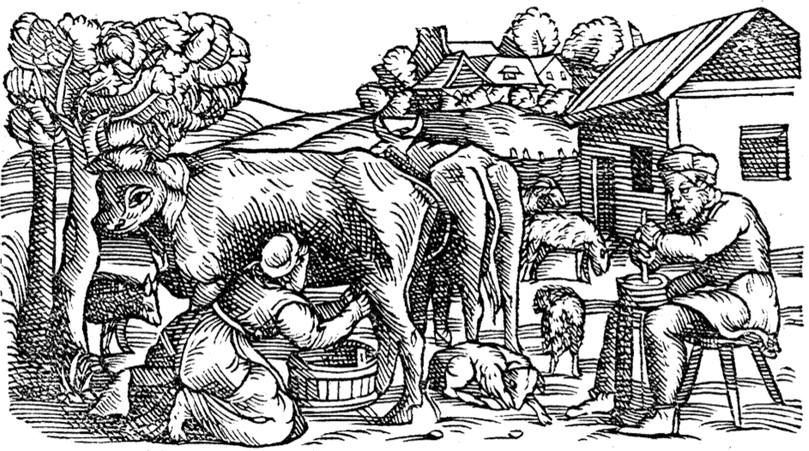 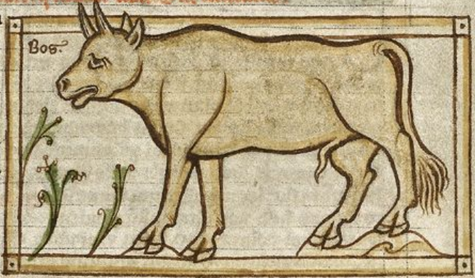 Temperature & Taste:
Cool, dry
Uses:
BILE: ‘The best of all Beasts’
1. Clears Heat, Alleviate Thirst:
-Convulsions from Liver heat (TCM).
-Cow bile is specific for Hysteria, Convulsions and other Spasmodic diseases (Ayurveda)
-has been used similarly for Epilepsy in Europe.

3. Clears Heat, Moves the Bowels:
-Bulls Bile was applied to the navel or anus for constipation and to evacuate the bowels;
-'And the Gall by itself applied either to the arse or navel, evacuates the belly more than a clyster’ (Magic of Kirani).
-Dysentery, Jaundice;
-a plaster of it applied to the belly was used for Worms.

4. Benefits Digestion:
-Bile mixed with Honey ‘perfectly cures a bad stomach’ (Magic of Kirani).
-purified Bile has been used for indigestion in modern times; it promotes the flow of bile; it has also been used as an intestinal antiseptic
and purgative. (West, TCM, Modern)

6. Abortifacient:
-It has been used for Abortion in India.

7. Externally:
i. Dropped into the ear for Deafness, Tinnitus, and Earache (mixed with Milk, Butter, or Oil and dropped in).
ii. topically for back pain. (mixed with alcohol and applied; Salmon, Schroder)
iii. Piles.
iv. Mixed with vinegar it  ‘cures the Black Leprosy, and Dandruff in the head, Knits, and Moles and Freckles in women, which they are troubled with because they are with child’.
v. also used in pessaries to promote Menstruation the same day. (Magic of Kirani).
vi. Fistulas, applied with vinegar
vii. Ulcers, Abscesses
Dose: 300mg–1 gram


BLADDER:
Good for incontinence, and excessive urination. (Cardanus, others)

BLOOD of a CALF or BULL:
1. internally for Dysentery and all Fluxes.
2. Externally:
i. softens Tumors
ii. take away Freckles (Schroder)
iii. Anointed on with oil is an old recipe to prevent the hair from turning grey (Magic of Kirani).

BLOOD: COWS:
-Used for all types of bleeding, including spitting blood. (Salmon)

CARTILAGE:
1. It has been promoted as having the same effects as Shark Cartilage, and has been used as a substitute for it; Used as a immune stimulant.
2. Chondroitin (a mucopolysaccharide found in mammalian Cartilage) has been used for ischaemic Heart disease.

FAT:
1. Softens the nerves; also to soften and mollify in Gout and Schirrhus. (Schroder)
2. Heals ulcers including those of the Lips, Clefts. (Schroder)

FLESH: BEEF (Cool, Sweet, Oily):
1. Strengthens the Spleen, Benefits the Qi:
-digestive weakness with deficiency (TCM);
-‘Beef is an excellent Meat’. (Culpeper)
2. Nourishes the Yin and Blood, Strengthens the Bones and Joints:
-chronic illness and wasting diseases including Diabetes, emaciation, and for general weakness.
-good for pain and deficiency of the lower back and knees, and Dizziness from Yin and Yang deficiency (TCM).
-in broths to restore in Consumption (Salmon)
-Buffalo Meat is said to increase ‘Sleep, Virility, Strength, and Milk, and makes Flesh firm’ (Ayurveda).
3. Calms Wind:
-used for Wind Fever and Irregular Fevers. (Ayurveda, Tibetan)

GENITALS: PENIS and TESTES (dried, preferably fromı a Red Bull. Warm, dry):
1. Warms and Strengthens the Kidneys (TCM, West):
-male aphrodisiac, and to strengthen the sexual function
-Kidney weakness with lower back pain or weakness, and urethral discharge.
-Salmon said the Powdered Penis of a Bull was good for Dysentery.
-promotes mental alertness and vitality; have a rejuvenating effect on the aging male system (Cell Therapists)
2. The ashes were given for Pleurisy. (Riverius)
3. ‘The spermatic vessels burnt with the Stones [testicles], stops bleeding. Note. This is the Jews remedy after Circumcision’. (Schroder)
Dose: 1–1.5 grams in powder; 3–9 grams in decoction (best to decoct in wine)

HOOF (from dark animals; Calf is best. Ashed; or as a gelatin):
1. Leukorrhea and uterine discharge. (TCM)
2. Used for Convulsions (West): Various hooves were used for Epilepsy and Convulsions in the West.
3. Nourishes Yin:
-Coughs and consumption
-restorative after chronic diseases such as rheumatism
-‘And when there is a stabbing disease in the limbs or joints, or Stomach ache, boil the feet and eat sufficiently of them’ (Hildegard)
4. ‘Hooves of the forefeet’ were used to increase Milk (often ashed, but they can be ‘taken any way’) (Salmon, Culpeper)
5. ‘Cows Hoof boiled and eaten with Vinegar resists all poison’ (Magic of Kirani); the Hoof was used similarly to the Horn in the West.
6. The smoke drives away Mice. (Culpeper)

HORN: COW (Cool):
1. Falling Sickness (West).
2. fumes of burning Cow horn have been used in Ayurveda against all sorts of Insanity.
3. Ashed, it is taken with honey for coughs and consumption of the Lungs. (West)
4. The fumes were also used to fumigate Pestilential air. (The Hoof may be used similarly) (Salmon)
5. The Tip of a Cows horn was used to clear obstruction of the blood and blood stasis which causes pain; it was also used for vaginal discharge and uterine bleeding in females. (TCM)

LIVER (Calf or Beef are preferred) (TCM, West):
1. Tonifies the Liver and Blood, Benefits the Eyesight:
-'Eating the (Cow's) Liver strengthens you because of its good nature' (Hildegard);
-Liver and Blood deficiency; used for blood deficient headaches, palpitations or dizziness from blood and Qi deficiency, or Yin and Yang deficiency.
-Bloody Fluxes (ashes or Salts).
-Liver broth or Liver juice has been used in blood weakness and anemia.
-Cell therapists used Liver cells to help improve the quality of the blood, and for toxemia.
-Calf Liver is best to Nourish, as was noted by Schroder (TCM, West)
2. Benefits Eyesight:
-poor vision, night-blindness, glaucoma, as well as Optic nerve atrophy (TCM);
-Ancient Egyptians roasted and powdered the Liver of an Ox and gave it against Night-blindness
3. Desiccated Liver is a mild diuretic.

MARROW; OX, BULL, or BUFFALO (Purified, or the Extract):
1. Strengthens the Kidneys and Bones:
-given for fractures;
-In the 1960’s, extracts were promoted for osteoarthritis and deforming osteoarthrosis.
-It is also a Kidney tonic and aphrodisiac. (TCM)
2. Nourish the Blood and Yin:
-extract has been given for pernicious anemia, chlorosis, scurvy, purpura, hemophilia, debility, rickets, splenic leucocythemia, hemoglobinuria, as well as general wasting or debility. (Cell Therapists)
3. Improves inspiration (by strengthening the Kidney) (TCM)
4. Applied (with wine) to trembling and palsy. (West)

MARROW; CALF:
'Softens hard tumours, and schirrus, hardness in the muscles, tendons or Ligaments, and is the best next to that of a Deer'. (Salmon)

ORGANS (Heart, Liver and Lungs of a Calf):
1. Nourish the Blood and Yin:
-The Distilled Water or Decoction was given for emaciation, debility, consumption and paralysis of the extremities. The Compound Distilled Water was an official preparation of the 18th Century Dispensatories, and its compound form comprised herbs such as Rosemary, Lavender, Cinnamon, and Pepper.

SPLEEN:
1. Strengthens the Spleen:
-A Spleen tonic; for sluggish bowels from Spleen weakness (TCM)
-hardness and swelling of the Spleen. (West)
2. Nourishes Blood:
-Cell therapists used Spleen cells to help improve the quality of the blood;
-Toxic conditions and poisoning (with liver cells), to promote formation of antibodies in infections and to promote resistance to Infection -promote the healing of old wounds;
-desensitise allergic conditions such as chronic asthma, hay fever, urticaria, abdominal swellings, dermatitis, and gastric or duodenal ulcers.
-benefical in anemia.
3. Promotes menstruation (It was taken in broth; other herbs may be added).
4. Externally, it is mixed with Honey and applied to running ulcers. (Salmon)

STONES:
-from a cows bladder are good against kidney or bladder stones.

TESTES (Defatted and dried):
1. Warms and Strengthens the Kidneys:
-Impotence, Prostatic hypertrophy, Sexual Neurosis (Merc, Squires, Cell Therapists)
-nervous tonic (Squires).
-boys with slow or deficient development, bedwetting or ‘effeminate development’ (Cell Therapists).
-inferiority complexes, shyness
2. Nourishes Blood:
-Cell therapists gave Testes for poor circulation, arteriosclerosis, angina pectoris, heart disorders; also chronic pulsating headaches, dizziness, congestion, insomnia, some skin diseases, and the male climacteric with such symptoms as poor libido, prostate disorders etc.
3. The gonads were used in Cell therapy for Diabetes caused by overactivity of the pituitary and supra-renal glands or underactivity of the gonads.
4. ‘According to Niehans, they [testes] have been proved to be a prophylaxis for Cancer-endangered patients and to retard its development’.
5. Neurasthenia, melancholy and senility (used for these conditions related to kidney deficiency).
Dose: 500mg–2 grams of the dried powder

Cautions:
MEAT:
1. ‘Beef is an excellent Meat, if the beast be Young, and is not Cow-flesh; for Old Beef and Cow-flesh do engender Melancholy and Gross Humours’. (Culpeper)
2. Ayurveda believes Beef flesh to dull the mind and reduce compassion (in excess), and to aggravate toxic blood.
LIVER:
1. Due to the large amount of preformed Vitamin A in calf Liver, daily dosage should be limited to about 40-50 grams, or around 200 grams weekly.
2. Pregnant women should not eat Calf (or other animal) Liver to prevent high Vitamin A levels.
BILE:
1. Bile salts must be used carefully, as Bile salts which are reabsorbed by the intestines may inhibit formation of bile by the Liver. This is partly why Tibetan formulas often combine a saline purgative when Bile salts are added to formulas.