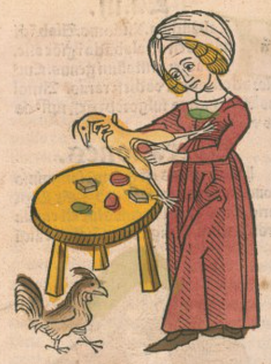 Aldrovandi, Musaeum metallicum, 1648
History
A stone from a Cock, bright, transparent, as white as Crystal, sometimes with pink veins. Taken from the Gizzard or Liver from a gelded Cock after 3 or 6 years. The best came from a cock castrated in its third year, and to kill the capon in its 7th year, or older. When the bird did not wish to drink as he ate, the stone was judged to be ready.

Albertus said ‘It maketh the belly pleasant and steadfast, and put under the tongue, it quenches thirst’. Further, in his Animalia, ‘A Capon is a Cock that is castrated and effeminate ... It is said that after 6 years a stone named Electorius grows in its Liver, and from that time onwards the Capon does not drink. And therefore a man who wears this stone is said not to get thirsty’.

Lemnius said ‘there is a stone of the biggness of a bean found in the Gizzard of an Old cock, which makes him that bears it beloved, constant and bold, valiant in fighting, beloved by women, potent in the sports of Venus’.

Culpeper said ‘Cock stones nourish mightily, and refresh and restore such bodies as have been wasted by long sickness, they are admirable good in Hectic fevers, and Marasmus, which is a consumption attending upon a Hectic fever; they increase seed, and help such as are weak in the sports of Venus’;

This was said to make the bearer invincible in battle, and many Gladiators were said to have praised this stone for their win when held in their mouth. Milo of Crotona, a recorded 6 time winner at the ancient Olympics, used this stone every time he wrestled. The Romans believed the stone gave the power of invisibility. It was also recommended for wives to cause strong desire and excitement in their husbands. It was said to give eloquence when held under the tongue, and gave the powers of persuasion and victory.
© MedicineTradition 2015–2023