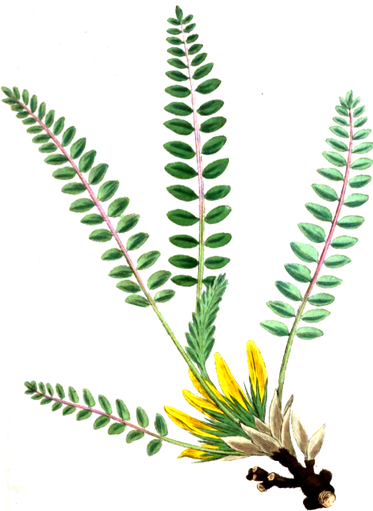 Astragalus Huang Qi is an important tonic medicine in TCM. It is derived primarily from A. membranaceus and A. membranaceus var. mongholicus, although there are a number of local species used including A. ernestii, A. monadelphus, A. floridus, A. chrysopterus and others.

It supplements Qi, and increases immunity for which purpose its use has become popular in the West in the past couple of decades. It is of the same genus that supplies Tragacanth, the gum of various species of Astragalus from the Middle East, but until now it has not been noticed that there is a species of European Astragalus whose root was used as a tonic in decoction form, similarly to Huang Qi.

This and other species of western Astragalus are used for the following conditions:
1. Chronic skin diseases, Syphilis
2. Diuretic in Edema
3. Joint disease, Rheumatism, Sciatica


Explanation of Effects
To put this in context, Astragalus Huang Qi is regarded as having a special effect on the skin. It enhances the initial protection (Wei Qi) which is active throughout the skin. This same effect can help promote sweat to through off a cold or flu, can strengthen it to prevent attack (increase immunity) and regulate it to prevent excess or spontaneous sweating.

Astragalus Huang Qi is well known for its immune-enhancing effects which makes it of use in various chronic diseases, and this can explain the western varieties being used for Syphilis and skin diseases. It is worth noting that some classical TCM texts said it 'transports toxicity [out of the body]' (Bensky). All the listed Astragalus species including Huang Qi are emollient and demulcent (partly due to the gum, but also saponin content).

Both Eastern and Western varieties are found to be Diuretic. It strengthens the Kidney function and improves diuresis to pass of fluid and damp, and this is implicated it the Western use for Rheumatism. Astragalus Huang Qi appears in some TCM formulas for similar conditions, particularly when there is general weakness and spleen deficiency.

The tonic effects are not as noted in the Western Tradition, and this is typical. The organisation of the Tonic Materia Medica in TCM is quite unique and is not as readily seen in the Western Tradition. However, the text below notes that the decoction is sweet like Licorice. Further, the use in chronic disease like Rheumatism and Syphilis always hints at some tonic properties, as strengthening the patient in chronic illness is always a priority of treatment.

One anomaly is the use to promote Breast Milk noted for various Western species. This is quite possibly related to lack of Milk in deficiency, as Huang Qi can also be useful in such instances. In fact, Huang Qi is useful as a postpartum tonic in deficiency, lack of milk or postpartum fever. It will be noted several western species are indicated to stimulate labor, again being useful in deficient conditions.


From Medical Botany (Woodville, Vol. III, 1810):
It has been used in France and Ukraine for syphilis, rheumatism, skin disorders, joint pain, and as a diuretic in Edema and as a diaphoretic. (Lysiuk)

The indications, while not identical to Astragalus Huang Qi, certainly show similar features. The fact that the decoction tastes sweet like Licorice supports this being a Qi tonic as for both Licorice and Astragalus Huang Qi. In addition, the constituents throughout the genus seem to be fairly similar, saponins, flavonoids and polysaccharides being common constituents, along with greater or lesser amounts of gum Tragacanth.

1. For Blood and Skin diseases:

This is boiled in a quart (approx. 1 liter) of water for 15 minutes, the strain. Boil again in 1 pint (approx half liter) of water again for 5 minutes, strain. Mix the 2 decoctions, and when cold, add the juice of half a lemon. Take a wine-glassful three times daily. (Valuable Herbal Prescriptions, late 1800's)

2. Indigestion:
'The following with many people is wonderful in counteracting acid and creating assimilation of the food, in numerous instances digesting food as if by magic ; it is also possessed of great cleansing properties, is sweet, pleasant to the taste, and feeds the constitution ; a wine-glassful is more beneficial than the same quantity of port wine, and can be taken easily by people who do not like medicines of a bitter nature'.

Boil in a quart down to a pint, then boil again in a pint of water for 15 minutes, strain; add the 2 decoctions together. Take a wineglassful three times daily.

Other Medicinal Species of Astragalus:

Tragacanth
The following species are important sources of Gum Tragacanth.
A. tragacanthus, A. verus, A. gummifer, A. ascendens, A. brachycalyx, A. creticus, and various others have supplied Gum Tragacanth, used as a Yin and Qi tonic. Gum Tragacanth is a constituent of Astragalus Huang Qi and is at least partly responsible for many of its effects. It is rich in polysaccharides.


The following Roots of Astragalus species have been used with properties somewhat similar to Astragalus Huang Qi:

However, it has been widely overlooked that there is in fact medicinal Astragalus species whose root has been used similarly to Astraglaus Huang Qi in TCM. Further, description of its taste, similarity of basic constituents and uses suggest some western species could be acceptable substitutes or anologues for Astragalus Huang Qi used in TCM.


Bibliography and Further Reading:
–Bensky, Chinese Herbal Medicine, Materia Medica, 3Ed. 2004
–A Dictionary of Medical Sciences, Dunglison, 1893
–Observation on the Effects of Various Articles of the Materia Medica, Pearson, 1807
–Crichton, An Account of the Effects of the Astragalus Exscapus Linn. In the Cure of the Venereal Disease, London Med J, 1788
–A Supplement to the Pharmacopoeia, Gray, 1821
–Lysiuk, Pharmacology and Ethnomedicine of the Genus Astragalus, International Journal of Pharmacology, Phytochemistry and Ethnomedicine, 06, 2016
–Valuable Herbal Prescriptions, late 1800's (author and exact date uncertain)
You may also Like:
38 obsolete Western Medicine with Chinese equivalents
Chinese Medicines used in the West before TCM
Chinese Medicine in European Texts
© MedicineTradition 2015–2022