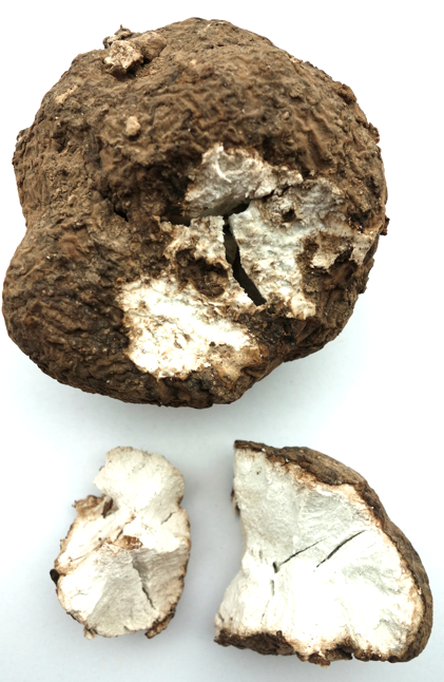 Parts used:
Sclerotium; Poria is a subterranean fungus that grows on the roots of Pine trees.

2. Benefits the Spleen and Stomach:
-fatigue and weakness, poor appetite and indigestion
-diarrhea and loose stool associated with Damp

NOTE:
Three other medicines can be included under Poria:
1. Poria Skin (Fu Ling Pi): this is a stronger diuretic than Poria, but less strengthening
2. Root Poria (Fu Shen): center of the fungus with the attached root of the tree it is growing on. It has a stronger effect of calming the Mind and Spirit, and settling the Heart.
3. Red Poria (Chi Fu Ling): the portion of the fungus closer to the skin is purplish-red, and is known as Red Poria (Chi Fu Ling). It clears Heat and Damp and is mainly used for scanty or difficult urination. It is not tonifying and doesn't settle the Heart.
4. Traditionally, Poria Fu Ling was sometimes prepared with Cinnabar to increase the effect of calming the mind and spirit. Because of the toxicity of Cinnabar, this is rarely used in modern China and is not appropriate for use in the West.

SUBSTITUTE:
1. Polyporus Zhu Ling is considered very similar in effect. It lacks the tonic properties of Poria Fu Ling, but is more effective an a diuretic..
2. Phlomis tuberosa is used as a substitute for Poria Fu Ling in Tibetan Medicine.
3. For thick Phlegm and Phlegm and Damp Masses and Tumors, Agaric (Fomitopsis officinalis) may be used and is more effective.

1. Poria Fu Ling is often combined with Pinellia Ban Xia. Poria is better for thin Damp and strengthens the Spleen while Pinellia is better for thick Phlegm. When combined, they form a powerful combination for all Cold-Phlegm-Damp conditions. This is the flag-ship formula for these conditions in TCM, and when combined with Tangerine/Orange peel (Ju Hong/Chen Pi) and Licorice root, it forms Er Chen Tang [Two-Cured Decoction]).
2. Nausea and vomiting from Cold-Damp-Phlegm, combined with Pinellia Ban Xia and fresh Ginger
3. To promote urine and clear Damp, with Water Plantain root (Alisma Ze Xie).
4. Edema from Kidney Yang deficiency (marked Coldness), combine with Atracylodes Bai Zhu and Aconitum Fu Zi (as in Zhen Wu Tang [True Warrior Decoction)
5. For Internal Dampness with a sense of heaviness, lethargy and scanty or painful urine, with Cinnamon twig Gui Zhi and Atractylodes Bai Zhu.
6. For fatigue and weakness, poor appetite, loose stool and indigestion, with Ginseng (or Codonopsis Dang Shen) and Atractylodes Bai Zhu.
7. Diarrhea from excess Damp, with Costus
8. Palpitation and shortness of breath from Heart deficiency, with Licorice and Cinnamon
9. Palpitations, Insomnia, Restlessness, poor Memory, with Calamus

Cautions:
Generally Safe.
1. Avoid in marked Yin deficiency unless corrected (as in Liu Wei Di Huang Wan)
2. Older TCM texts said it should not be used in dribbling urine or incontinence from Kidney weakness, or urinary difficulty from Yin deficiency.