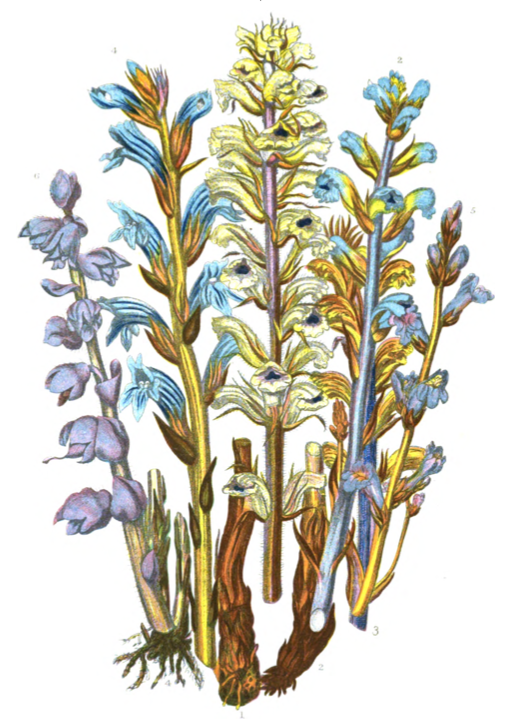 5. Externally:
-Fresh Wounds, Old and Malignant Ulcers (fresh juice)
-triple-infused oil or juice is applied to remove all skin-spots, sun-spots, freckles and marks
-as an ointment (with lard) to resolve all hard swellings of the body
-topically to Toothache
-Burns (Tibetan Medicine)

NOTE:
1. Orobanche (Broomrape) is similar to 2 medicines used in TCM; Cistanche Rou Cong Rong (which is also known as Broomrape) and Cynomorium Suo Yang. All are parasitic, growing on the roots of various plants. The two species used in Chinese Medicine are similar in effect, both regarded as Yang tonics which also nourish the Essence and Blood. In addition, they have a gentle laxative effect. While there is little indication for the tonic use of Orobanche in the West, its use in Kidney disorders and to open obstructions suggests similar effects. In addition, in Tibetan Medicine Orobanche is used to warm the Kidneys, treating Impotence, Kidney and Lower back pain, and to strengthen the Back and Joints (Drungtso). This suggests Orobanche can be used similarly to its Eastern relatives.
2. Gerard and others noted some of the Satyrions (Orchid spp.) and Orobanche were very similar in appearance. Satyrions were highly regarded as Kidney tonics and Aphrodisiacs in the west.

ANTI-INFLAMMATORY
–In vivo anti-inflammatory and hepatoprotective activities of Orobanche crenata (Forssk.) aerial parts in relation to its phytomolecules.

IMMUNOSTIMULATING
–[Pharmacodynamic effects of the extracts from Orobanche cumana].

HEPATOPROTECTIVE
–In vivo anti-inflammatory and hepatoprotective activities of Orobanche crenata (Forssk.) aerial parts in relation to its phytomolecules.

ANTI-FATIGUE
–[Pharmacodynamic effects of the extracts from Orobanche cumana].

ANDROGENIC
–The genus Orobanche as food and medicine: An ethnopharmacological review.