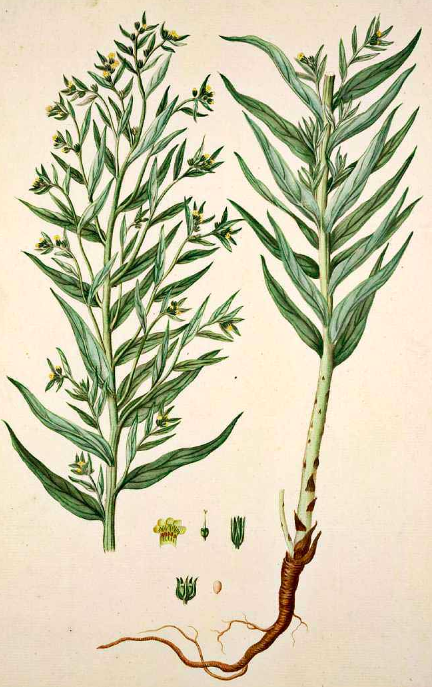 Classification:
B. Clears Heat, Cools the Blood
Uses:
1. Clears Damp, Promotes Urine, Clears Stones: (West, TCM)
-Edema, Dysuria, Strangury
-Gravel and Stones (Seed especially)
-also Back Pain and Arthritis
-Seed decocted in Wine is best for these functions
-this is a primary indication in the West, but is also used in TCM

DOSE:
Of the Juice: 1–2 oz. were given in Wine.
Of the Seed in Powder: 1–3 grams;
-for Stones, 3 grams of the Powder in wine or emulsion of Cold Seeds.
-to promote Delivery in Labor, 4–6 grams of the Seed powder taken in Woman's Milk, White Wine or Parsley Water. (Salmon)

COMMENT:
1. TCM uses the root of a Gromwell species, L. erythrorhizon Zi Cao (which is regarded by some as a subspecies of L. officinale). It cools the Blood, clears Heat and Toxin and is primarily used to promote the expression of rashes such as Measles and Chicken Pox. It is also used for urinary dysfunction and Damp-Heat Leukorrhea. The Western and Eastern species are closely related and similar in appearance. The Western species is primarily used for Urinary disorders and the Chinese species for Skin rashes, but they are probably fairly synonymous.
2. Arnebia species are used as Zi Cao in some parts of China. They are also used in Tibetan Medicine (A. euchroma is called 'Bri mog འབྲི་མོག་, A. guttata is called 'Bri rdzud འབྲི་རྫུད་) where they are mainly used for bleeding from the Lungs and increase of 'unhealthy Blood'.

Cautions:
1. Avoid overdose or long–term use. Contains pyrrolizidine alkaloids.
2. Not used in those with loose stool (TCM)
3. Has an anti-fertility effect.