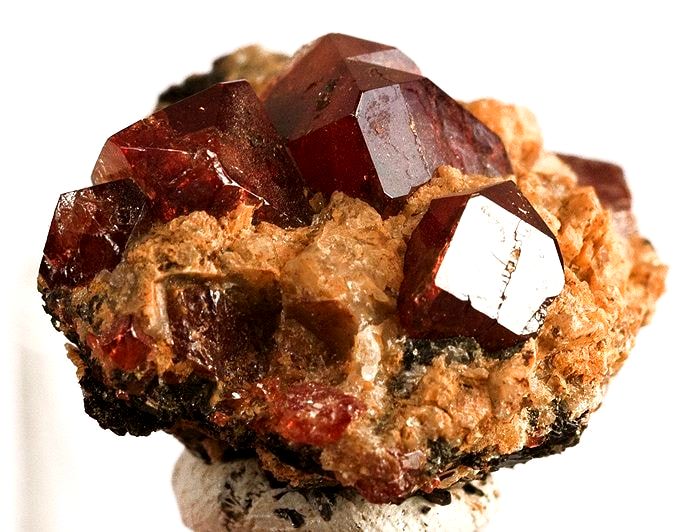 Culpeper said ‘there are 2 kinds, red, which is best; the other like a Carbuncle, which is presently changed by the Fire, and of a small bigness’.
Schroder said ‘some are like Natural Minium, or Cholerick Blood, these are the best. Some are yellow like Saffron, others like Amber, and these are cheaper’.

Properties:
Hardness: 7.5.
Specific Gravity: 4-4.86:
Luminescence: Yellow, Orange, Dull Red, or Green-yellow.
Of the Tetragonal crystalline system and in the form of prisms, isometric or di-pyramidal crystalline forms.
Often slightly radioactive due to the presence of Uranium and Thorium; Zircons are often found in a Metamict state (meaning the crystalline structure has been changed or destroyed due to the radioactive emanation from Uranium and Thorium).
Partly soluble in HF and HCl.

Constituents:
Zirconium oxide (ZrSiO4)
Common admixtures include aluminium, phosphorus, iron
It can contain various rare earths including hafnium, thorium, uranium
Uses:
1. Benefits the Mind, Calms the Heart and Spirits:
-‘The Hyacinth has the virtue of promoting sleep ... it raises the Spirits of men and it fortifies the Heart’ (Lexicon of Alchemy, Rulundus);
-‘beaten into Powder, and so taken inwardly ... it provoketh sleep, and increases Honour and Wisdom’ (Culpeper)
-Leonardus said it brought sleep to the tired brain, and gave Wisdom
-‘Gives Wealth, Joy, and Good Spirit’ (Albertus).
-Bewitchment and Insanity; Manic Depression
-said to strengthen the mind against all sorts of temptation, and to be ‘very comfortable for the body’.
-'held in the mouth, it wonderfully cheers the Heart and Strengthens the Mind'. (Francis Barret)
-Ancient Greeks held this to strengthen the Mind and Gladden the Heart and Spirit.
-Nervousness, Depression, Suicidal Tendencies. (Worn or taken internally). (Ayurveda)

4. Used for Hernia:
-Taken with vinegar for Ruptures (Hernias, etc).

Preparation:
1. As Zircon is a very hard stone it must be thoroughly prepared. It can be heated to red and quanched a number of times until friable, then levigated with a distileld water such as Rose Water.
2. It can also be formed into Bhasma, which ensures it is fully reduced.
3. Later preparations in the wesst used acids.

Magical Uses:
-worn to increase Riches, Honor and Wisdom.
-cheers the Heart and Spirits, promotes Sleep
-renders the wearer pleasant and acceptable
-protects during Epidemics, Plagues, and from Thunder.
-‘If any one be infected with the Plague which wears it, it straight away loses its color’ (Salmon)
-Wearing Jacinth was said to make strangers welcome by their guests

Cautions:
1. Standard cautions for using Gem stones.
2. Zircon often contains traces of radioactive elements. These are usually in trace amounts and would not pose a threat with the small doses traditionally used. Some mineral waters (such as Baden Baden in Germany) are still drunk for their health benefits and also contain traces of similar radioactive elements. As stated above, Zircons in a metamict state will most likely have higher levels of radioactivity.

Toxicity:
No adverse effects were noted when zircon was administered to rabbits. (see here)