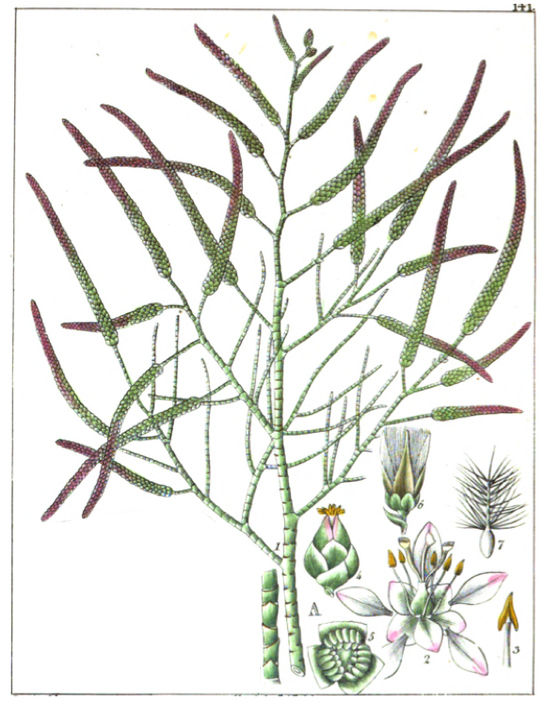 Parts used:
Wood; Root-bark; Leaf; Seed. Tamarisk is also used as a source of Galls (Taknut Galls)
The Bark is most commonly used

DOSE:
Of the LEAVES and TWIGS in DECOCTION: 3–6 grams.
Of the LEAF ASHES: 5 grams (Unani)
TINCTURE: 1–2 drams (Salmon)
EXTRACT: half–1 dram
SALINE TINCTURE: 2–3 drams (this being best to open obstructions)

Main Preparations used:
Extract of the Bark, Salt from the ashes of the Wood
ADVERTISEMENT:
History
Pliny on Tamarisk:
1. T. gallica:

'Lenaeus says, that the myrice, otherwise known as the "erica," is a similar plant to that of which brooms are made at Ameria. He states also that, boiled in wine and then beaten up and applied with honey, it heals carcinomatous sores. I would here remark, parenthetically, that some persons identify it with the tamarice. Be this as it may, it is particularly useful for affections of the spleen, the juice of it being extracted for the purpose, and taken in wine; indeed so marvellous, they say, is its antipathy to this part of the viscera, and this only, that if swine drink from troughs made of this wood, they will be found to lose the spleen. Hence it is that in maladies of the spleen victuals and drink are given to the patient in vessels made of this wood.
'A medical author too, of high repute, has asserted that a sprig broken from off this tree, without being allowed to touch the earth or iron, will allay pains in the bowels, if applied to the body, and kept close to it by the clothes and girdle. The common people, as already stated, look upon this tree as ill-omened, because it bears no fruit, and is never propagated from seed.'

2. T. orientalis:
'At Corinth, and in the vicinity of that city, the Greeks give the name of " brya" to a plant of which there are two varieties; the wild brya, which is altogether barren, and the cultivated one. This last, when found in Syria and Egypt, produces a ligneous fruit, somewhat larger than a gall-nut, in great abundance, and of an acrid flavour; medical men employ it as a substitute for galls in the compositions known as "antherae." The wood also, with the blossoms, leaves, and bark of the tree, is used for similar purposes, but their properties are not so strongly developed. The bark is pounded also, and given for discharges of blood from the mouth, irregularities of the catatnenia, and coaliac affections : beaten up and applied to the part affected, it checks the increase of all kinds of abscesses.
'The juice too is extracted from the leaves for similar purposes, and a decoction is made of them in wine; they are applied also to gangrenes, in combination with honey. A decoction of them taken in wine, or the leaves themselves applied with oil of roses and wax, has a sedative effect: it is in this form that they are used for the cure of epinyctis. This decoction is useful also for tooth-ache or earache, and the root is employed for similar purposes. The leaves too have this additional use— they are applied with polenta to serpiginous sores. The seed, in doses of one drachma, is administered in drink for injuries inflicted by spiders or the phalangium; and mixed with the grease of poultry, it is applied to boils. It is very efficacious also for stings inflicted by all kinds of serpents, the asp excepted. The decoction, used as a fomentation, is curative of jaundice, phthiriasis, and lice; it also arrests the catamenia when in excess. The ashes of the tree are employed for all these purposes; there is a story told, too, that, mixed with the urine of an ox, and taken in the food or drink, they will act most effectually as an antaphrodisiac. The charcoal too of this wood is quenched in urine of a similar nature, and kept in a shady spot. When it is the intention of the party to rekindle the flames of desire, it is set on fire again. The magicians say, that the urine of an eunuch will have a similar effect. (The Natural History of Pliny, trans. by Bostock and Riley, Vol. 5, 1856)
Vegetable Materia Medica of Western India, Dymock, 1885
Copyright © 2015–2020