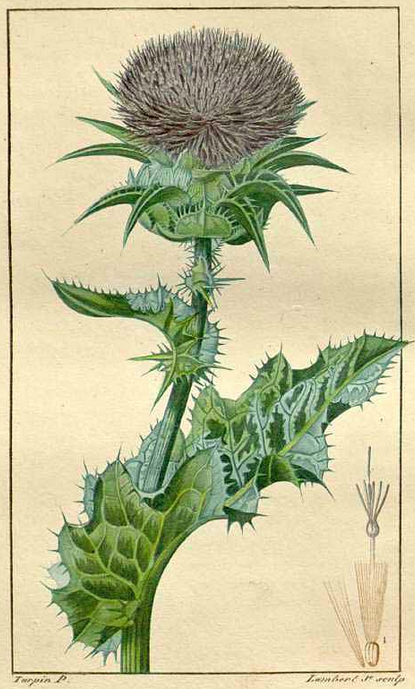 2. Clears Heat, Resists Poison:
-against Poison and Venom
-boiled up in the Spring as a Blood cleanser
-Eczema, Acne, Psoriasis
-prevent and cure the infection of the Plague
-Fever; 'High Fever' (Haller, Lexicon, 1755)
-seeds were traditionally used for Hydrophobia.

5. Moves the Blood, Clears Stasis:
-Varicose veins and poor venous circulation of the lower body
-enlarged or varicose veins of the legs due to engorgement of the Spleen

7. Clears Melancholy:
-Some old authors claimed it to be one of the best medicines for Melancholy.

8. Externally:
i. applied to Ulcers, including Varicose Ulcers and Rodent Ulcers
ii. also applied to Swellings, Tumors and Cancers. The strong seed decoction has been applied to Cancers with benefit.
iii. as a gargle for Toothache

SUBSTITUTE:
Used similarly to Carduus Benedictus. Carduus was more highly regarded in the past.