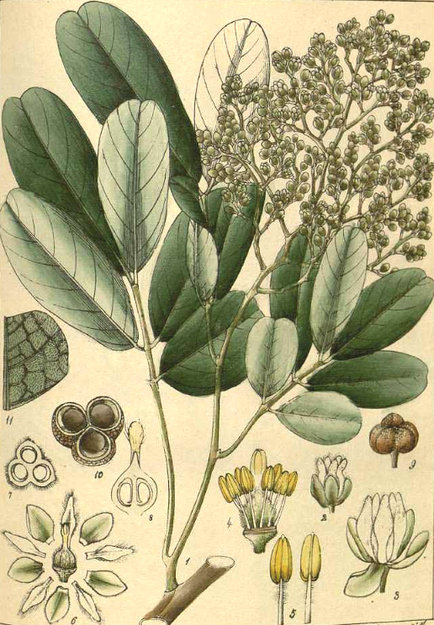 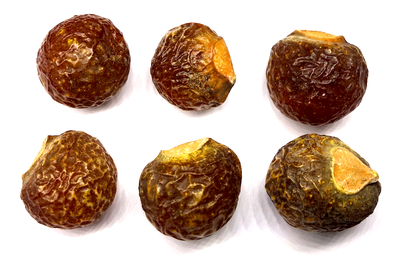 Parts used:
Pericarp of the Fruit; sometimes the kernel

5. Purgative:
-used as a purgative in full doses
-'Soap-nut evacuates black bile, phlegm, yellow bile and other fluids from the body without any ill effects'. (Avicenna)
-full doses can also be Emetic

6. Settles Wind, Stops Spasms:
-Spasms, Convulsions, Epilepsy (Unani)
-Hysteria
-the suds put into the mouth during a fit of Epilepsy is said to restore them instantly (Ainslie)

7. Kills Worms:
-used for Worms; Ascaridia
-as a wash for Lice

8. Externally:
-decoction used topically for ear ache (Thailand)
-as a collyrium to Cataracts
-as a wash for Pruritus of the skin, Rashes, Ringworm, Tinea (Avicenna)
-Leucoderma (Vitiligo)
-strong decoction for Lice
-decoction is used as a hair wash and shampoo
-powder mixed with vinegar and applied to beautify the skin
-mixed with vinegar and applied to Ulcers
-used as a snuff to promote sneezing in sinusitis; also for Headache, Epilepsy, Facial Paralysis etc. (Unani, Avicenna)
-as a snuff for Mania and Melancholy (Avicenna)
-gargle is very effective for Diphtheria (Unani)
-painted on with Vinegar to Scrofula (Avicenna)
-fumigation in Melancholy and Hysteria

DOSE:
1. Full doses are emetic and purgative; small doses are expectorant
2. Avicenna said it is taken with Sweet Wine or Oxymel.
250mg is used for Colic
500mg–1 gram is expectorant
3–6 grams in powder is purgative
Infused in Wine or Oxymel: 3–7 grams (to be sipped)
Main Combinations:
1. As a purgative, Avicenna said it was taken with Scammony and other ingredients.
2. Hemorrhoids, Sapindus fruit (kernel removed), Tragacanth (equal parts). Form pills and take one as big as a Chickpea. (Unani)
2 Diabetes:
i. Sapindus fruit (kernel removed), Tragacanth, Zinc Kushta (Bhasma). (Unani)
ii. Sapindus fruit with Tin Bhasma
3. Spermatorrhea, Sperm tonic, premature ejaculation, Sapindus fruit with Tin Bhasma
4. Hyperlipidemia, Sapindus fruit (kernel removed), Fenugreek seed, Plantain seed (proven effective)
5. Facial Paralysis: Avicenna stated 'It has been successfully tested as a useful drug for facial paralysis when taken as a snuff for three consequent days. This treatment enables the fluid and phlegm to flow out profusely from the nostrils and the disease is cured within three days. During this process the patient of facial paralysis must be confined to a dark place'.
6. Keratitis, Day-blindness: ''The extract of the small soap nut, if sniffed with the water of sweet marjorum, is particularly useful in vascular keratitis and day-blindness'. (Avicenna)
5. Rabies, Fruit powder made into pills with Neem oil for someone bitten by a Rabid animal (Folk Medicine)
6. Worms, Sapindus with Pongamia and Butea
7. As a hair tonic, make a wash of Sapindus with Emblic Myrobalan (Ayurveda)