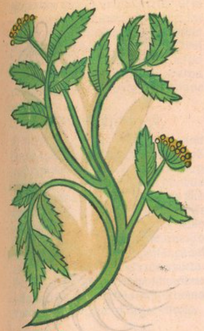 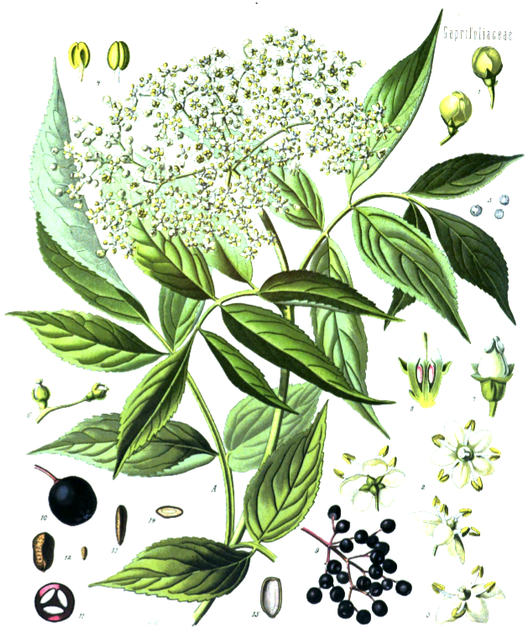 5. Externally:
-Elder Flower Water was much used for the skin as a cosmetic
-flowers were used in preparations for Erysipelas, Burns and Scalds.
-various skin inflammations
-Mouth Ulcers (as a gargle).

2. Clears Phlegm, Stops Cough and Wheezing:
-Wine of Elder berries has been used for Asthma, especially when a little Cinnamon is added.
-Throat pain

4. Moves the Bowels:
-Syrup of the Fruit is used as a mild Laxative

6. Externally:
-juice or other preparations of the berries were much used as a folk remedy for burns and scalds in some parts; also for various skin diseases
-berry juice is applied to Warts (Culpeper)
-Eye diseases; it has been credited with restoring sight to the blind in some cases (esp. berries, both internally and externally).
-juice of the Berries boiled with honey is dropped into ears for for earache.
-fresh berries crushed and applied relieves Arthritic pain (Herbarium Horstianum, 1630)

2. Clears Wind-Heat, Promotes Sweat:
-can be used as the flower, but the flowers are preferred
-Tertian and Quartan Fevers

4. Externally:
-fresh leaves beaten with tallow or Goose fat is applied to hot swellings and tumors
-Scalds, Burns
-Arthritic or Gout pain
-Leaves of the TCM type are used for Urticaria, and in baths or washes for carbuncles, Tumors and painful swellings.


BARK of ROOT or TREE:
1. Clears Wind and Damp, Eases Pain:
-both leaves and bark have been used for Wind-Damp joint disorders including Arthralgia and Lumbago
-strong infusions of the leaf buds have also been used for joint pain and Gout.
-Related species are used for Rheumatic Arthralgia. (Leaves, leaf-buds, root-bark)

2. Clears Damp, Promotes Urine:
-promotes Urine; good for all watery humors, and said to be the best cure for Edema
-cardiac and renal Edema (Bark is strongest; leaf buds are next in strength, then the leaves)
-Jaundice.

4. Clears Heat and Phlegm:
-Epilepsy and Cachexia with heat and damp symptoms.
-clear the skin; for the Itch, Ringworm, Eczema and and Scrofula for which it is used internally and externally;

PREPARATION:
The seed was steeped in Vinegar, then dried for use.

Cautions:
1. Berries and Flowers are generally Safe.
2. The Leaves 'trouble the Stomach' (Salmon)
3. Root bark should not be used in Pregnancy or Yin deficiency.

5. Spirit of Elder berry:
i. bruise Elder berries, leave to ferment in a barrel until they have a vinous odor; distil slowly. (Dispensatorium Pharmaceuticum, 1777)

7. Elder Ointment:
i. Elder flower, prepared Lard (2 lbs. each). Boil the flowers in the lard until crisp, strain.
History
Pliny on Elder and Dwarf Elder:
Copyright © 2015–2021