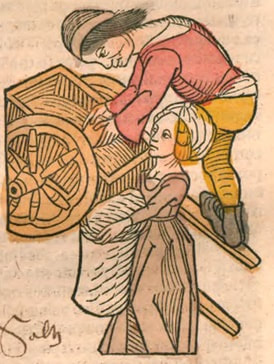 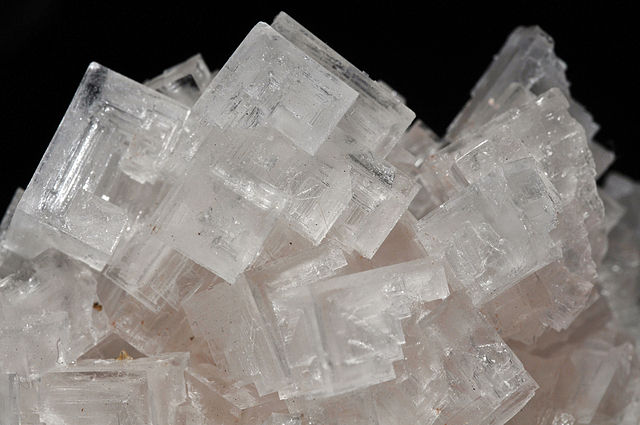 Two main types of Salt are used:Both are similar, but Rock Salt is stronger. Some types of Rock Salt are colored due to mineral admixture. Black Salt is one example.

3. Clears Heat, Cools the Blood, Stops Bleeding:
-bleeding from the Lungs or Stomach, nose-bleeding, Blood in the Urine; used for these conditions associated with strong Heat (half a teaspoon of Salt is taken dry).
-Blood Heat skin eruptions.

4. Benefits the Kidneys, Promotes Urine (Ayurveda, TCM, Tibetan, West):
-Salmon said Salt is ‘good for stoppage of Urine’
-disorders of the Kidneys or urinary tract including Stones, (Tibetan Medicine)
-Salt stimulates the Kidneys to promote fluid metabolism which in moderation, can help to moisten dryness in the body
-Rock salt is said to increase the Semen (Ayurveda)

5. Clears Heat, Resists Poison:
-Malaria and intermittent Fevers, given in the intermission (0.5-1 oz. doses);
-Fevers, poisoning and throat diseases in Tibet.
-antidote to Silver Salts, as well as in poisoning by Bromides and Iodides (10 grams daily).
-A strong Salt solution is a traditional remedy if a Leech is swallowed.
-Salt has a beneficial effect on food poisoning, as well bad food combinations when used as a condiment.

9. Emetic:
-1 teaspoonful given with warm water has been used as an emetic. It is essential to ensure vomiting is induced if such a dose is given.

10. Opens Obstructions:
-Similarly to Saltpetre, Rock Salt is able to enter and penetrate everywhere into the system. (Ayurveda)

12. Externally:
-‘Hot solutions of Salt persisted in are of unfailing benefit in local inflammation of the Lungs, Liver, Spleen, Pleura or Peritoneum, and especially of the Kidneys. Most serviceable in inflammation of the Joints, either traumatic, rheumatic or tubercular in character, and in inflammation of the Throat or Tonsils, either malignant or benign... it is useful in the inflammation of the Brain and Spinal cord and in glandular inflammations’ (Ellingwood)
-sore eyes, burns, bleeding piles, erysipelas, dandruff
-creeping and putrid ulcers
-scabs, hives itches.
-a very good application to bruises and sprains.
-Salt is taken in enemas (1-2 tablespoonful doses) as a purgative.
-as a douche in leukorrhea, inflammation, and sepsis (4 drams in a pint of water) (Lancet, 1915)
-5% solution has been used to wash Wounds
-Used as a gargle, often with a little vinegar for toothache, including that coming from decay.
-A mixture of equal parts of Alum and Salt are made into a saturated solution and applied to toothache with cotton balls
-At the beginning of a cold, it is very good to douche the nose with Salt water, and gargle with the same.
-Salt Water is good as a nasal douche for acute and chronic nasal disorders
-Salt Water gargles are good for chronic catarrhal throat conditions and such things as tonsillitis.

Comment:
1. Medicinally, Sea Salt and Rock Salt are synonymous, although Rock Salt was generally regarded as superior. In alchemical practices, Rock Salt and its Spirit were praised over Sea Salt.
2. The principle action of Salt, both Physically and Chemically, is to dry: ‘This applied to other bodies removes all Humidity, and what is left of the solid substance it astringently contracts’. (Royal Chemistry, 1670)

Preparations:
1. CALCINED SALT:
‘Salt is first decrepitated, lest being put into any hot vessel, it should break it’. (Salmon)
This may be done several ways:
i. By decrepitation where it is calcined in a fire until it cracks no more;
ii. By fusion, where it is melted in a crucible by a sufficient fire.
Main Combinations:
1. Headache, Red Eyes, Cough, and to benefit the Stomach and promote Digestion, with Cinnamon, Cumin, Ginger, Hyssop, Oregano (as in Priests Salt)
2. Indigestion, Poor Appetite, Rock Salt with Emblic Myrobalan, Plumbago, Chebulic Myrobalan, Long Pepper (as in Powder of Emblic Myrobalan of Ayurveda)
3. Indigestion, Wind, Colic, Rock Salt with Asafetida, Ginger, Black Pepper, Sal Ammoniac, Camphor (as in Aksir-e-Riyah of Unani)
4. To purge Phlegm, Rock Salt with Agaric, Chebulic Myrobalan, Ginger, Aniseed (as in Infusion to Purge Phlegm of Mesue)
5. To Purge Bile and Phlegm, Rock Salt with Rhubarb, Aloe, Agaric, Centaury, Ginger, Cinnamon, Aniseed (as in Pills to Purge Bile and Phlegm of Mesue)
6. To Purge Burnt Bile, Rock Salt with Black Myrobalan, Ginger, Cinnamon, Silk (as in Infusion for Burnt Bile of Mesue)
7. Scrofula, Phlegm nodules, Rock Salt with Burnt Sponge, Pumice, Cuttlefish, Long Pepper, Black Pepper, Ginger, Cinnamon, Pyrethrum (as in Powder for Scrofula)
8. Cholera, with Pepper, in equal parts Cider vinegar and warm water
9. Chronic joint pain, dissolve salt in hot vinegar and bathe the part.
10. Hoarseness, Sore Throat, Loss of Speech, Rock Salt with Tumeric, Calamus, Costus, Long Pepper, Ginger, Cumin, Celery seed, Licorice, Ghee (as in Kalya Avaleha of Ayurveda)
11. Gargle for acute sore throat:
i. Salt with Sodium bicarbonate.
ii. Salt with Borax
12. Toothache:
i. Wind-Heat Toothache, Salt with Sophora Ku Shen (Ben Cao Gang Mu)
ii. Salt, Coptis Huang Lian, Camphor
13. Venomous Insect or Snake Bites:
i. apply a paste of onion and salt
ii. apply a paste of salt and sodium bicarbonate
14. Goiter may be treated by applying a paste of Salt, Alum and Borax. This is applied over the neck 3 times daily for 3 weeks.

Cautions:
1. Do not overdose or overuse.
2. Do not give to those with a high Salt diet; a low-salt / Salt-free diet should be observed if Salt is used medicinally.
3. Salt is generally supplied in more than adequate amounts in the diet, and is often taken in unhealthy amounts by many people in their normal diet. The average American has about 17,000mg per day, whereas recommended consumption is about 3000mg daily. However, be aware that a number of people are so worried about salt in their diet that they may be consuming low levels of dietary salt, especially if they cook most of their own food.
4. Excessive amounts taken over a long period harms the Kidneys.
5. Excess Salt injures the Blood.
6. Obesity can be related to excess salt use. Conditions such as Gout, Eczema and chronic Diarrhea can also be associated with excess Salt.
7. Salt free or low Salt diets are required in people with edema (of kidney or heart origin), cardiovascular disease and hypertension.
8. Excessive doses in enemas (9 oz.) have resulted in death.

Main Preparations used:
Spirit of Salt (Hydrochloric acid)
<
>
Click the Tabs above for more information on this Medicine
© MedicineTradition 2015–2022