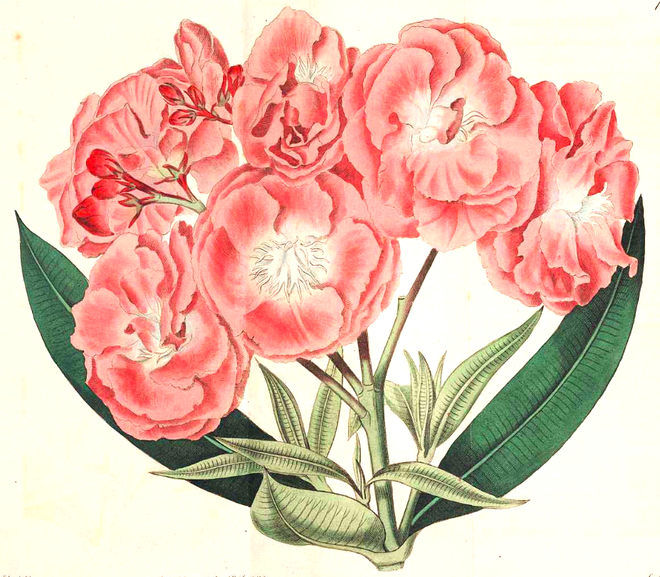 Botanical name:
Nerium spp.:Duke has considered both species as synonyms.

7. Externally:
-oil, paste or decoction used for skin diseases, Eczema, Psoriasis, Ringworm, Herpes, Leprosy (since Charaka)
-oil of the root-bark is especially effective against Leprosy.
-powdered leaf mixed with lard is applied to Pruritus
-Corns, Warts
-Topically for Hemorrhoids
-Alopecia (Sushruta)
-Fistula in Ano
-leaf powder is applied to Wounds to promote healing
-fresh leaf paste is applied to reduce swellings
-root boiled into a paste is used for ulcers and sore of the penis

NOTE:
Some sources have given equivalent uses for Leaf and Root (or Root-bark).
The Root is more powerful to promote Urine and as a Heart tonic.
Leaves are more used to move the Blood, and to purify the Blood. Their use is very similar.

COMMENT:
1. The Yellow-flowered variety is Thevetia peruviana
2. It is one of the Kushthaghna group of herbs in Ayurveda, used for skin diseases

Cautions:
1. Toxic. Avoid overdose. Fatalities have been reported. Children have reportedly died after eating a handful of flowers.
2. Not used in the young, very old, very weak, or during Pregnancy or Lactation.