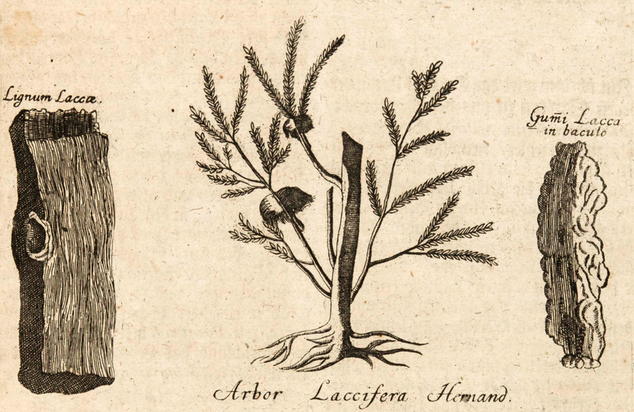 Gum Lacca with one of the source tress
Museum Museorum, Valentini, 1704 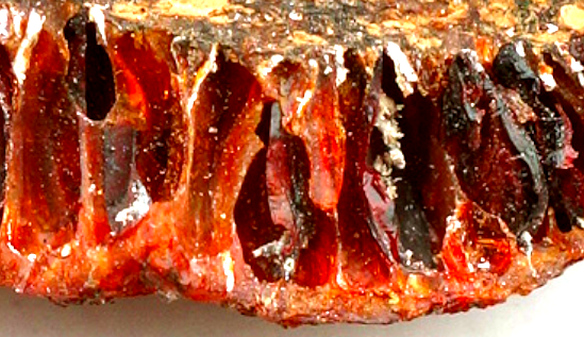 Parts used:
Secreted stick-lac which has been purified
Stick lac is the raw product; Seed Lac, Grain Seed Lac, Shellac, Button Lac and Sheet Lac are all names of the purified product after different processing.
Three main products on the market are as follows:India is the primary source of Lacca, followed by Thailand.

6. Aphrodisiac:
-according to some Ayurvedic and Unani sources;
-‘I have found it to be very Aphrodisiac’ (Taleef Shereef or Indian Materia Medica, Playfair, 1833).
-Premature Ejaculation.

7. Strengthens the Heart:
-regarded as a Heart tonic (Ayurveda, Unani)

10. Externally:
-used for Diseases of the Teeth and Gums-sponginess of the gums, dental caries and other teeth and gum diseases. It is said to be a specific for Caries and diseased Teeth, when used topically. (Ayurveda, TCM, West, Unani)
-applied to Scabies and wet Eczema, Boils and Eruptions.
-applied to Bleeding Wounds to stop bleeding and promote healing.
-applied topically to old, indolent, scrofulous and scorbutic Ulcers.

PREPARATION:
As with other gums, it is softened or dissolved by boiling in water, then strained and decocted until as thick as syrup, then dried.
1. The raw Lacca is heated by a lamp flame and the melted resin falls into a basin of hot water. The pure Lacca falls to the bottom, while waste products and impurities float. It is then removed, dried and kept for use.
2. To prepare it is boiled in a decoction of herbs that enhance it effects such as Rhubarb; sometimes in Lemongrass and Rhubarb; sometimes in Birthwort and Lemongrass; sometimes in a decoction of Hartwort and Fenugreek seed. When melted, it is strained and poured out into thin sheets to dry.

SUBSTITUTE:
1. Dragons Blood
2. Madder
3. Tabasheer (Unani)
4. Seeds of Chenopodium aristatum have reportedly been used by Tibetans in Russia.
Main Combinations:
Lacca is regularly combined with Madder, often also with Rhubarb. Together, they clear Heat and Toxin from the Blood, clear Blood stasis and Resolve Masses and have a general cleansing and regulating effect on the Blood. Also combined for Stones and various other Obstructions.

Cautions:
1. Not used during pregnancy.
2. Large doses can irritate the Stomach

TOXICITY:
1. Assessment of the carcinogenic potential of a proposed food coloring additive, laccaic acid, using short-term assays.
2. Statement on the safety and efficacy of Shellac for all animal species