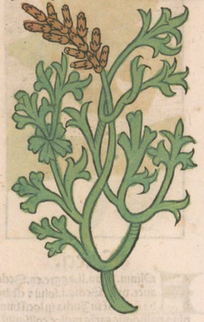 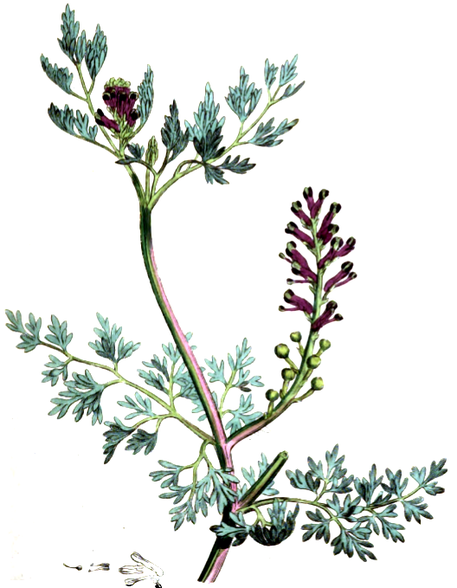 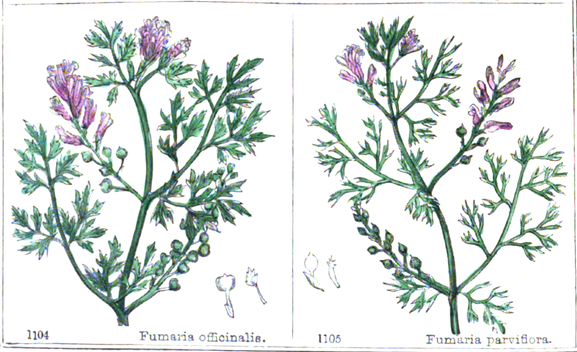 Parts used:
Herb in flower; rarely the Seed
'The seeds of fumitory are stronger' (Avicenna)

5. Promotes Menstruation:
-obstructed and painful menstruation
-claimed by some to benefit Fertility

6. Externally:
-chronic and obstinate skin diseases including Eczema, Psoriasis, Acne, Pimples, Leprosy, either topically as a plaster or paste, or more commonly as a wash or bath.
-wash for Spots and Pimples.
-Boiled in water or whey, or the distilled water used as a wash, it was long used as a cosmetic to improve skin complexion and make it fair.
-wash for Venereal Sores, Pustules and Ulcers including those coming from Venereal Disease.
-wash for mouth and throat sores.
-eyewash for Conjunctivitis, Spots of the Eyes and similar Eye conditions.
-topically for Lice (juice mixed with vinegar or the acid tincture as a wash
-'Fumitory strengthens the gum' (Avicenna)

DOSE:
1. The Seed has the vertues of the Herb, but is regarded as stronger
2. Avicenna gave particularly large doses of Fumitory. Taken in larger doses will act as a purgative.
3. Avicenna also said it is taken with Sugar.
In Decoction: 6–15 grams; Avicenna said 30–200 grams (probably referring to the fresh plant)
Powder of the Herb: 2–4 grams; Avicenna said 10–23 grams
Powder of the Seed: 1–2 grams (up to 3 or 4 grams)
Of the Juice: 2–3 spoonfuls in wine
Of the Tincture: up to 2 or 3 drams

Cautions:
1. Not used during pregnancy.

Main Preparations used:
Water of the Herb, Spirit, Distilled Oil, Dehydrated Juice, Conserve of the Tops, Syrup of the Juice, Extract, Salt of the Ashes

1. Conserve of Fumitory:
i. Fresh leaves of Fumitory (stalks removed) 1 part; bruise until a homogenous mass is formed, then with White Sugar 2 parts, mix to form a conserve. Some used 3 parts of Sugar.

2. Fumitory Juice:
i. Bruise the fresh herb in a stone mortar, express strongly, and clarify by briefly boilings; strain again and preserve it. (Pharmacopoeia Hispana, 1798)
ii. some just kept the freshly expressed juice under a layer of oil which will preserve it for some time.

3. Extract of Fumitory:
i. Bruise and express the juice, evaporate it until one fourth of the powdered herb is required to give it the consistency of an extract.
ii. Fumitory (1 pound), Spring Water (10 pounds). Macerate 2 days, strain, set aside, then decant the clear liquor. Then evaporate to the consistency of an extract.
iii. Bruise the fresh herb in a mortar and express the juice. Add to it half its weight of dried herb and macerate several hours; then heat to almost boiling, strain with slight expression and clarify with the white of an egg. Then evaporate to the required consistency. (Pharmacopee Usuelle, Louvain, 1821)

4. Syrup of Fumitory Juice.
i. Juice of Fumitory, clarified by boiling and straining, White Sugar (of each 3 pounds); boil slowly to the thickness of Honey.
ii. Depurated Fumitory Juice (1 part), Sugar (2 parts). Dissolve in a water-bath. (Pharmacopoeia Gallica, 1818)

5. Distilled Water of Fumitory:
i. Fumitory, bruised (1 part), Water (2 parts). Distil to two-thirds. (Pharmacopoeia Sardoa, 1773)
ii. Some distilled the juice to near dryness to obtain the Distilled Water.