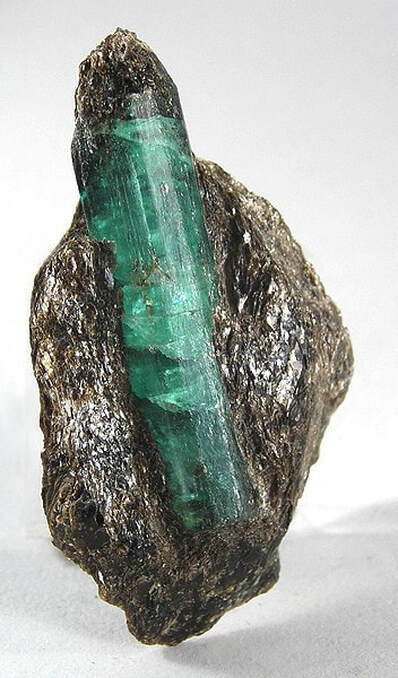 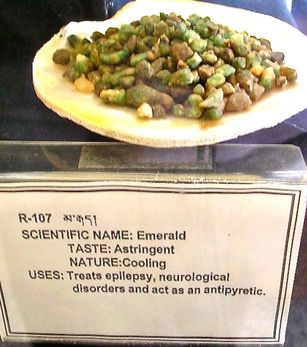 Culpeper said ‘there are 3 sorts; the best comes from Scilicia, and is the softest; the next from Peru, which is harder, and not so deep a color, but more perspicuous and glistening; the third (which is the worst) comes from the West Indies, and is of a dull color, scarce to be seen through; scarce any that come from Peru are without Spots’.

4. Benefits the Brain and Eyes:
-many since Pliny used it to strengthen the Eyes.
-Paracelsus made a distilled water from Emeralds for sore and red Eyes.
-Just looking at an Emerald strengthens the Eyes while relieving sore and strained Eyes
-‘Its Greenness strengthens the Eyes’ (Marbod von Rennes).

5. Clears Heat, Resists Poison:
-biting of a Man Dog or Snake etc (West); regarded as effective against highly venomous Snake Bites in India.
-antidote to the Plague, and ‘all Malign and Pestilential Fevers’ (Salmon)
-Poison including Aconite, Colocynth
-Bhasma of Emerald is used in Ayurveda for infectious diseases, acute Fevers, Syphilis, various Poisons.
-Such is the effect of Emerald against poison that it is said anything growing in an Emerald mine can resist Poison
-all types of ulcers, swellings and Cancer.
-Pleurisy, Pneumonia
-used as a Talisman against all Evil.

6. Nourishes Blood and Essence:
-increases Essence (Ayurveda, Unani)
-Bhasma is used for Anemia and to promote Vitality.
-Essence of Emerald was likewise used for ‘Weakening of the functions of the Spirits proceeding from some long and perilous disease’;
-the Quintessence ‘renovates also the body and bring it to entire perfection’.
-Deficient Heat, Steaming Bone Disorder, Night Sweats
-nourishes the Blood and benefits the Skin.
-Menopausal symptoms

7. Resists Abortion, Promotes Birth:
-applied to the belly to resist miscarriage, applied to the hip to accelerate birth; good to relieve the pain of Childbirth. (Salmon, Schroder)

8. Clears Heat, Benefits the Stomach:
-Bhasma is used for Indigestion, Nausea and Vomiting, and is said to promote the Appetite, and decrease acidity (Ayurveda)
-Hildegard also said it was good for Stomach pain.

10. Stops Leakages:
-‘they stop all sorts of Fluxes in any part of the body whatsoever’, especially used for Dysentery
-Diabetes

Dose:
1. Substitutes should be used due to the toxicity of Beryllium.
Ayurveda uses doses of 60–125mg (up to 200mg) doses of either the Bhasma or finely levigated powder, usually taken with Butter, Ghee, Honey, Rose petal jam or Conserve of Roses, or a suitable syrup. In the West, 200–500mg of the finely levigated powder was a common dose (Salmon)

Comment
Despite still being used in Unani and Tibetan Medicine, the known health risks associated with Beryllium render Emerald obsolete in the modern world. Its use against certain poisons (notable Aconite), as well as its occasional recommendation for Cancer suggest there may be some potent pharmacological effects which could potentially prove useful, but further research is required.

Preparations:
A number of methods of preparation have been used:
1. Triturated Emerald:
Powder in a mortar and pestle with a liquid, usually Rose water; this is traditionally repeated for days. Then the fine powder was passed through silk cloth which only lets the finest particles pass. The fine powder may also be stirred in water, left for several seconds to allow larger particles to sink, then the clear water is poured off and dried, leaving an extremely fine powder.
2. Quenched Emerald
Emerald is heated and quenched in cold liquid until the stones become friable and start to crack. They are then triturated.
3. Bhasma or Burnt Emerald
Bhasma is prepared in India by powdering, mixing with Sulphur, then mixed with Lemon juice and formed into small round discs. These are sealed between clay pans to be burnt in a pile of Cow dung cakes. This process is repeated a number of times.
4. Dissolved Emerald
Some of the processes of the 16th and 17th century dissolved the stones in acid, then precipitated, or else dried and washed well to removes the acid salts.

Cautions:
1. Standard cautions for using Gem stones.
2. Emerald is the only commonly used precious stone to have marked toxicity. Beryllium (primary component of Emerald) is toxic, especially when the dust is inhaled. This danger can be eliminated by preparing with Acids or Fire, or levigating with water or Rose water as was traditionally done. If it is to be powdered, wearing a dust mask and levigating with a little Rose Water would largely eliminate risk of inhalation. However, substitutes should be used.

Toxicity:
1. Primarily toxic to the Lungs via inhalation of the dust or fumes. It is also toxic to other organs (Heart, Liver, Kidney, Pancreas) with chronic exposure. Acute Beryllium Disease manifests like bronchitis or pneumonia and is due to inhalation of beryllium particles.
2. Some research has found up to 6% of workers exposed to occupational beryllium demonstrate beryllium sensitivity, a condition where chronic exposure generates an allergic type reaction.

Antidotes:
Beryllium is a pancreatic toxin. Research showed Gymnema sylvestre to partially protect the pancreas from this toxicity.

Main Preparations used:
Levigated Powder, Bhasma/Kushta (Ayurveda, Unani). Many chemical preparations of Emeralds were prepared.
<
>
Click the Tabs above for more information on this Medicine
Research
1. Zumurrud (emerald): Medicinal Potential of a Gemstone from Jawaharat-i-tis 'a (navratan), in the Perspective of Unani Medicine
2. Beryllium induces TNF-α production
© MedicineTradition 2015–2022