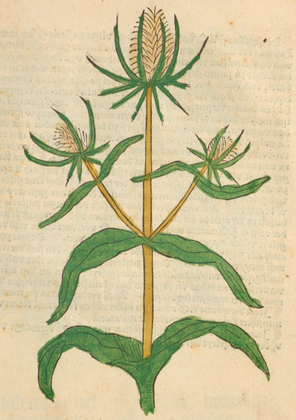 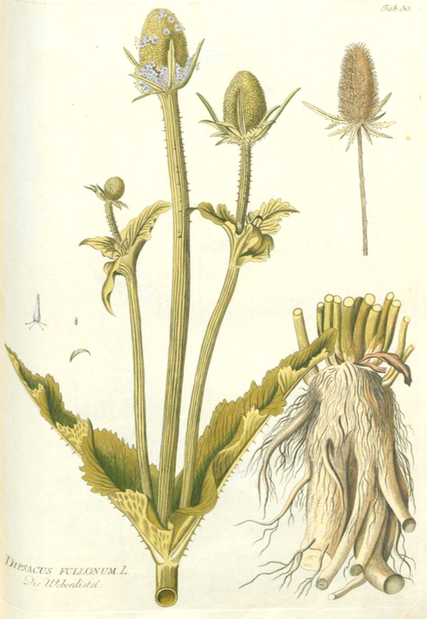 Parts used:
Root; leaf was used externally in the West

3. Externally:
-boiled in Wine and applied to Fissures in the anus; Fistulas
-Eczema, Sores, Felons; good to cure Warts
-Wounds, Trauma
-Red and inflamed eyes (distilled water of the leaves dropped in)
-as a wash for acne, scabs, flaky or inflamed skin (disilled water of the leaves)
-boiled in vinegar and applied to the navel to stop excessive Menstruation (The Secrets of Alexis, 1615)


CHINESE:
1. Strengthens Liver and Kidneys, Strengthens Sinews and Bones:
-weakness or pain of the lower back; stiff joint
-dribbling urine
-spasms and cramps of the sinews (wine-fried Dipsacus)
-protracted taking was said to increase Qi and physical strength.

3. Used for Trauma:
-Bruising and Trauma, especially of the Lower Body
-topically for Sores, Wounds etc.
-wine-fried Dipsacus is most used for this purpose.

COMMENT:
The European and Chinese Teasel are closely related and are similar in appearance. Despite the fact that European Teasel was not commonly used and appears in no traditional formulas, the Western Teasel may be used similarly to the Chinese Xu Duan. Garran, in his Western Herbs according to Traditional Chinese Medicine states that the Western Teasel can be used the same as Chinese Xu Duan.

PREPARATION:
1. Dry-Fried Dipsacus (Chao Xu Duan):
Stir-fried until yellowish, it is believed to increased its warming, tonifying effects, while lessening the dispersing effect. It is most used for Restless Fetus and Threatened Miscarriage.
2. Charred Dipsacus (Xu Duan Tan):
The dried root is stir-fried until scorched and black, but not falling apart or carbonised. It is best to stop Bleeding and is used for bleeding during pregnancy and uterine bleeding.
3. Salt-prepared Dipsacus (Yan Xu Duan):
Dried, sliced root is either soaked briefly in salt water, or is well sprinkled with salt water, then stir-fried until dry. This guides the medicine to the Kidneys and bones, and is best for Kidney weakness with lower back and lower limb pain and weakness, and urinary frequency.
4. Wine-fried Dipsacus (Jiu Xu Duan):
Sliced dried roots are soaked or sprinkled with rice alcohol (Yellow Rice Wine or similar), then sun-dried, dry-fried or oven dried. This makes it better to move the Blood and promote healing, especially of the sinews and joints. It is used for pain, bruising, trauma, dislocations and fractures. It is also used for joint pain and weakness but with blood stasis, as well as spasms and cramps of the sinews.