Polemonium of the ancients; Fraxinella
Bai Xian Pi (Root-bark of the Chinese Dittany) 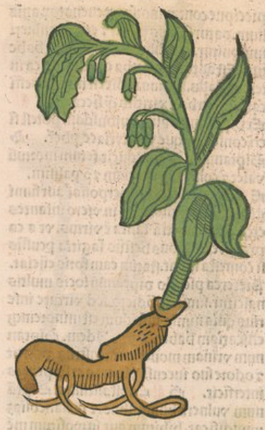 5. Moves the Blood, Promotes Menstruation (West):
-benefits the Womb
-clears obstructions, promotes Menstruation; Amenorrhea, Dysmenorrhea
-promotes Birth and Afterbirth
-has been used for Birth Control in India.
-'But it is dittany that is of the greatest efficacy in cases of this description; it acts as an emmenagogue, and is an expellent of the foetus when dead or lying transversely in the uterus.' (Pliny)

7. Externally:
-boiled in oil for Bruises, Aches, Sprains, Joint-pain etc.
-externally for inflammatory skin conditions, boils, rashes, carbuncles etc.
-powder with Honey was applied to Ulcers or Fistulas, including those in the corner of the Eyes
-powder with Honey was applied to Ulcers, Abscesses and Cancers of the Nose (Wirtzung)
-Extracts darts and thorns from the skin
-the Chinese Dittany is used topically for vaginal discharge with Itching.

DOSE:
In Decoction: 4 ½–9 grams
Of the Powder: 1–3 grams
To promote menstruation and expel the afterbirth or a dead fetus, Pliny said the leaves were used.

NOTE:
1. The Chinese Dittany Bai Xian Pi (root bark of D. dasycarpus) is Cold, dry, and Bitter. It is used primarily to clear Heat and Poison; used for Sores, Carbuncles and Rashes associated with Damp-Heat (red sores with lots of pus), including those associated with Wind (with itching). It is also used for Damp-Heat vaginal discharge with Pruritis. It is also classically used for Jaundice and Joints disorders.
2. The names given for Chinese Dittany are recognised as synonyms of D. alba. Even the Chinese name of the herb Bai Xian represents the White (Bai) form of Dittany. The uses are similar, and while Western writers regard Dittany as Warm, the Chinese view it as Cold. Despite the Chinese Dittany being regarded as cold, it also 'mobilizes the Blood', which perhaps explains its regard of being Warm in the West, as well as its Emmenagogue uses.
3. According to a famous Chinese Physician, it clears Wind-Heat from the Upper body (head and eyes) and Damp-Heat from the Spleen and Stomach (Rectification of the Meaning of Materia Medica, Zhang Shan-Lei)
Main Combinations:
Dittany is often combined with Angelica:

Cautions:
1. Not used during Pregnancy
2. The related Chinese species has been found to induce severe allergic reaction in susceptible people.
3. Mutagenic and Phototoxic effects have been reported (Duke)