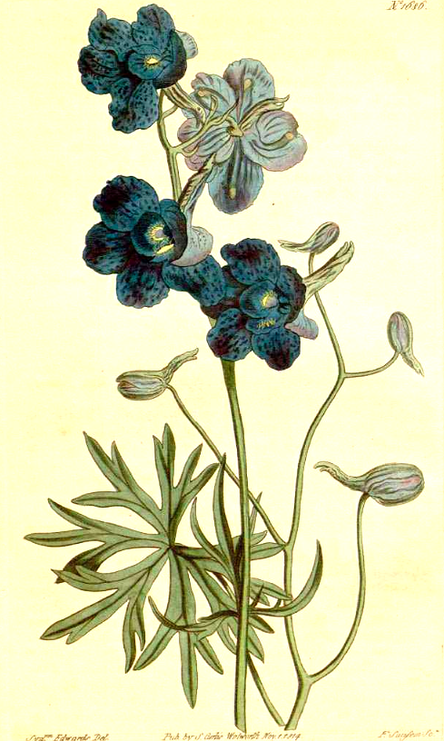 Botanical name:
Delphinium grandiflorum
The Delphiniums are difficult to classify and have many varieties. Over 2 dozen species are reported in the Himalayas and Tibet.
In Tibetan, Bya rkang is regarded as one type of Ti Mu Sa (Delphinium caeruleum), of which there are 3 main types recognised: Also reportedly synonymous or collected indiscriminately are D. caeruleum, D. candelabrum, D. ceratophorum, D. bhutanicum, D. himalayae, D. pachycentrum, D. roylei, D. tatsiense, D. triste, D. trichophorum, D. viscosum
Kletter also lists D. denudatum as one of the plants collected as Bya rkang.

Other species used from different areas for Bya rkang include:
Khare (Indian Medicinal Plants) lists both D. denudatum and D. vestitum as as source of the Ayurvedic drug Nirvisha, suggesting D. denudatum and D. grandiflorum may be largely synonymous (as D. vestitum has also been used as a source of Bya rkang). We have separated them, primarily due to the extensive use of D. denudatum in Unani and Ayurveda, and the relatively sparse use (mostly externally) of D. grandiflorum (Bya rkang) in Tibetan Medicine.